When you need to get a place to eat last minute on a Saturday night, choices are necessarily limited.  Making the most of such difficult circumstances (which was caused by my impulsive decision to eat out), we found a place with decent reviews which was the Cheese Bar, which serves… cheesy cheese.  As so wittily put by my dining companion.

Sounds like a great idea as if you source the raw goods carefully as this type of cuisine should be relatively straightforward to prepare.  There should only really be a modicum of cooking required.  How hard can it be to boil some pasta and potatoes, slap on some ready-cooked meat and then dump cheese on top?

As with many things in my life, I was proven wrong.

It can be fiendishly hard.  Well, at least that’s the excuse I am trying to give the restaurant for the rather bland, tasteless and insipid nature of the food.  You could also perhaps extend this excuse to the rather bizarre service.  Generally, if the serving staff are running around like chickens with their heads cut off, it bodes badly for the food as if they can’t get their act together, what might be happening in the kitchen? 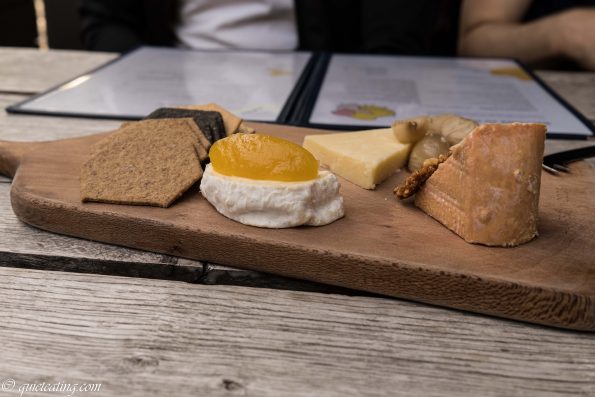 From left to right, Bix, Quicke’s Clothbound Cheddar, Highmoor.  The first selection appeared rather speedily.  Even if it was simple to prepare and really not that astounding.  The cheese flavours all seemed to run together to produce something I couldn’t really pick apart.  There were differences in texture but in taste things were rather more challenging.  Generic cheese seems to be the most favourable description I could provide. 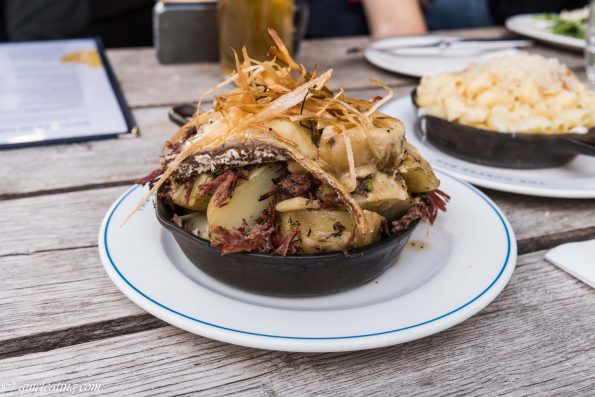 Blue Cheese Raclette, Young Buck, Salt Beef, Leek, Potatoes, Truffle Honey.  It was a bit of a challenge to get this.  I had to chase multiple times for this, which was not something I was expecting as cheese doesn’t really move that fast.  It only appeared after having to confront staff on multiple occasions asking what was happening to our food.  It finally arrived but they forgot to give us knives.  And then when they brought us knives, they forgot the forks.

While I know that I can be annoying at times, when I’m paying for service, I expect to be listened to at least a little.  So I was surprised that when asked for service (can I have something to eat with please?), the response was various hand gestures.  Although these were mainly incomprehensible, I did wonder if a rather rude statement was being made in my general direction.  Although this is sometimes justified by my behaviour, on this occasion I beg to differ.

Putting aside such challenges, as for the taste, this seemed like melted blue cheese on beef and potatoes.  I’m not sure how they could justify calling it raclette.  It is a bit like claiming that a prawn is a lobster.  Even the largest specimens of such fall far short.  In this case, I don’t think the name raclette would like to be sullied by such ineptitude in preparation and service. 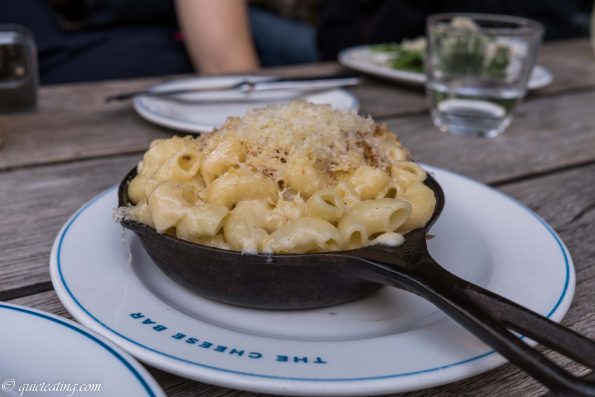 Five Cheese Macaroni, Montgomery’s Ogleshield, Quicke’s Cheddar, Lincolnshire Poacher, Brue Valley Mozzarella & Cornish Kern.  However, the previous can be bettered, i.e. demonstrated that worse crimes can be committed.  This five cheese dish promised flavour, nuance in taste and varying texture.  Instead, it was like a congealed blob of reconstituted milk.

Now, I’m used to people not taking a liking to me.  According to my friends, it goes with the territory given my sometimes sharp tongue.  However, although I have been at times scolded by waiters, burned by them or otherwise told to leave the premises, at least it is clear where I stand in their eyes.  Mysterious hand gestures leave too much ambiguity with me.  Although, perhaps that fits as it is a reflection of the food too.

Dinner (2 courses) was GBP 25 excluding drinks and rather bad service.