I make no comment about the name of the restaurant.  Admittedly they could have tried for something more esoteric.

However, I shouldn’t really complain that much as it’s not like I run a restaurant.  I just like to criticise them, that’s much easier.  Yet as compared to an armchair critic, at least I put some skin in the game as if the meal doesn’t turn out that well, I have to suffer (a bit). 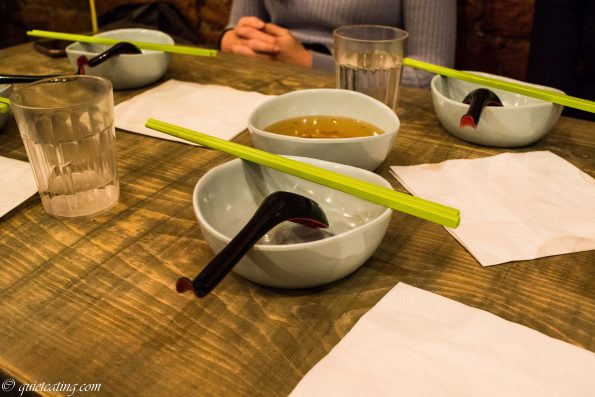 Placing.  All plastic, it reminded me of hawker stores in Malaysia.  Almost unbreakable plastic makes for good serving instruments.  Doesn’t matter if your customers are a bit heavy-handed. 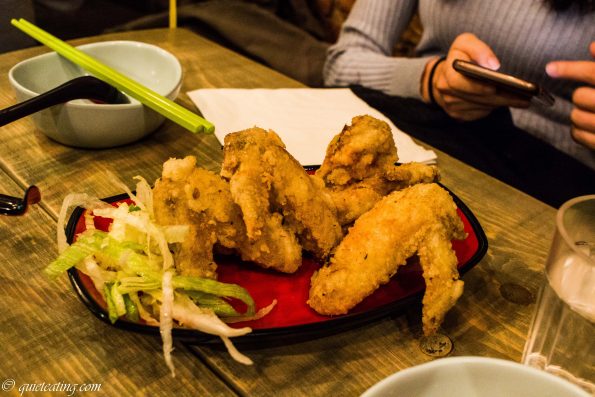 Canh Ga Chien Nuoc Mam, deep fried chicken wings coated in spicy fish sauce.  These were surprising.  Surprisingly good.  Crunchy but springy exterior.  Flavourful chicken skin and meat.  Brought me back to memories of better times when I would devour my way through a chicken wing mountain.

Wouldn’t feel that good after but that is another story. 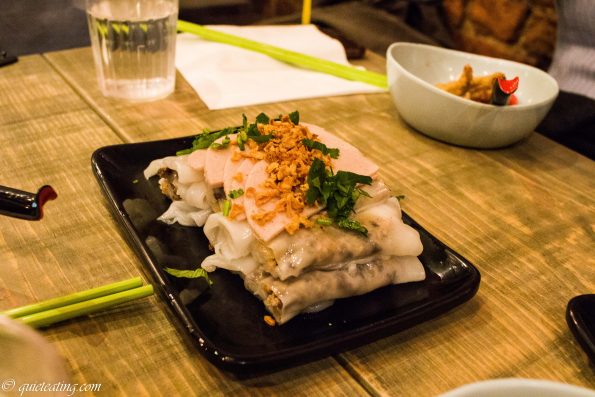 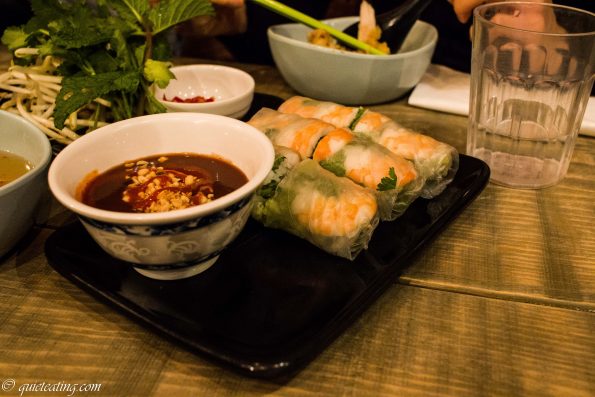 Goi Cuon, summer rolls with pork, prawns and salad served with hoisin sauce.  Then again, the banh cuon was far more flavourful that the goi cuon even if the latter benefited from vigorous dousing in sauce.  I know they are supposed to be clean tasting but that doesn’t mean that they should lack taste of almost everything. 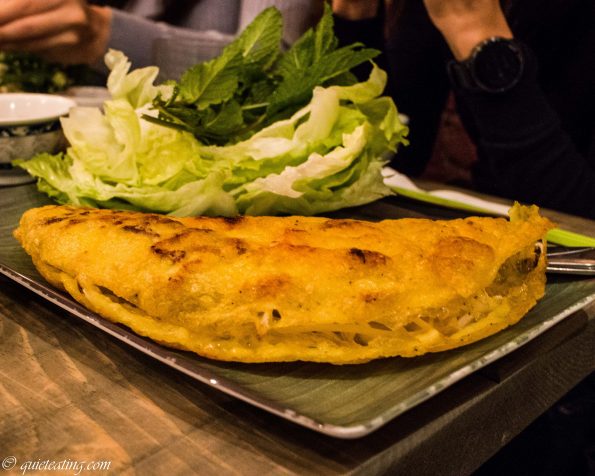 Banh Xeo, crepe filled with pork, prawns, onion, bean sprouts and salad.  Crunchy egg outside but the inside seemed to be lacking something.  Like taste.  I would say that this is something to avoid but that seems to be what the taste was doing. 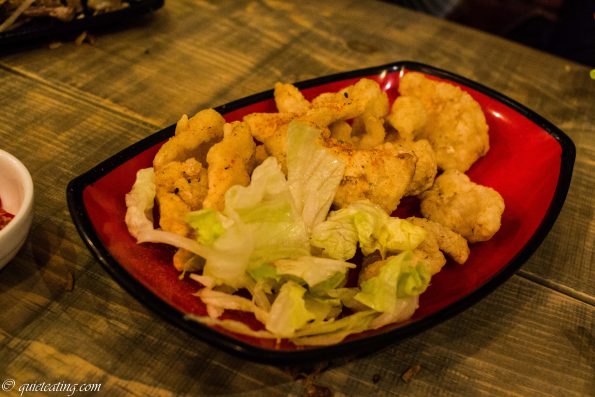 Muc Chien Gion, deep fried squid in garlic butter and chilli.  Decent but when the spice was not correctly added, suffered from the problem of almost all the food that had come before.  Lack of taste.  Better to go for the chicken wing version. 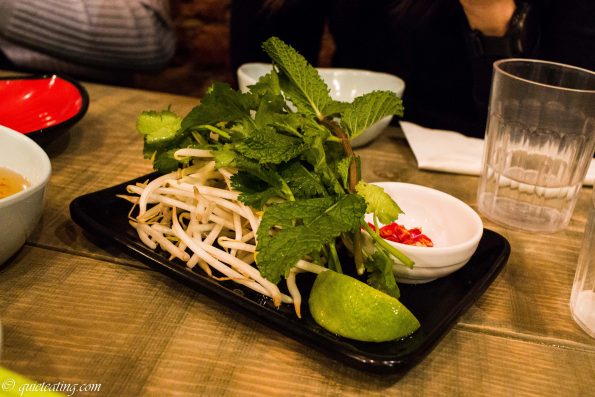 Basil, bean sprouts, lime and very very hot chilli.  Careful with the spice here as this seems that they stored up the lack of taste elsewhere and packed it into the chilli.  Almost enough to blow your head off. 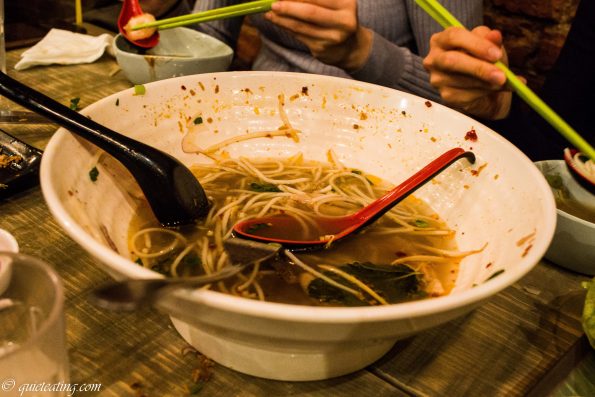 Pho Chin, well done beef flank noodles soup with fresh herbs.  Sadly gone before I had a chance to take a photo.  Which isn’t to say that it was really that good as the soup was rather flaccid and lacked much depth of flavour.  Kind of like budgetary announcements recently. 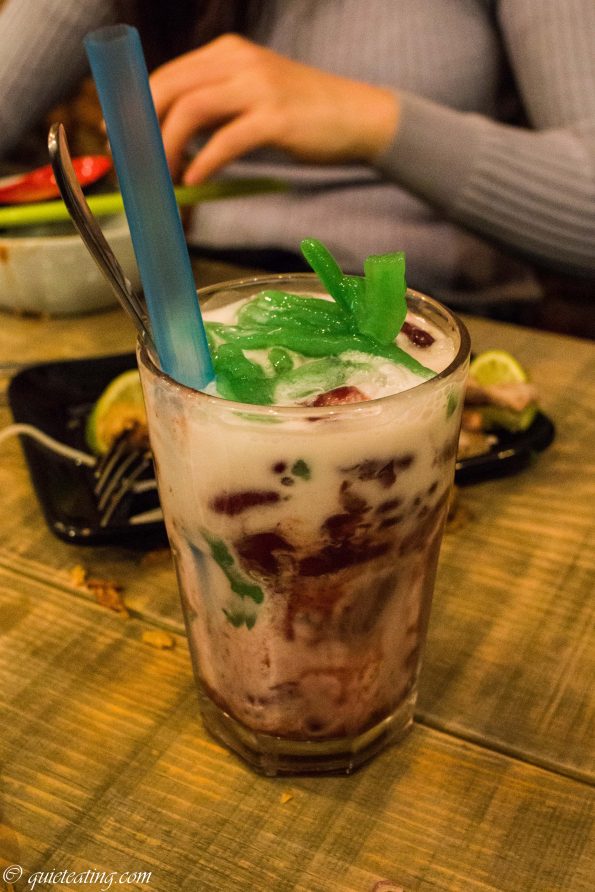 Che Ba Mau, three coloured desserts with red beans, green jelly and coconut cream.  White milk, red beans and radioactive jelly.  What is there not to like?  Tasted quite good too then again might have been the sugar doing its magic among the rest of the insipid food. 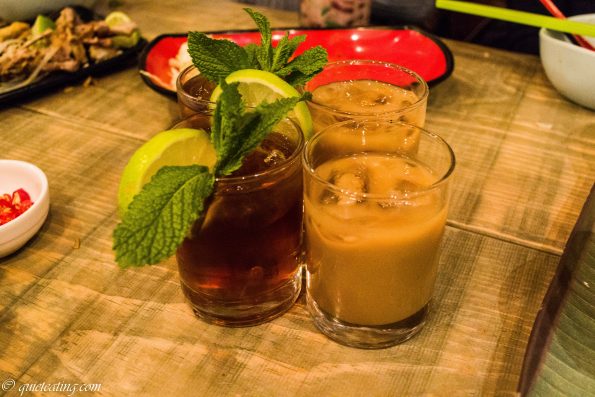 It was a nice place.  Not too crowded with a wide selection of food.  It definitely felt like a cafe rather than the more cavernous and conveyor belt Cafe East nearby which offers similar fare.  However, if you are looking for the best, or even one of the better phos (or Vietnamese foods) in London, you would be better served elsewhere.

Then again, if you don’t feel like fighting the crowds and potential contamination by other diners, perhaps this is a better alternative.  It might be a bit bland but perhaps that is the flavour of safety.

Dinner (2 courses) was GBP15 per person excluding drinks and service.