Too bad it is hard to find without paying an arm and a leg.  My introduction to how good pasta could be was at Locanda Locatelli.  Unfortunately that was not somewhere I could afford to often frequent.  Several years after that visit, Padella opened.  It was great pasta and the low price made it taste even better.  Unfortunately prices have increased significantly so although it is still slightly below the average, it is nowhere the bargain it was.

I would have thought that inflation should not really have touched pasta so dramatically as I thought that wheat and eggs were not really affected by inflationary pressures so significantly.  With such spiralizing increases in food costs, I can only hope that the increasing UK base interest rate puts some type of break on restaurant prices. Otherwise, I will have to find a new hobby. 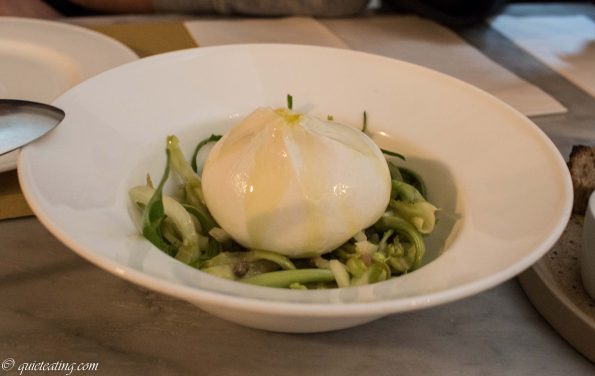 Burrata, Puntarelle.  I do not know how to judge a buratta.  It seemed ok to me but that is a judgment bourne out of pure (rather than my usual partial) ignorance. 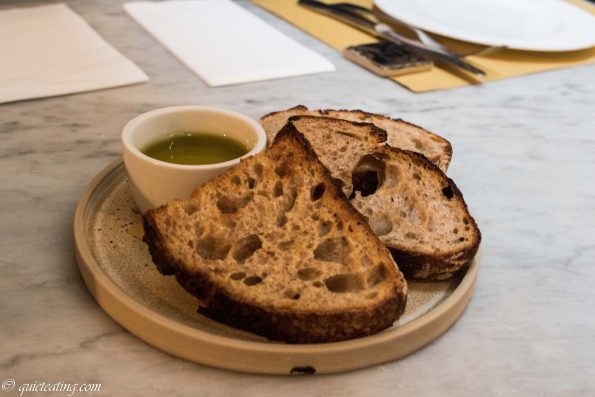 House sourdough, extra virgin olive oil.  On bread, I am able to provide a more critical (although perhaps still largely uninformed) view.  Bouncy yet crispy, this bread was a delight. 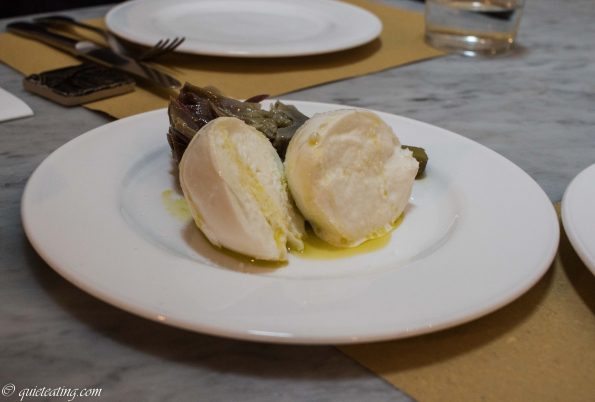 Buffalo mozzarella, artichoke roman style.  Another Italian cheese to challenge the nuances of my taste buds.  Although I was not at a loss for words, instead I could just use that annoyingly neutral and uninformative adjective.  It was nice. 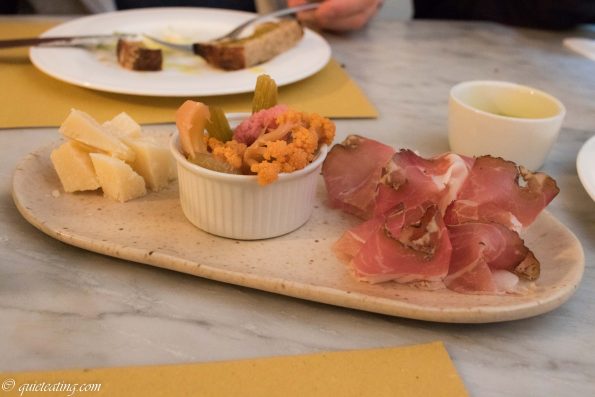 Speck, parmigiano, house pickles.  This mixture was delightful.  Meaty unami ham, tart and crisp vegetables and creamy and fulsome cheese.  This was great although would have been nice to have slightly more of this. 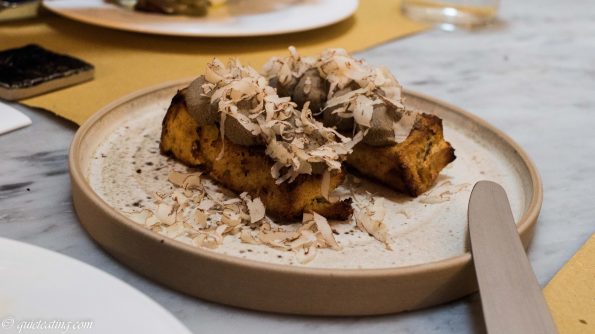 Chicken liver parfait, toasted panettone, pecan.  Kind of weird.  The portion I ate had a strong taste (not hint) of lemon.  So much so that I speculated out loud to my fellow diners that perhaps I ate the bit which hadn’t had the detergent rinsed off as they did not suffer this particular problem.  Putting aside that, I guess these were ok. 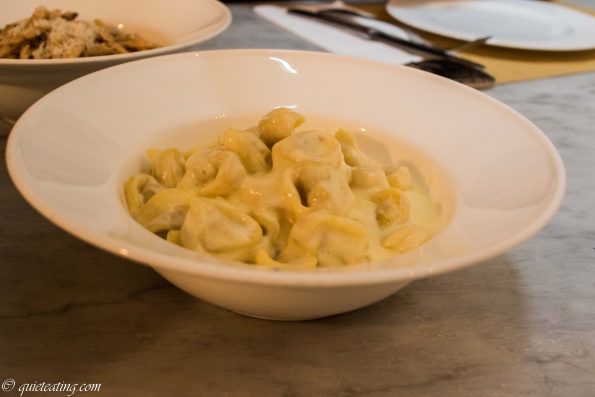 Tortellini Bolognesi Parmigiano cream.  This was… creamy.  It was also perhaps the best pasta of the meal.  The various elements of cheese, cream, meat and flour did not overshadow each other but instead worked together to make something greater than the sum of their parts. Worth trying again and again. 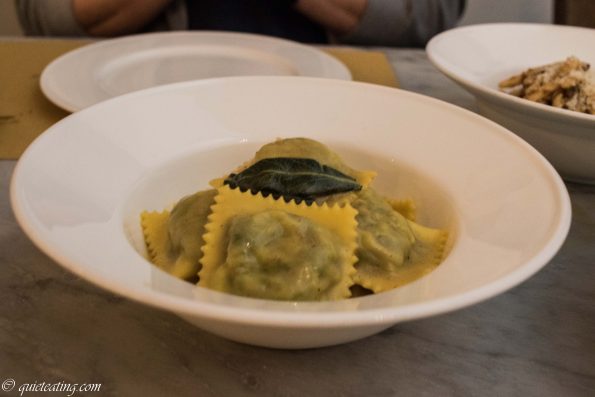 The signature, agnolotti cavour, beef, pork, spinach ravioli, butter and sage.  I did wonder who’s “signature” the description of this dish was referring to and was tempted to inspect these to see if they were autographed but I resisted the impulse (and possible derision of my fellow diners). These were meaty yet not too heavy.  Enjoyable especially as they were not slathered in a heavy sauce, so able to stand up on their own without distracting fans. 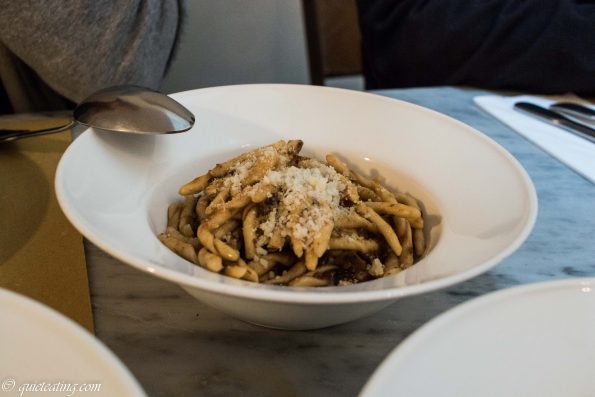 Strozzapreti, Ligurian style porcini and tomato sugo.  These were disappointing.  Not something that I was necessarily want to try again.  The pasta was ok but the sauce let this dish down as it didn’t have much depth of flavour.  If I was the pasta, I would be unhappy to meet my demise alongside such a measly specimen of sauce. 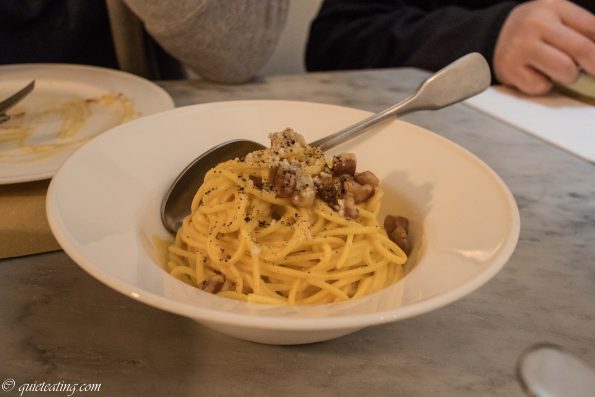 Tonnarelli, classic carbonara.  Overheard from the table next to us, this was the best carbonara he had ever had in his life.  And he looked to be about 50, bespeckled and bearded.  In the mistaken belief that someone looking like they had some gravitas (he was also substantially larger than me), we decided to give this a go.

It didn’t change my life.  In fact, it made me think that the price of admission was not worth it.  I know that there is being nice and supportive to people about their cooking but such stratospheric comments are going a bit far. 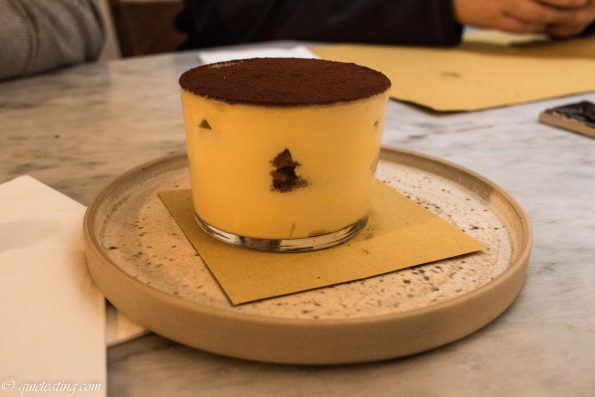 Tiramisu.  This was ok but that’s about as kind as you could go.  The cocoa on top was rich and overpowering, the filling less so.  A bit disappointing.  Although there is a great dessert place around the corner so I wasn’t particularly concerned that things were not working out so well.

Perhaps in a sign of the times, a small three course meal fetched a rather high price.  Although I know restaurants have had it tough over the last few years, so has the rest of the world.  So now that they are back to normal service, I would have hoped that the higher price would have fed through to better food, ambiance or creativety.  At Burro, the food was not bad, it just wasn’t really worth it.