So one day I was feeling a bit abandoned and lonely.  So what better than to return to the City on a weekend to relive the nostalgia of work.  I never feel alone in the office, even at 2am at night.  The janitors keep me company.  Anyway, on the office theme… 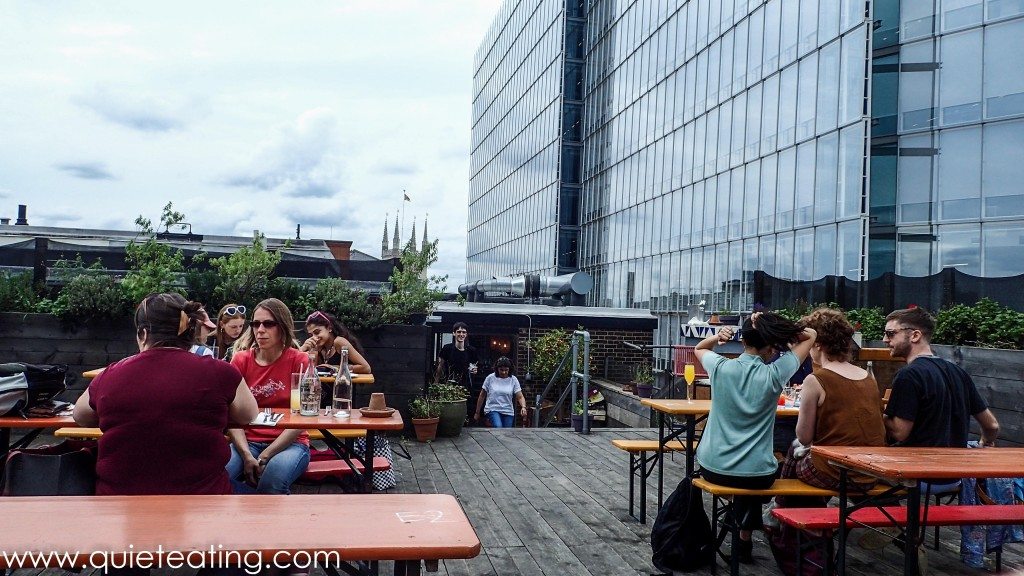 The Rooftop Cafe, a lovely little restaurant sitting on the top floor of a building in London Bridge, right next to many many office buildings.  Hidden in a very unexpected location, trying to get to the cafe, I began to build up a bit of an appetite.  I had to search for a secret door buzzer, brave a rather dingy stairwell and endure a seemingly endless corridor to unexpectedly emerge to this.  A bright and happy outdoors area nestled between office blocks.  However, enough of my distracting commentary, onwards to the food. 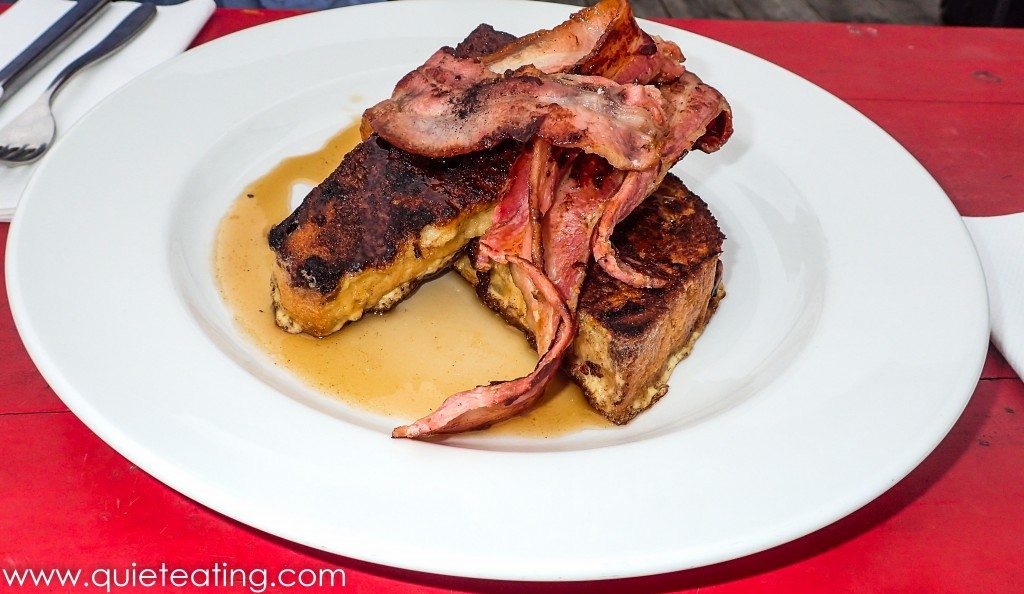 French toast, bacon, raisin brioche and maple syrup.  A dish that just screamed brunch to me.  Well, I’m sure the pig would have screeched when being led to the slaughter house, but you know what I mean, metaphorically, of course.  The bacon was good, thick and gelled well with the French toast and maple syrup.  I am not one to usually partake in brunch but my eating companion remarked this was one of the better toast, bacon and maple syrup combinations he had had.  As a virgin to this type of food, if I had to guess, I would agree. 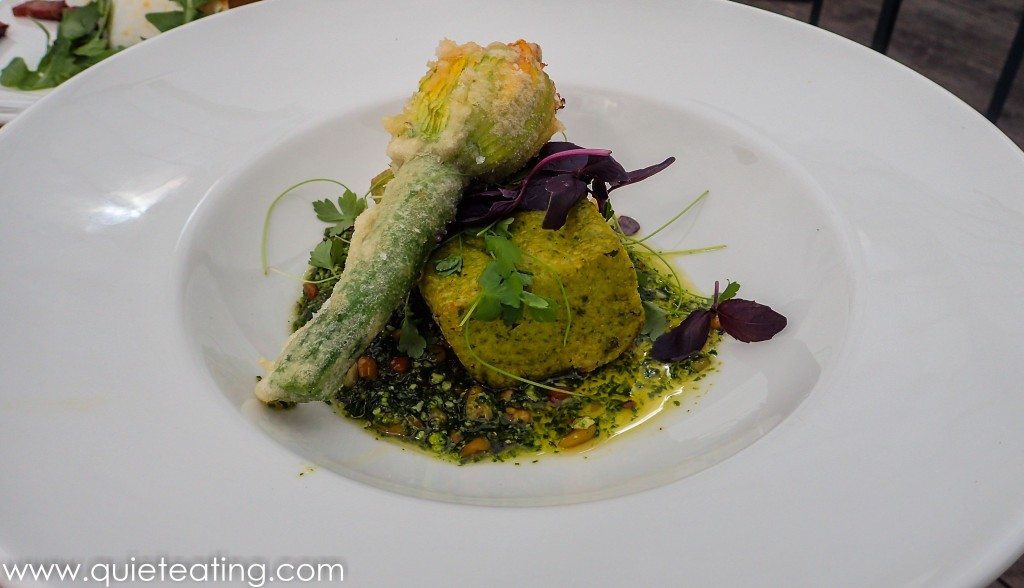 Green polenta, courgette flower, pine nut ricotta and pesto.  I thought that this was the highlight of the meal.  Literally, as it was the most expensive dish at, shock, horror, GBP13.  Yep.  Almost double all the other dishes we were to have.  This dish was creamy with just the right amount of savoury bite from the pesto and courgette flower.  I especially enjoyed the fresh pesto and pine nut dressing which added some body to this otherwise light dish.  Being new to polenta (I thought it was a piece of cow at first) my initial experience with this grain was enjoyable and exciting.  Thank you Rooftop Cafe. 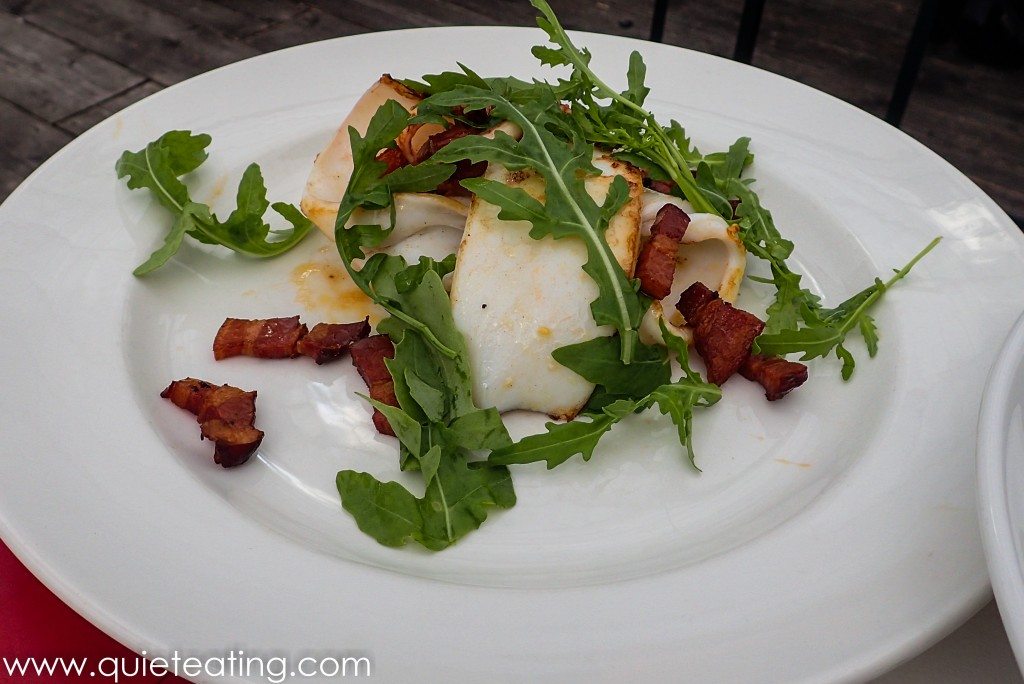 Charred squid, pancetta, creme fraiche and rocket.  Here, I finally got to have my cake and eat it too.  Or actually, maybe it’s more appropriate to say that I had my pig and got to eat it too.  Here, I think I have identified my linguistic challenge, polenta is not the same as pancetta.  Doh.  Having overcome this epiphany, the squid impressed me even more as it was cooked just right avoiding the rubbery feeling of the many squids I have known.  Besides not being a challenge to cut, the al dente squid had a taste of the sea which brought me back to days of holiday gone by.  It brought back happy memories of lounging by the beach, an unexpected feeling in London Bridge… 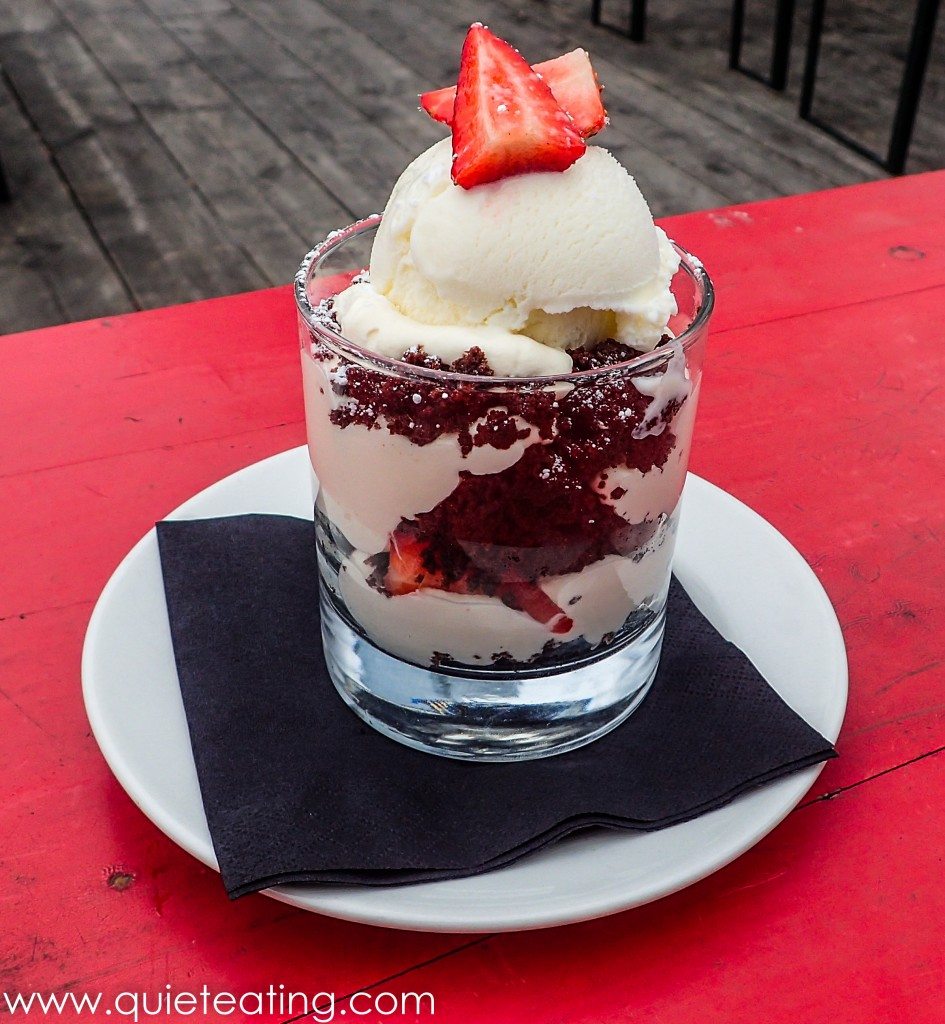 Chocolate, strawberries and milk ice cream sundae.  I must confess here to being a bit puzzled.  What is milk ice cream?  I thought that all ice cream comes from milk…  Or maybe this is something that office workers are not supposed to know…  Maybe what they meant here is that it was a very mild ice cream which seemed to almost be flavourless.  Which meant that it almost felt like eating chocolate and cream.  Unfortunately, it seemed that the strawberries were not that ripe and lacked that sweet bite which kept this dessert from being outstanding.

While enjoying a chilled lunch on a rooftop and staring into deserted offices, we slowly managed to unwind.  While eyeing the little cubicles in the nearby offices, which reminded me of hamster wheels, thoughts of returning to the work rat race never crossed my mind.  If I worked around the corner, this would be my go to place when I needed a bit of a breather from work.  Unfortunately, we were informed that today would be the last chance to savour this rooftop utopia, as they are being destroyed.  Let me clarify here, the restaurant is getting bulldozed.  So they are migrating and reopening in September in nearby Bermondsey street.  Along with other hip, trendy and good restaurants, it sounds like a much more suitable location for an unexpectedly good restaurant.  See you there in a couple of months.  Hopefully without the Easter egg hunt to find their front door.