I find online booking sites rather weird.  They can be quite obtuse at times.  Case in point being that for 00.

Such as when restaurants undertake cheap tricks to try and create an air of exclusivity.  Although I can be annoyed rather easily, this was not starting off well.

This restaurant’s site said that it was so busy that I was restricted to very limited timing for booking.  It seemed that every other time I wanted to go was booked out.  When I finally managed to get a booking, this meant that when I finally got there, it would be crammed full.  Yet, I was the only diner when I arrived.  It wasn’t just me as when the rest of my party arrived, for next 30 mins we were the sole table and then only after about an hour were we joined by two other diners in the corner opposite us.  On the bright side, at least it could be described as spacious and airy. 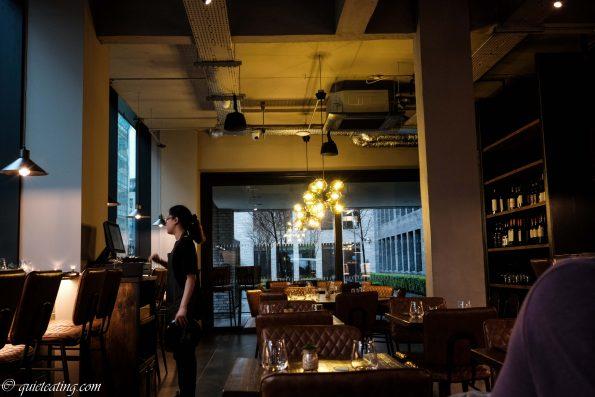 Here is the evidence.

I know that there is some value to creating hype by making things difficult (no booking restaurants, I am looking at you) but this is a bit much. 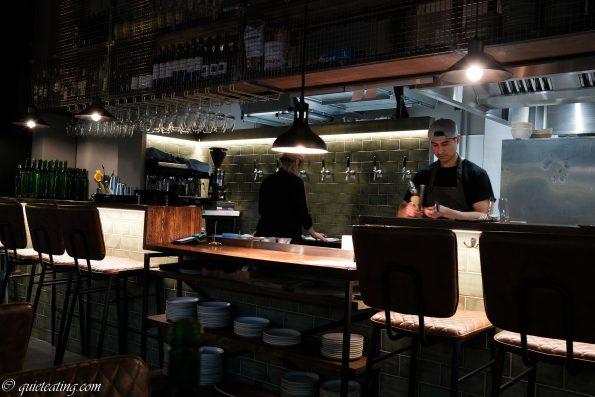 Another problem with low customer numbers is potential staff disengagement.  The chefs looked very bored.  As we were to find out, that would be reflected in the food as well. 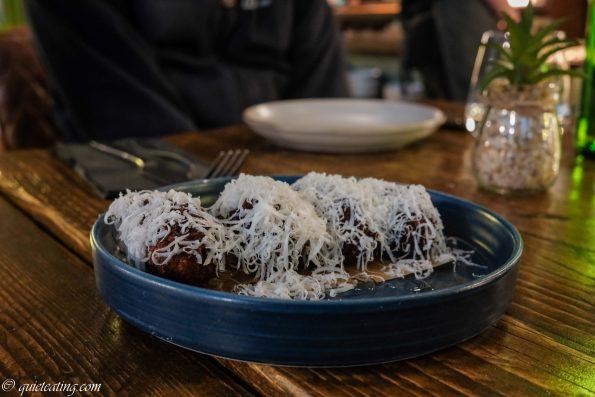 Croquette, aubergine & nduja, ricotta salata, honey.  This was burnt on the outside.  Perhaps the chefs got so bored that they forgot to take this out of the frier.  Even ignoring this mistep, the inside was very weird as a too sweet and too salty filling with a cheesy topping confused my palate.  A mishmash of sweet, meaty, salty and then overpowering sweet again lead to something rather mediocre.  Each croquette was not cheap either. 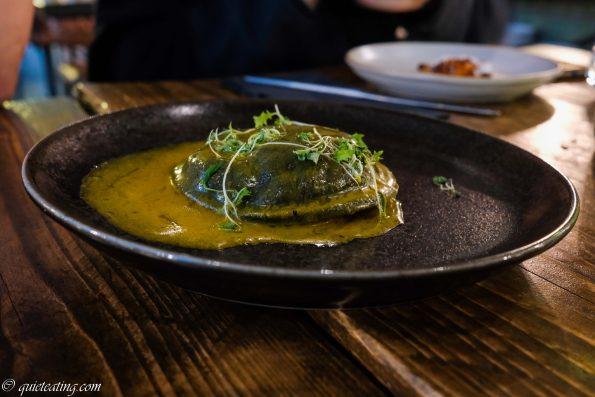 Ink Raviolo Bergese, egg yolk, crab, tumeric butter, mizuna.  In the same way as the previous dish, this rather large (and pricey) raviolo promised much on the menu description.  However, on the taste test, I couldn’t really sort out the flavours in this one.  Could have been an unidentified mash of left over filling shoved into a pasta casing.  If that was the case, at least it would be an explaination of what I tasted.

In any case, putting such starters behind us, we came for the pasta and I feverently hoped that disregaring the raviolo, the rest would be better. 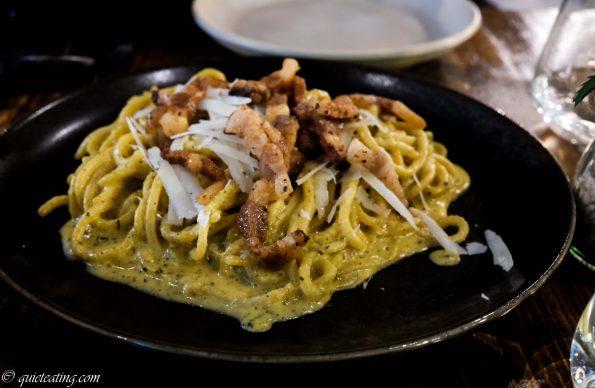 Spaghetti, truffle carbonara, crispy guanciale, pecorino romano.  Probably the best dish of the day.  Al dante pasta with crispy fried bacon in a thick cream sauce.  Delicious even if the pasta was a bit overdone.  Although I would be disturbed if this techincally simple dish failed. 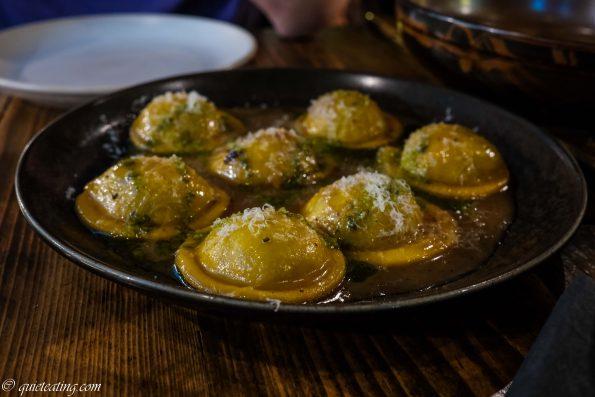 Occhi, lamb shank genovese, sour parsley, aged provolone.  A very weird dish, it confused the palate and the sum of parts ended up less than its constituants.  As the lamb shank tasted like it had an overzealous application of sugar which overpowered other elements.  It looked pretty though. 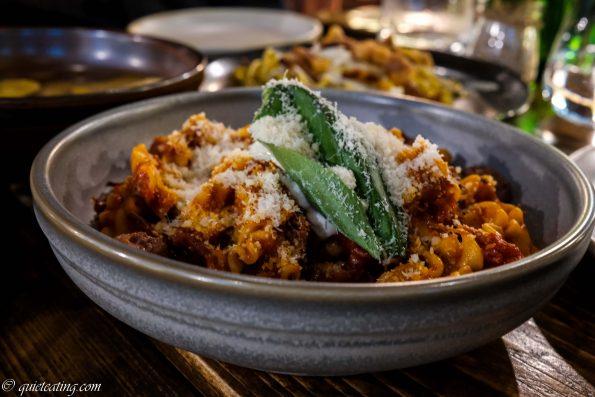 Curly pappardelle, beef short ribs ragu, meatballs, burrata, basil.  I couldn’t really find the meatballs here.  Instead, it was much more a ragu.  Maybe this was an error in their menu punctuation.  The pasta was fairly decent as cooked sufficiently here.  The basil on top seemed like an after thought as I couldn’t really taste it in the food.  So perhaps a charitable way of describing this dish was that at least it was a decent size. 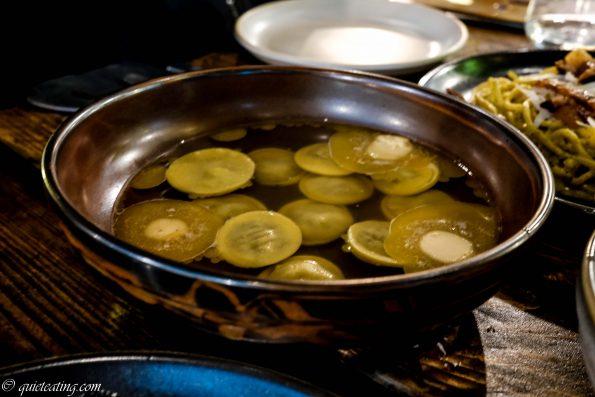 Angolini in smoked shiitake broth, prawns stuffed, soy & garlic butter.   I couldn’t really taste the prawns at all.  All I could taste was rather al dente (and sometimes the wrong side of al dente) pasta.  One of my fellow diners remarked that it was “mushroomey”. Although such exacting use of terminology was beyond my understanding, I know where he was coming from as these tasted as if pasta dough was boiled in mushroom broth so leaving alot to be desired. 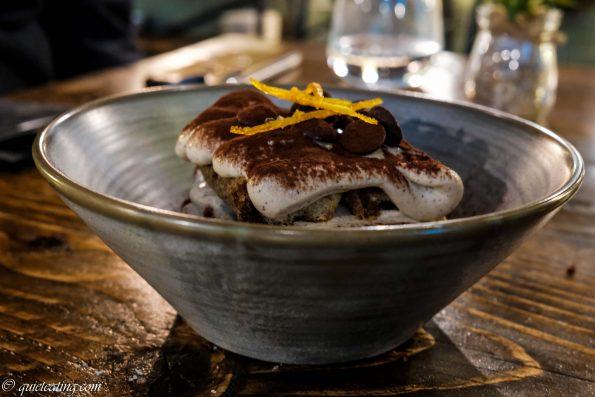 Crunchy tiramisu corretto, orange zests, cointreau.  Coming across in the popular “deconstructed” style of cooking, when we bit into this it was clear why it was so.  It was to preserve the crunchy element, as this came from not soaking the fingers very much at all.  The rest of the dish was fairly uninspiring.

This meal was had on 31 Dec 2022, when many other restaurants are not closed, so beggars can’t be choosy.  Although, I don’t think beggars could be expected to pay this price.  Especially as during the meal, the water to the bathroom cut out.  I know that I complain that the food was lacking in a spark, eating with unwashed hands is not a way to solve that.  Well, at least I hope that the kitchen staff did not suffer from this issue too.