Apparently Nopi stands for North of Piccadilly.  With such a clever play on words, I expected the food to be short and precise, reflecting the name of the restaurant. 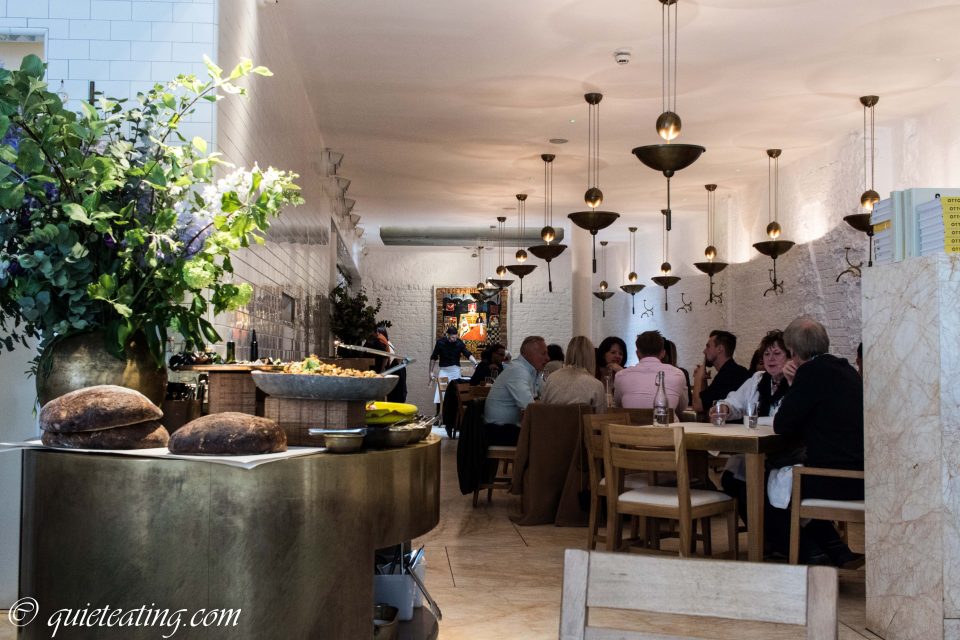 The dining room, with white and minimalist decor in a high ceiling cavern only served to reinforce this perception.   The scrupulous looking salad on the left and freshly baked bread also helped to suggest that if you only live once (YOLO), this would be somewhere that you would probably want to try.  Appearances aside, it was now my turn to give it a test. 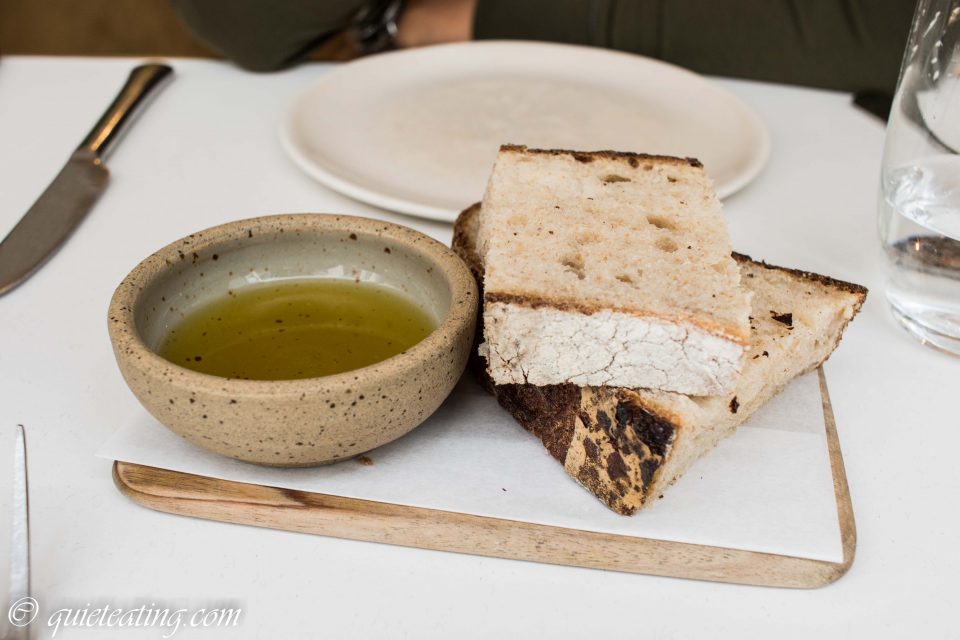 Bread with olive oil.  The bread was excellent, appearing on a tasteful wooden board and a side of olive oil.  With a soft, bouncy and delightfully plain interior with harder and earthly tasting exterior, this was a good start. 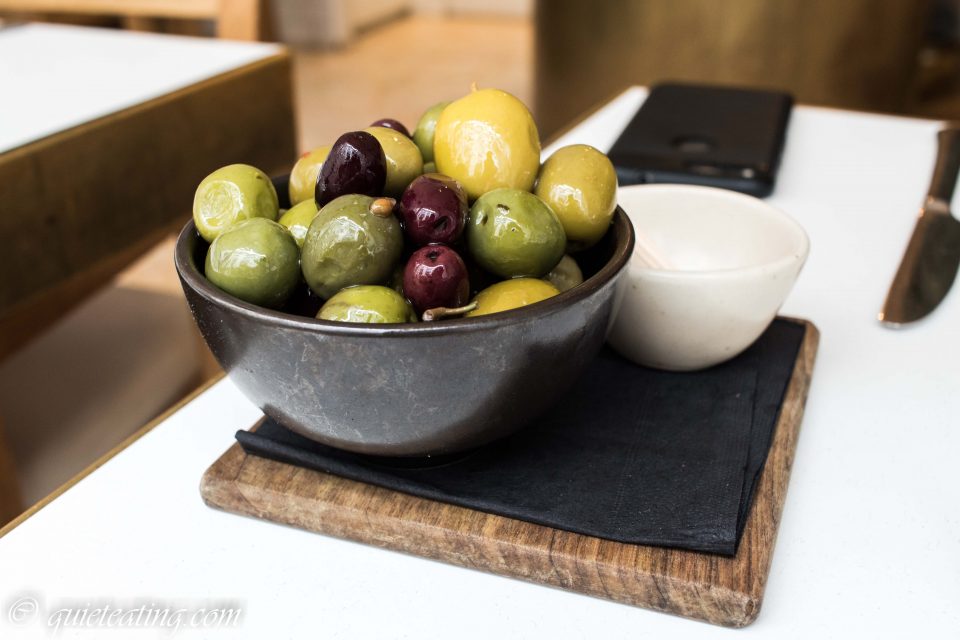 Marinated olives.  These went well with the bread and they fulsomely tasted of olive.  Not like inferior olives I have known. 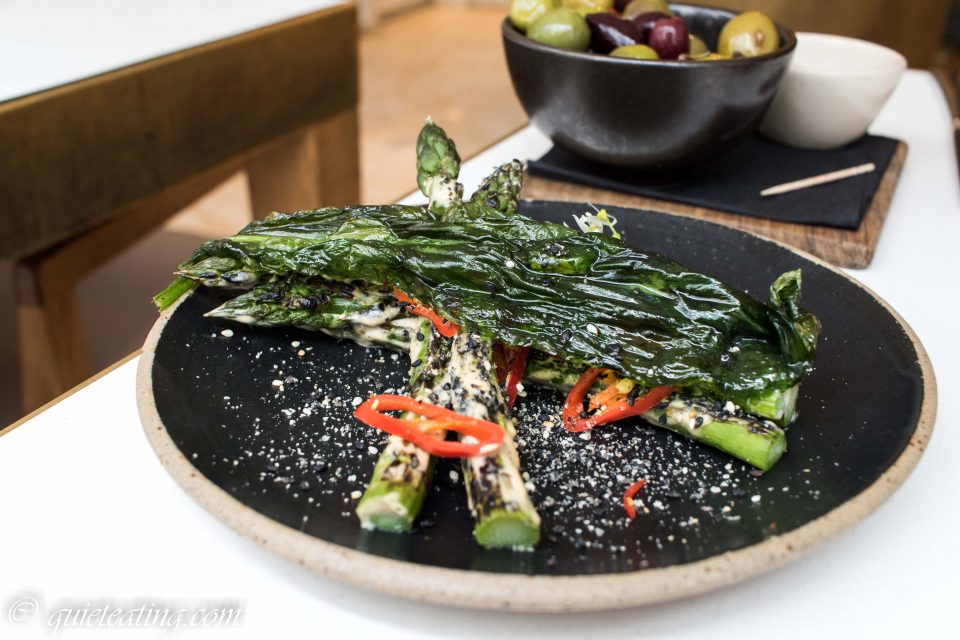 Asparagus, miso tahini, wild garlic, pickled chilli.  With carefully calculated fiery tint added by the chilli, the garlic and tahini served to highlight the clean (and healthy) taste of the asparagus.  The only issue was that there was not more. 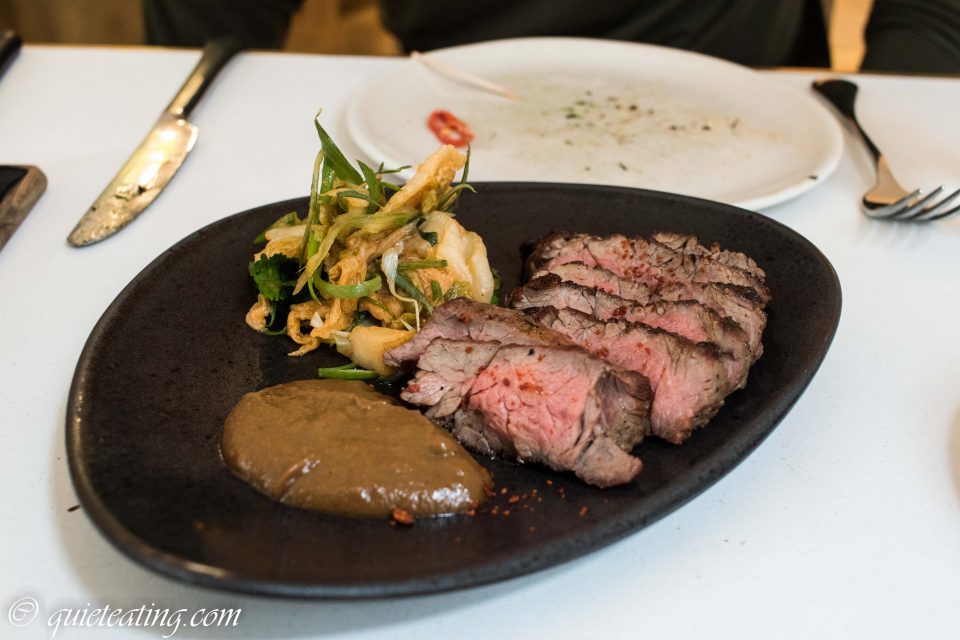 Lake District beef bavette, kimchi, shiitaki ketchup.  The mushroom sauce was interesting, especially when beef was added to the mix.  A different take on mushroom steak, this worked well. 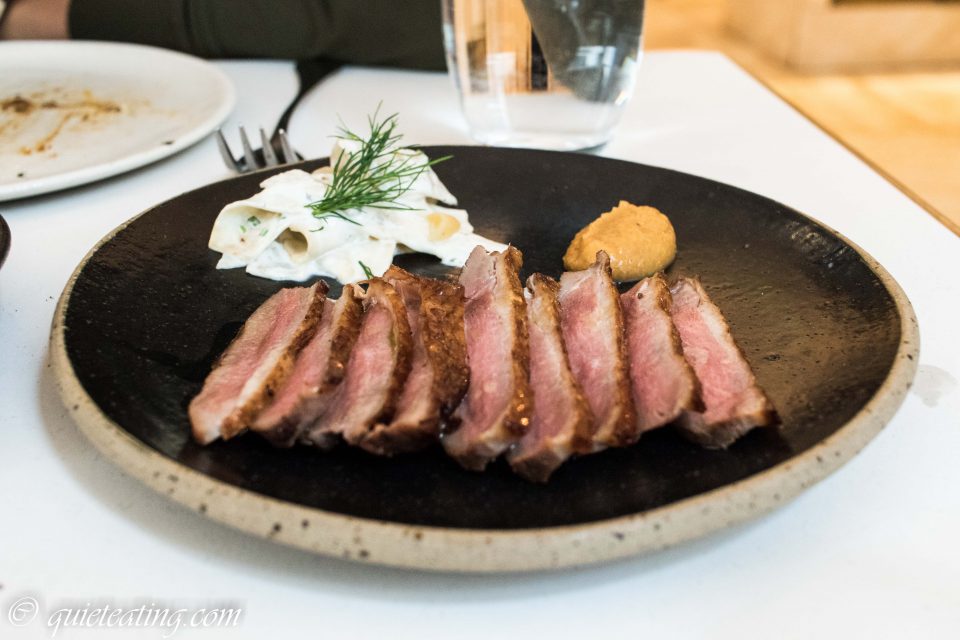 Soy cured smoked duck, loquat mustard, celeriac remoulade.  This was a curious dish.  The duck meat was good.  The fat less so.  My companion and I discussed this issue at length.  We concluded that trying to cook the duck meat slightly pink, the fat had been overlooked as it was rather unpleasantly chewy.  The mustard could have done with more kick too, it was rather too mild and sadly didn’t really add anything to this dish. 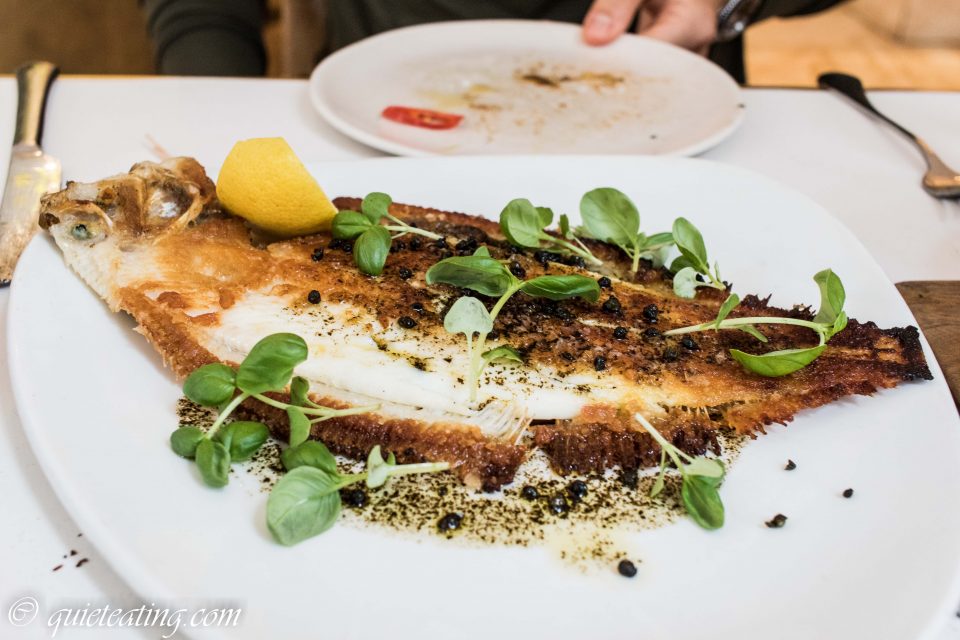 Whole lemon sole, burnt butter, nori, ginger.  We had an issue with the fish as it was not only the butter which was burnt.  The fish had had a bit too much burning itself and was zealously oversalted.  This unfortunate series of events lead to something which was dried out and tasted almost like I was licking a salt block.

It was so bad that I did something my companion was loath to do.  Send it back to the kitchen.  It just was that bad… 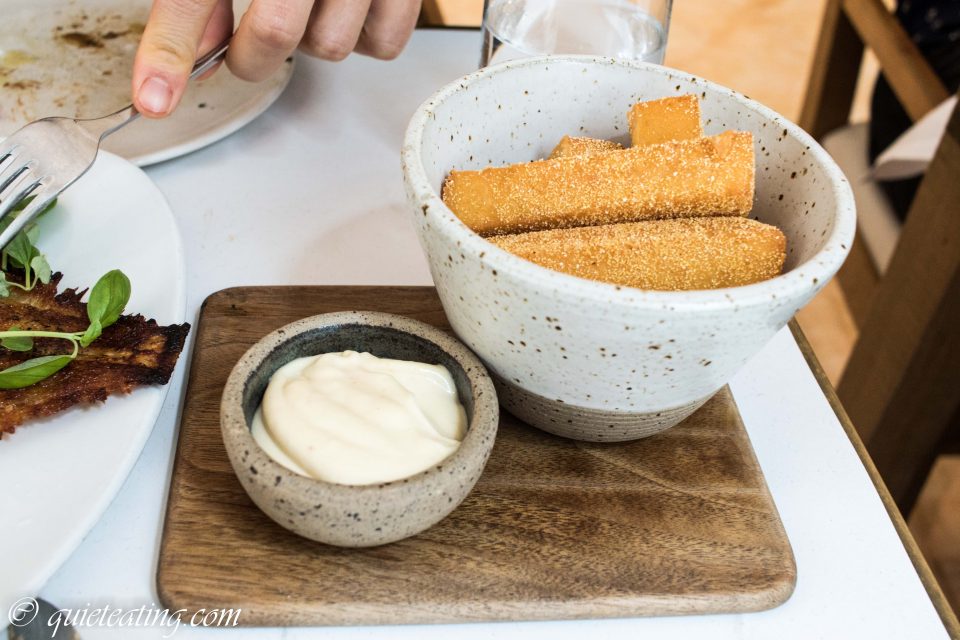 Truffle polenta chips, parmesan, aioli.  Meanwhile, I concentrated on the other dish on the table.  These were rather good and I applaud the vision and skill to mould polenta into long chips.  I tried to draw these chips out for as long as I could while I awaited a return of the fish but there is only so long that you can make four chips last. 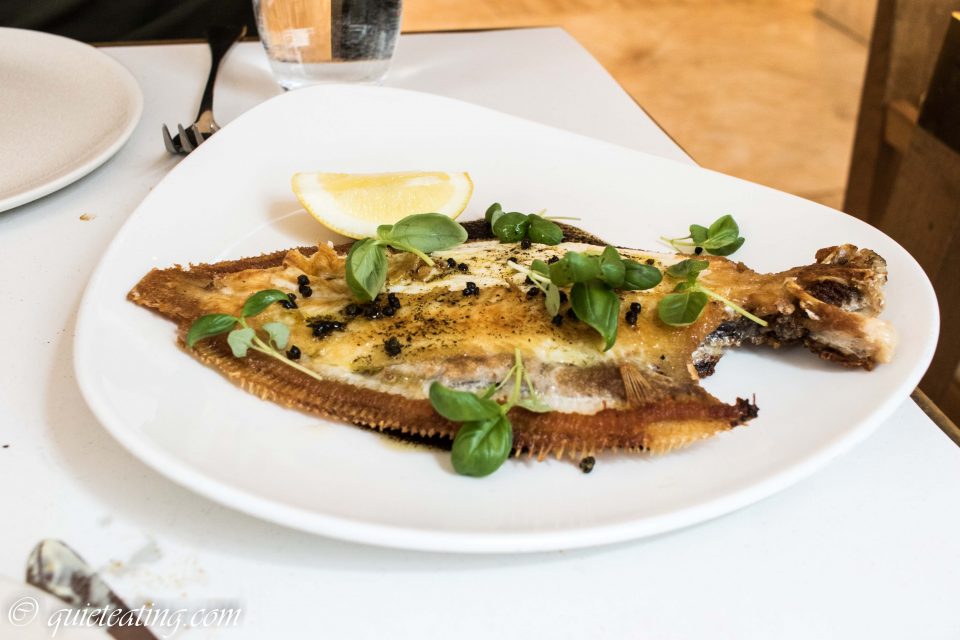 Take 2.  This had a little less carbon and a lot less salt.  Unfortunately, this meant it tasted of absolutely nothing.  Well nothing good.  It tasted rather lackluster and unfortunately it seemed that our patience would not be rewarded.  It was not worth the wait for it to be redone.

Given the degrading quality of the meal as time went by, we decided it would probably not be a wise idea to stick around for dessert.  I wouldn’t want to speculate on what might happen to the ice cream.  However, if there is a positive to take away from this meal, it is that I can now add another arrow to my witty quiver.  So if people ask me where to go for food which is overcooked, overpriced and over here, I would say there is nopo going to Nopi.  That is, no point.