If there is one thing that particularly riles me, it is when people play me for a fool.

I know at times, I kind of deserve it but unprovoked disparaging condescending demeanour is a bit much coming from a waiter.  I may not be the most handsome of specimens but if I am to pay you for the pleasure of sitting at your table, I think I deserve at least a bare minimum of courtesy even if you are having a bad day.  Especially so when I am one of your first customers and your restaurant is fairly empty. 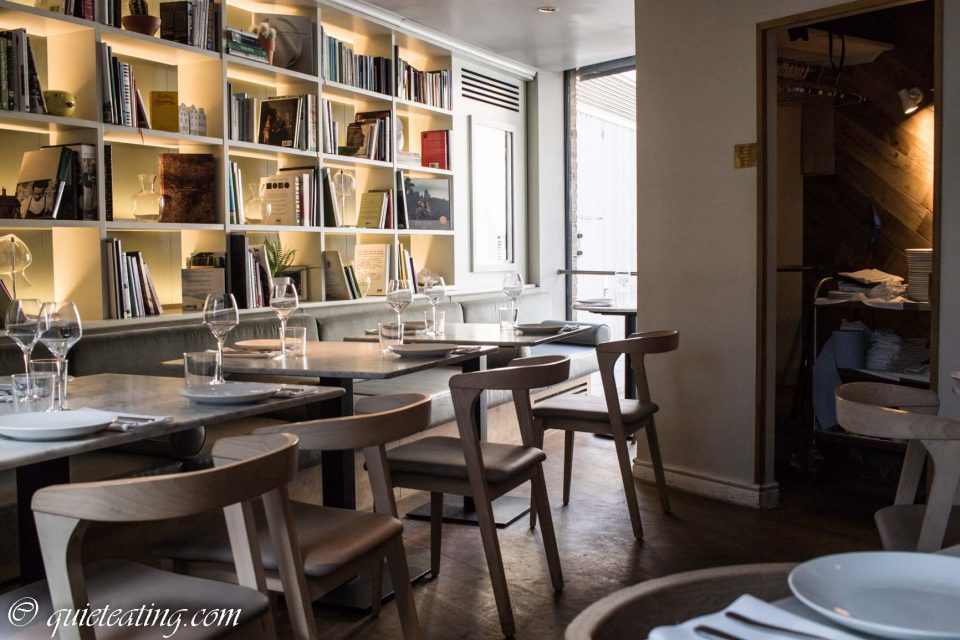 If it is any consolation, at 1pm on a Saturday, this was the view of most of the dining room.  There was one other couple in the entire restaurant.  Perhaps that was a warning of what was to come.  After ordering, it took 25 minutes for the first dish to arrive.  I guess they must have been inundated with serving requests from the ghosts. 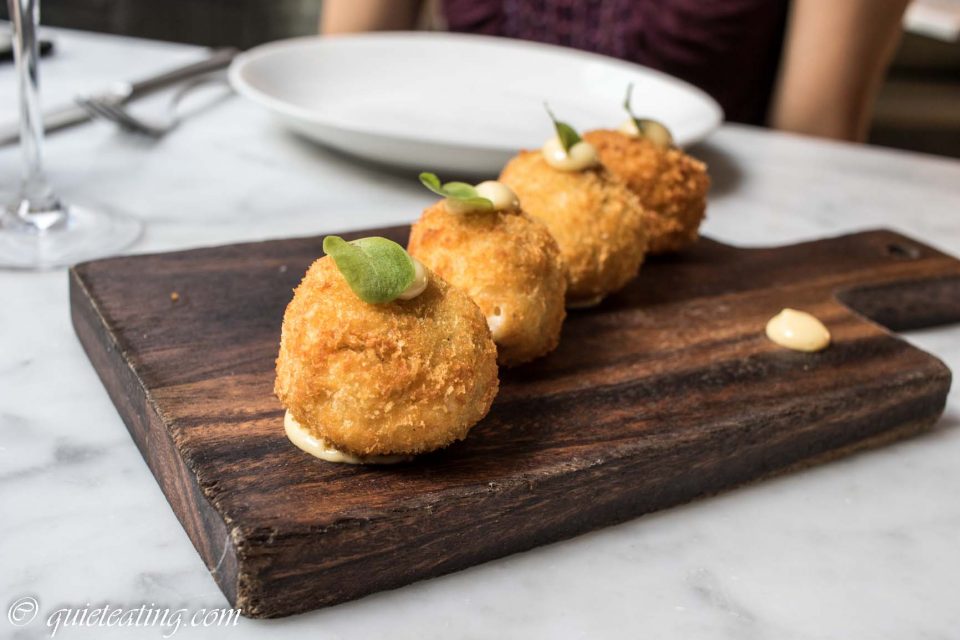 Jamón croquetas.  Rather ordinary, these tasted like they had been plucked out of a freezer bag and then deep fried.  For this privilege, I paid over the odds.  When these were done they almost seemed to mock me as the empty platter sat there for over 10 minutes before the next dish appeared. 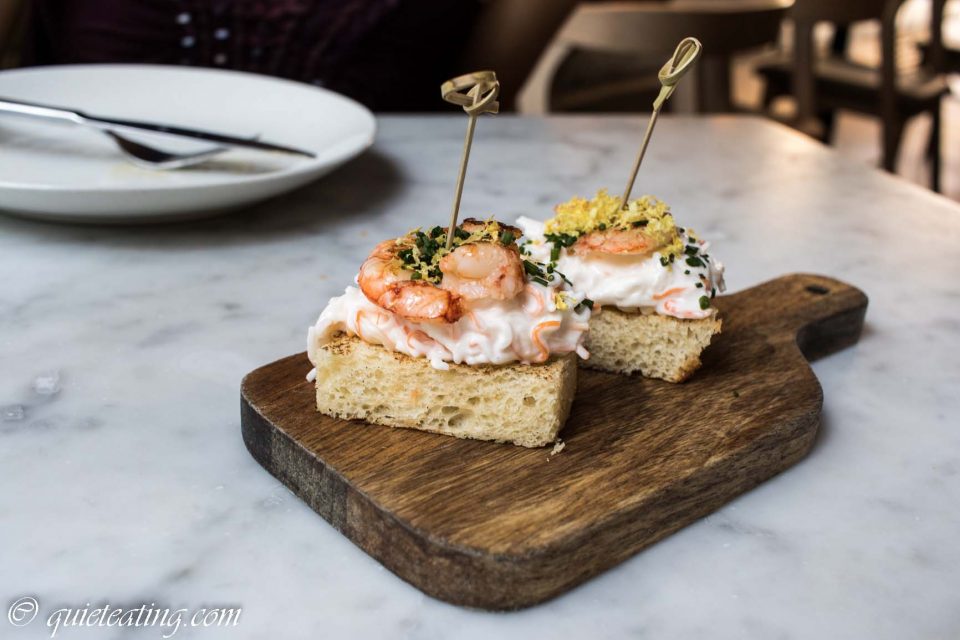 Pintxo donostiarra.  The crab and prawn were sadly overpowered by overzealous application of mayonnaise.  Perhaps they were trying to hide something aside from the measly portion.  It was pretty though.  Kind of like the window dressing put on by some politicians of this day and age. 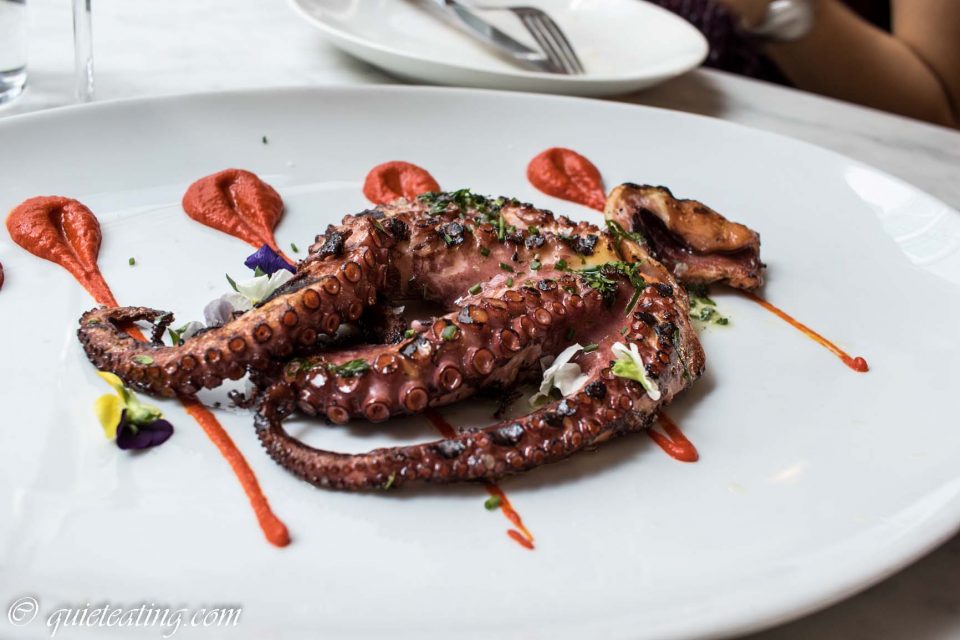 Grilled octopus with piquillo sauce.  I’ve never seen a dejected octopus before.  Now I have.  What was even more impressive was that such melancholy came from a dead one.  Even with the sauce, this was so tasteless, I desperately tried to think of a way to bring some taste to this slab.  After waving at various chefs for 5 minutes (the benefits/dangers of an open plan kitchen) and being ignored, and the waiters studiously avoiding my gaze (only 4 people in the restaurant to worry about too but that’s another issue to explore), I was then forced to plant myself in front of the front of house to ask for some service and salt.  Even with judicious application of salt and pepper, this dish tasted as limp as it looked. 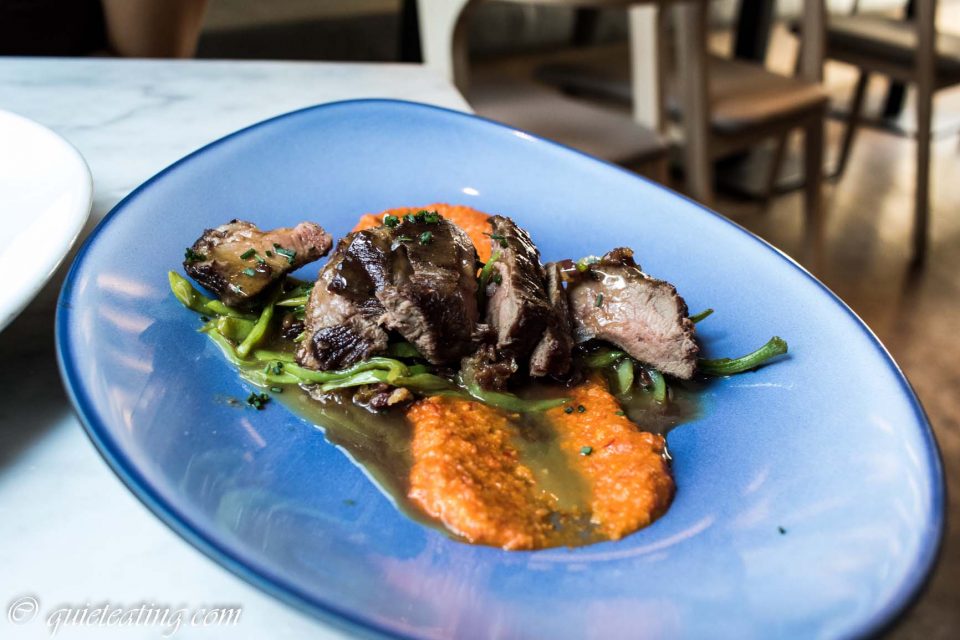 Presa Iberica with green beans, jamon and romesco sauce.  The only dish of the day which was halfway decent.  For a rather hefty price, I was treated to eight pieces of pork which I was assured would be cooked medium rare but came out anything but.  Over-charred others might say.  Given the disappointment of previous dishes, I searched vainly for something good in the dish.  The beans and jamon were good but couldn’t really do much to lift up the romesco sauce which tasted as if it had been manufactured with the same indifference as the service.  Perhaps they made it with a blindfold too.  Which would explain the farcical lack of service, the indifference attention paid to the food and the low headcount in the restaurant.

Yet perhaps I should give them special kudos.  As this is only the second time in the UK I have refused to pay the service charge.  I have even paid when I am subject to bodily harm by a restaurant.  However, my reasoning in this case is that I will not pay for something I did not get.  Now if only national politics worked that way, life would be so much simpler.