I had heard a great deal about Kitchen W8.  Apparently a new up and coming restaurant.  Time to put it to the test.

I went with a friend and we decided to split the set lunch choices so one of us would go for the sea theme courses and the other, the more land based animals. 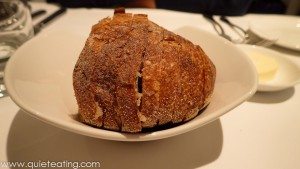 First up, the house bread.  Yes.  It is missing something on the left.  Yes.  I lack self control.  I was hungry.  What’s there to say? 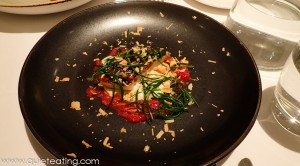 Onwards to the real food.  Mackerel with peanut, seaweed and monks beard.  I have no idea what monks beard is.  I would hope that it might enlighten me to the level of one of those studious monks you see in the movies.  It was ok but not really to my tastes so I reserve my judgment.  Perhaps a more sophisticated palate than mine can provide an informed opinion.  Well, at least that is what I am told when I view art.  Sometimes I wonder if I have some Visigoth blood in me. 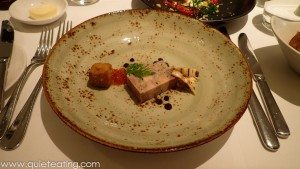 Pig’s head.  Now, I didn’t expect a pig’s head to look like this.  I thought it would look more porky or at least shapely.  Maybe this piggy was road kill… Instead, it seems to be well, rather rectangular.  I haven’t had the privilege of witnessing a pig with a square head yet.  But maybe that’s just me.  However, it did taste very good, packing a quadruple helping of pig in this cubed pate next to a squared collection of the odd parts that did not manage to be reduced into the semi-solid block. 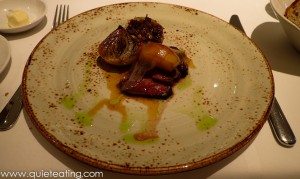 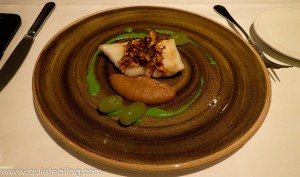 Pollock with buttermilk, artichokes and grapes.  Yes, grapes!  The artichoke was cooked well but I thought that the fish was a bit bland.  Although the buttermilk tried to make up for this.  I did find the drizzling of sauces in artful patterns a bit much.  There is a stage when it becomes a little over the top.  But maybe that’s because I’m a self-professed cultural barbarian. 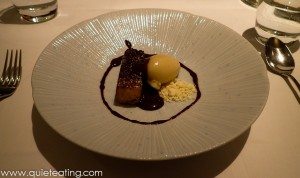 Custard toast with pear sorbet and chocolate soup.  I think I had the most issues with this dish.  It seemed unnecessarily dressed up in flowery language.  You could easily call it a custard tart with ice cream and chocolate sauce….  I think I am a bit out of touch with the restaurant scene, perhaps when I had my eyes closed they decided to charge by the word, much like lawyers.  In any case it was ok but again, nothing special.

Given that this was a Michelin starred restaurant, I felt a bit put out as I did not receive any amuse bouches or petit fours.  Booooo.  Even at Hix (don’t go there, your stomach and wallet will hate you) you get both of these….  Although it was a decent restaurant at a reasonable price, I think there is too much more out there to try to eat for this place to be worth a return visit in this life.