In a change from my usual weekend plans, I had been booked for some bouldering later in the afternoon.  I was not familiar with that particular pasttime but was to soon find out that it involves people climbing, without ropes, on a variety of man made climbing walls.  For safety, the walls are of limited height, so as to prevent rather graceless plummets from becoming lethal falls.  A good thing for me as I would usually eat far too much for lunch.  Makes maintaining balance and wall hugging antics slightly difficult.  As I was tempted to tell my fellow climbers, this is the tough life of an amateur (and often uninvited) food critic.  Wishing to give as accurate a review as possible, I try to often eat as much of the menu as possible, and sometimes too much.  Ahh, the trials I go through in the name of objectivity.

So arriving at Jamavar, with its dark and woody decor in the middle of Mayfair, I steel myself for the show. 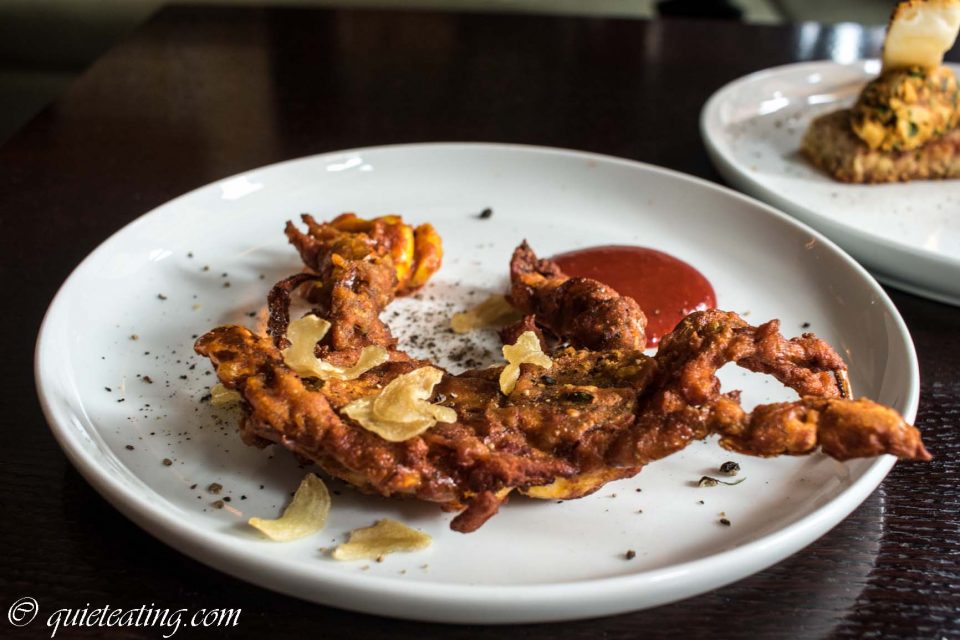 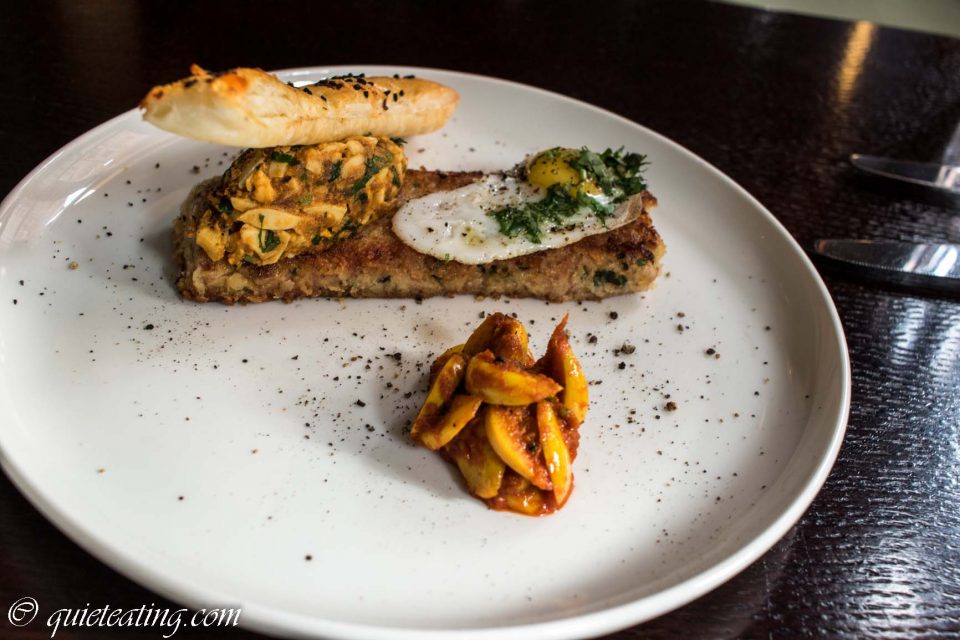 Pan-Seared Achaari Pork with masala puff, quail’s egg & pickled garlic.  Meaty pork set off with boiled and fried egg, this was a cacophony of flavours and textures, smooth, substantial with meaty and clear, greater than the sum of its parts. 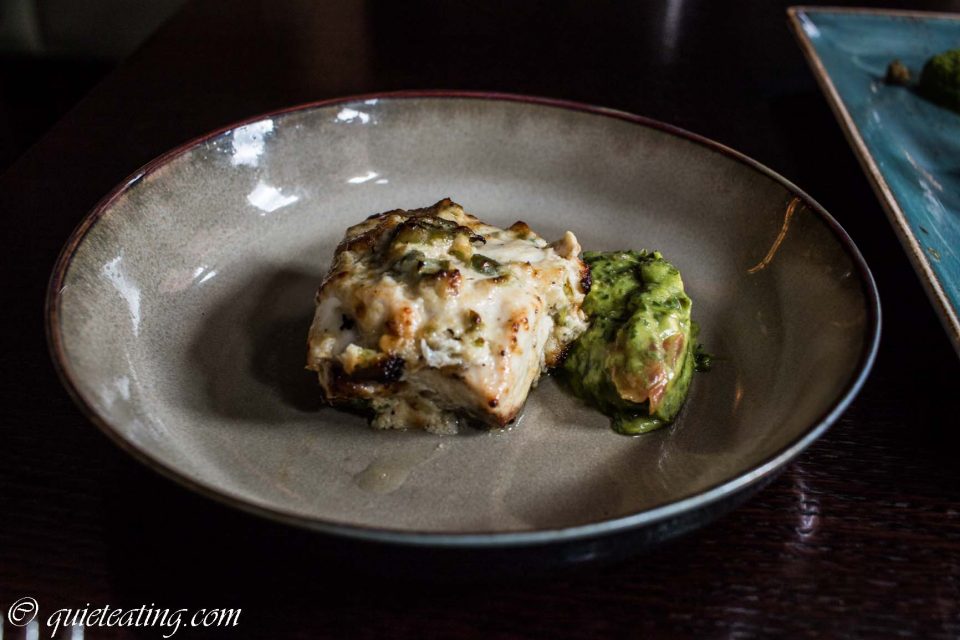 Malai Stone Bass Tikka with mace, green cardamom & avocado chutney.  Inspired with avocado on the side and delicately dressed fish.  Flaky, fulsome in a fishy way and with interesting spices, it was a good catch. 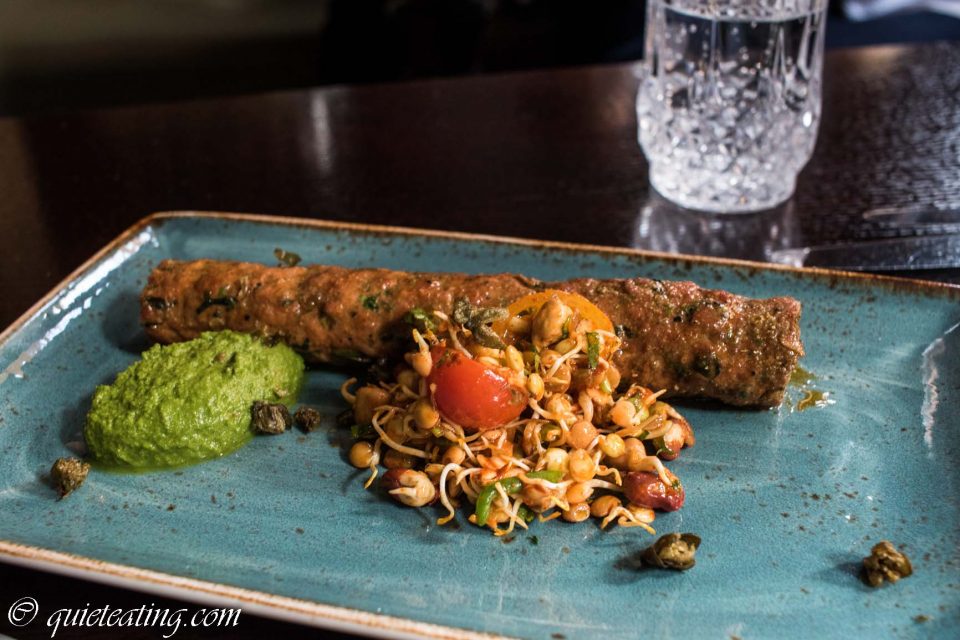 Duck Seekh Kebab, Kashmiri chilli with mixed sprouts chaat, caper’s chutney.  A feast of textures.  Crunchy, soft and creamy all in different parts of this dish.  I was particular enamoured with how they had managed to make a kebab of duck.  I would think a more troublesome task than the usual lamb, as duck is not so easy to carve up. 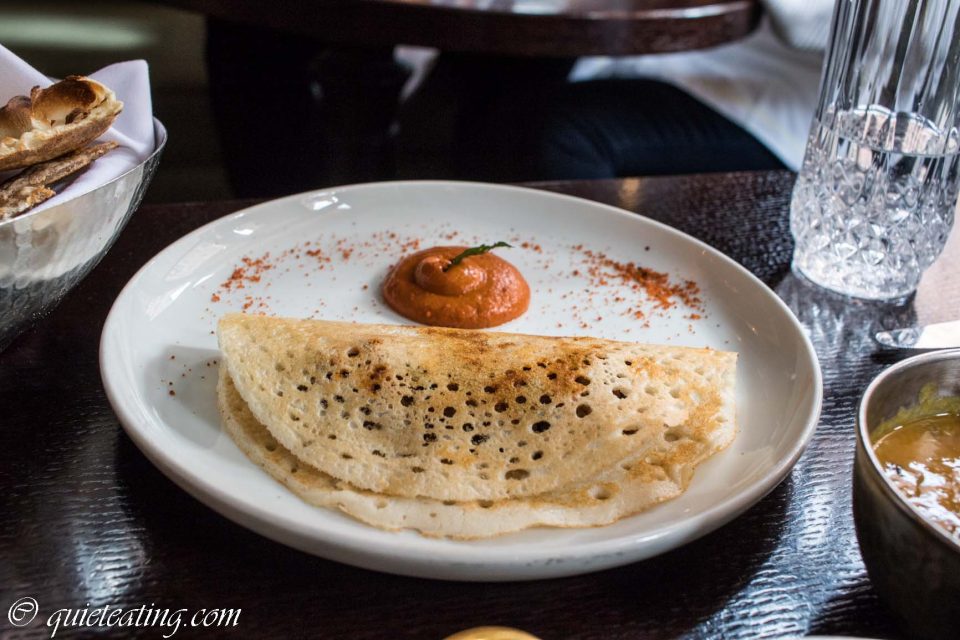 Andhra Beef Uthappam, slow-cooked in mustard & southern spices.  Unfortunately, I didn’t find the beef to be up to the standards of what went before.  Although, as I was recently berated on twitter by a cook, maybe that is just because I don’t know what real Indian food tastes like.  It was a bit too dry for me and lacking in the flair (or perhaps I should say fire) of the other dishes I had tried. 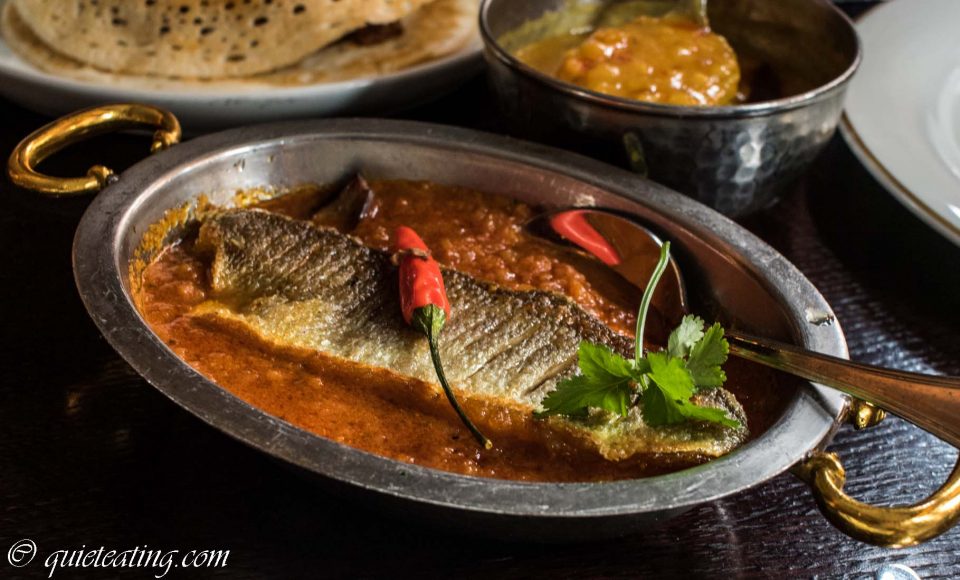 Macher Jhol Bengali fish with chilli, aubergine & potato.  Carefully seared skin, full flavour tomato based sauce.  A carefully judged hint of spice.  Deliciously full of creaminess, and with deep flavour, this was a delight to eat.  So much so that my dining companion proceeded to mop up every single last errant drop of the sauce. 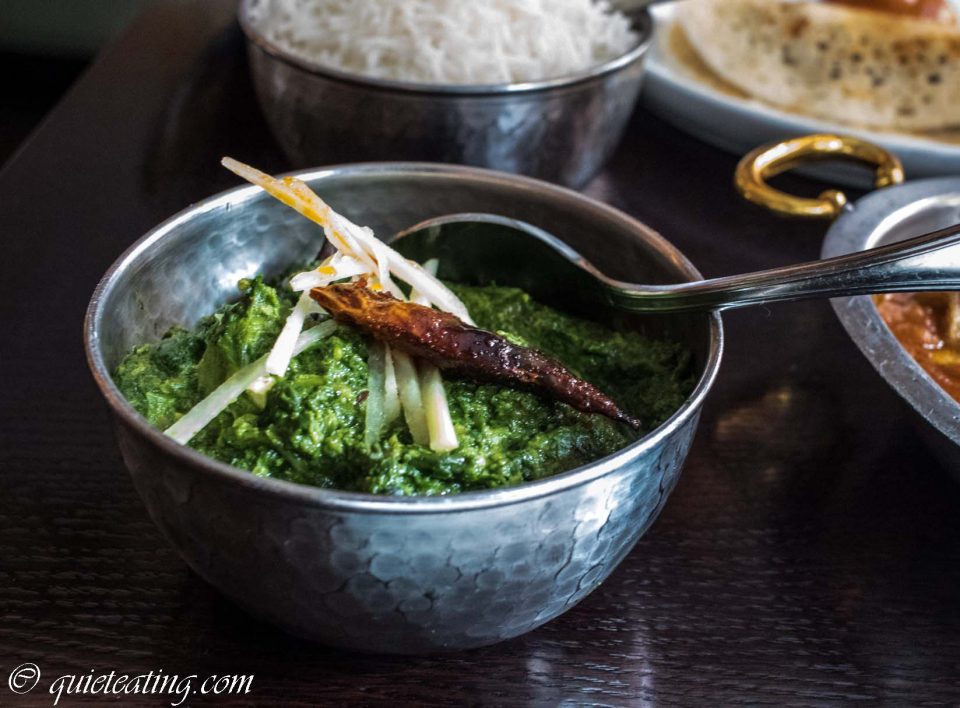 Palak Paneer, spinach and cheese. The spinach was lovely, creamy and delicious.  The paneer was good, a little bland for my tastes though, even though I know it is meant to be that way.  Perhaps not something I will order in the future. 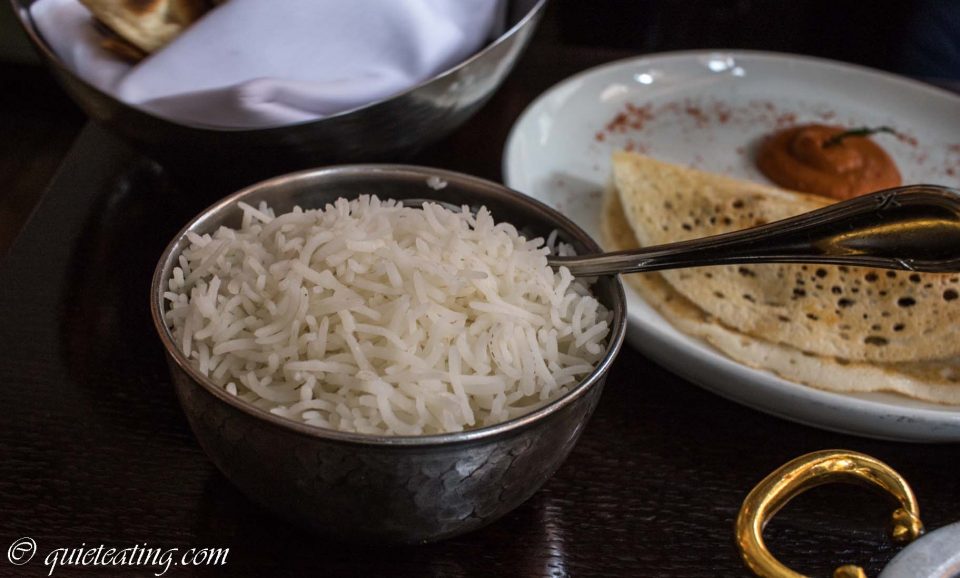 Basmati rice.  Decent but nothing to write home about.  Although it was to prove an interesting comparator to what followed next. 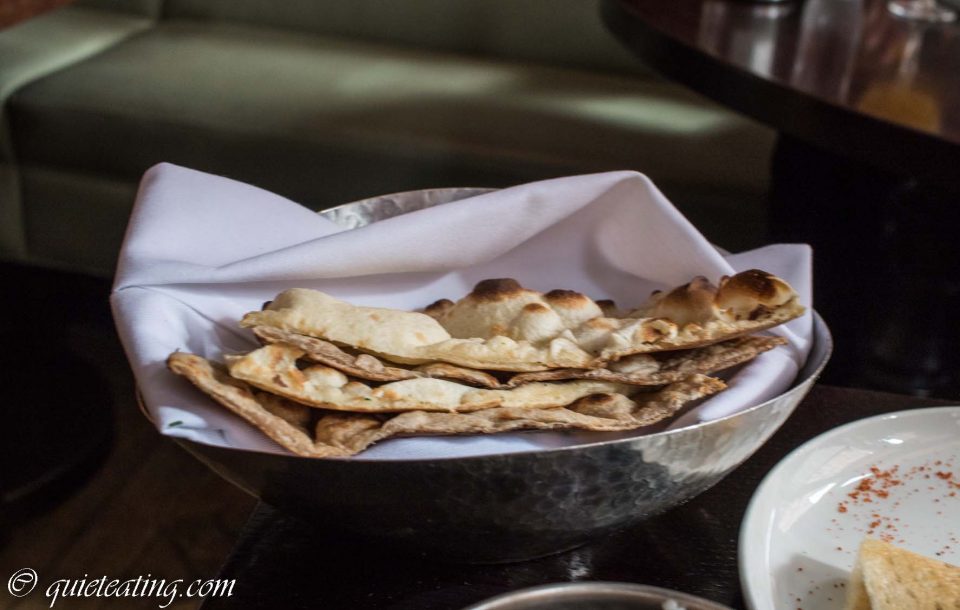 Bread.  This was some of the best naans I have had.  Light but slightly chewy, smooth but slightly charred.  A joy and excellent to mop up any wayward sauce that escaped my spoon. 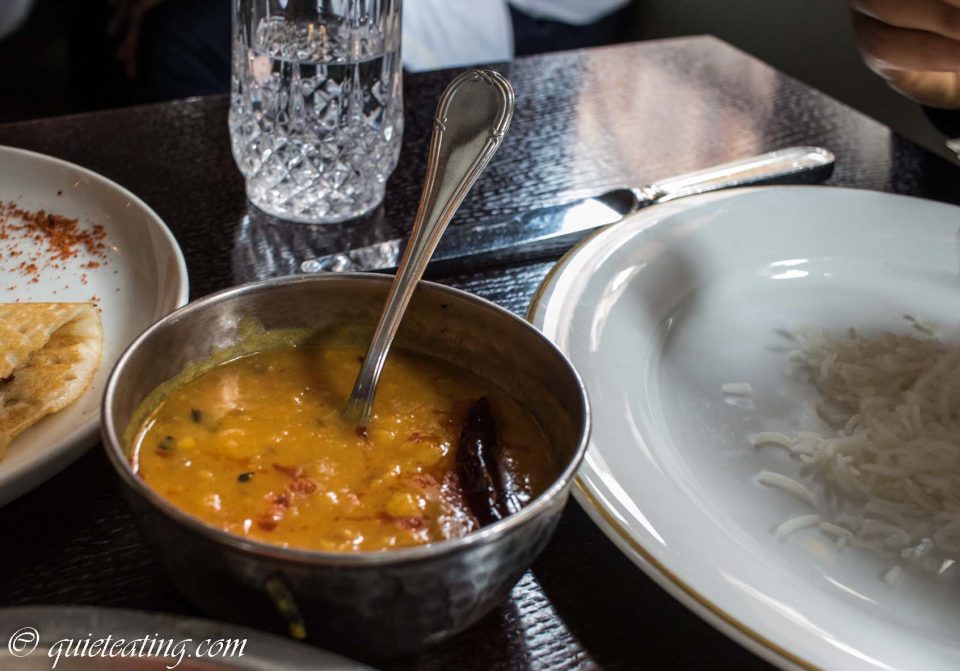 Dhungar Dal.  After having 40 consecutive meals of dal in Nepal, I think I am somewhat qualified to pass judgement on this lentil curry.  It was smooth, with a little kick underscoring the deep flavour of the lentils.  An excellent side. 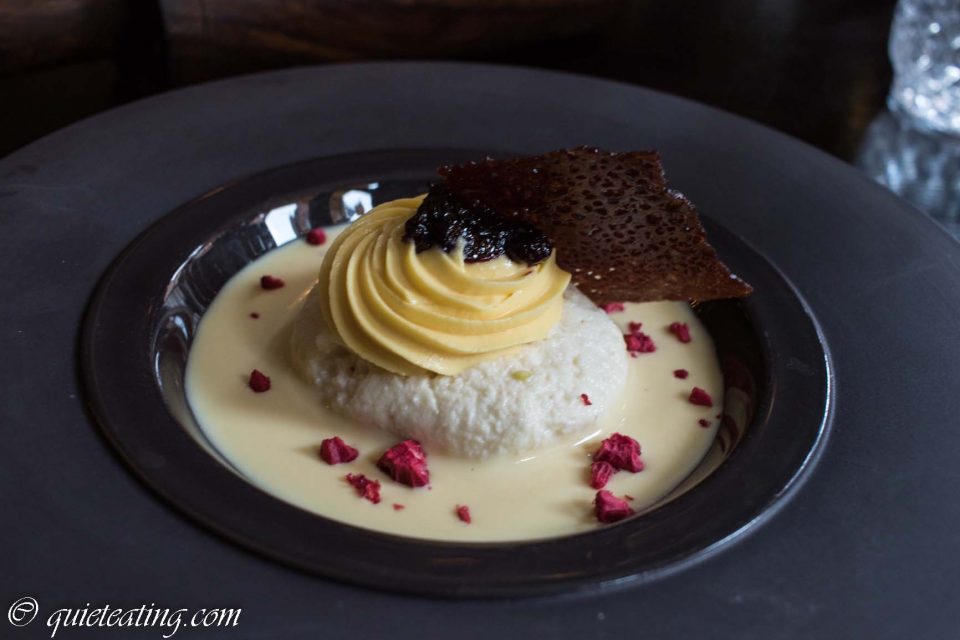 Mango Rasmalai, Alphonso mango pulp, mixed berry chutney, wheat biscuit base.  Again, here I will seek refuge and excuse in my barbarian ways.  This was an interesting dessert but a little too sweet for me.  I’m sure it is very authentic but didn’t really hit the spot for me personally. 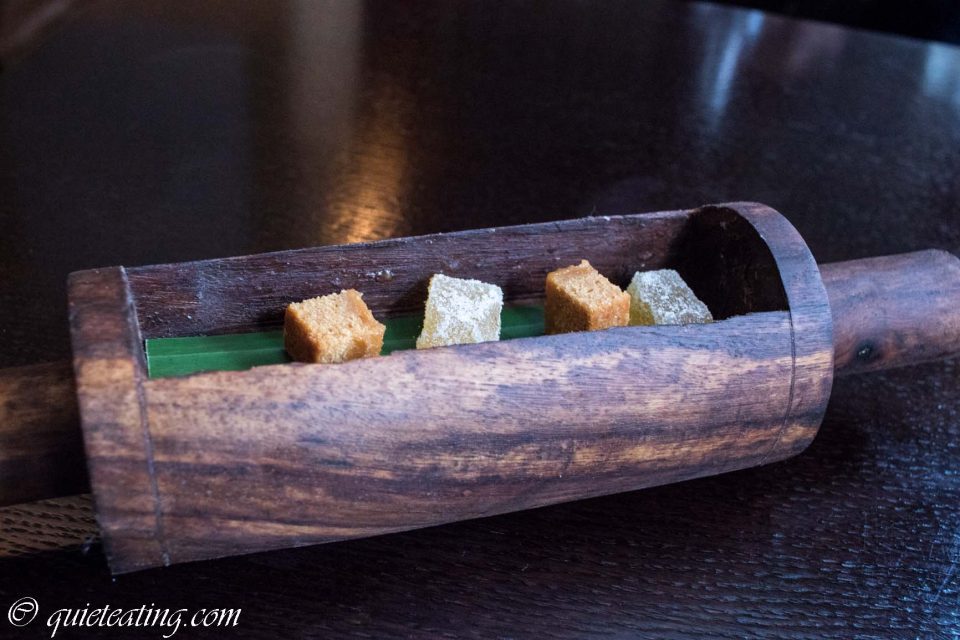 Coconut jelly, cinnamon cake.  Inspired.  Treats I had not been exposed to before, these were inspired with melting and firm, airy and dense contrasting in my mouth to create a delightful finale at the end of the meal.

At the denouement of the meal, I was worried.  Not because of possible trouble later on (you have no doubt heard the saying, it burns when it goes in, it burns when it goes out), the cost of the meal (a fairly reasonable price in Mayfair) but instead encouraged by the standard of the food I ate too much.  Usually, this would not be an issue for me but when I was quickly to follow this up with some rock climbing, I did question whether I might be a bit unbalanced.  Then again, maybe it was worth it.