I am reminded of a particularly disgusting thing that dogs do sometimes.  Perhaps you have been privileged enough to witness this.  If not, let me enlighten you.

If they eat something which isn’t that nice, they throw up.  Feeling better, they then go on their way.  However, if they should pass the same way some time later, they might come across a pleasant surprise.  Perfectly good food which someone had left on the floor for them to enjoy.  Although, if someone else was watching, they would see that the dog was actually eating its own vomit.

Please bear with me as there is somewhere I’m going with this.

In a previous experience which was unfortunately undocumented, I was persuaded to visit the then first outpost of Ippudo in London. I had an exciting time there.  Cajoled into this against my better judgement (I am generally suspicious of ramen joints in London), I thought to go with their standard ramen with extra cha siu.  I was to soon find out that that was not to be the only additional addition.  I can only speculate as to why there was string in my food but perhaps the cooks thought that that might add to the flavour by giving the ramen body.  In fact, I have heard that boiling string can sometimes bring out additional nutrients, much as how starving soldiers would sometimes boil their boots in desperation.

Now if you do something bad to your customer the first time round, I would think it would be fairly obvious that a repetition would not go down well.  Apparently, I was mistaken as even more string was found in the replacement.  Although I had restrained myself in the first instance, twice was a bit much; so rather incensed at this, I then requested the attendance of the manager. He appeared with a sheepish look on his face and asked if I would be interested in some dessert.  In hindsight, perhaps this was a mean thing to say but I replied, only if it doesn’t have string in it.  I left this episode with a bad taste (and some shredded string) in my mouth.

That was over 2 years ago, so I thought that they might have fixed this problem by now. 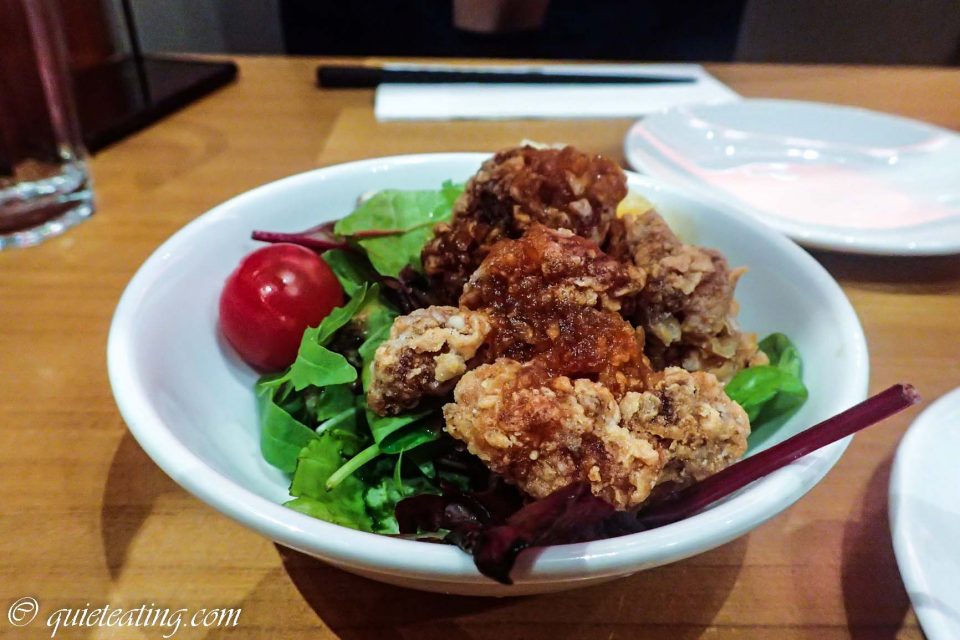 Karage, Ippudo fried chicken with grated daikon radish and tart citrusy ponzu sauce.  I didn’t know that Ippudo had branded fried chicken.  If they did, I couldn’t see its defining feature as this just tasted like a rather meagre portion of small fried chicken pieces on a smattering of leaves with a cherry tomato thrown in.  It wasn’t bad but wasn’t special.  Although, perhaps I should give it five stars as there wasn’t anything extra here. 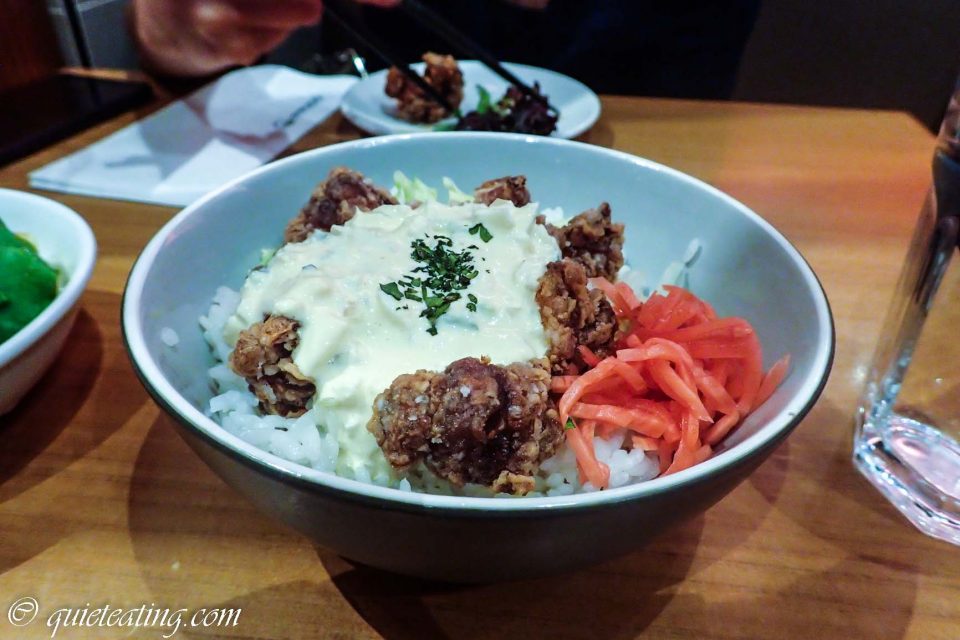 Chicken nanban, rice topped with deep fried chicken, sweet and sour nanban sauce and home made tartar sauce.  I see they dropped the Ippudo branding from the fried chicken here, even if it did taste like it had come right of the same fryer.  This was not chicken nanban.  During my 2 years in Tokyo, I came to love and attain a great understanding of what chicken nanban really is.  This was deep fried chicken with tartar sauce splashed on top.  The chicken was soggy, in that way that over-fried food seems to be, the tartar sauce was sad with some pieces of diced hard boiled egg inside.  The rice left much to be desired and the shredded carrot tasted as uninspiring as it looks.  I thought not to despair as this was a ramen joint, surely the noodles would be good. 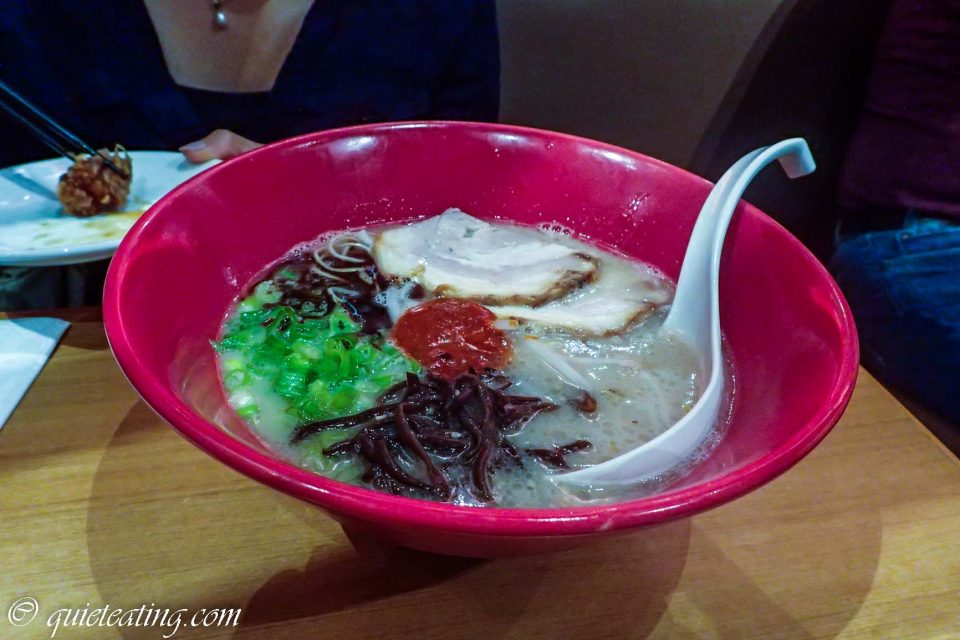 Akamaru modern, miso base with Ippudo’s special sauce and fragrant garlic sauce.  Served with thin noodles, pork belly chashu, sesame kikurage mushrooms, bean sprouts and spring onions.  Then again, perhaps all the disappointments that came before were merely to lift up the main event.  The ramen.  In the description, it also describes itself as a refined, modern style of ramen.  Although I would usually find language suggesting that places have re-invented the wheel funny, sometimes it just comes along a bit sad when it is so far off the mark.  I cannot say this was bad, I can say it wasn’t good either and perhaps that is being more generous than it deserves.

Yet I guess I have something to be grateful for.  It wasn’t as strenuous a meal as the last time I came as chewing string needs formidable jaw power.  In an additional plus, they didn’t add anything extra to my food and so I had a fairly boring non-exciting meal.  Yet, perhaps they could have added a little bit of finesse to things as although the food looked good, in taste it was anything but.