I seem to have achieved a variety of different reputations among my friends regarding my culinary preferences.  The most prominent being the fussy eater, the sarcastic one and Mr Mayfair.  Addressing that last point, it seems to grow out of the impression that I love to review almost exclusively white tablecloth establishments.  Nothing could be further from the truth.  I actually just follow my nose (or tongue) in search of quiet eating.  My scoring is regardless of the grottiness of the eatery.  What I do prefer though is a place where I can usually hear myself think.  Just that Mayfair tends to have a disproportionate number of such.

Yet it is my newest nickname that perplexes me most.  Mr Exciting.  This grows out of the many misfortunes that seem to befall me when I dine.  There was the fly in my soup (I kid you not) when I was accused by the serving staff of putting it there on purpose.  After such an accusation, I admit that I felt like transferring the insect in question to a far more easily visible location on said waiter’s jacket.  Then there was the incident of string in my food, not once but twice.  When offered a dessert on the house as an apology, I snidely asked if this would have string in it too.  In another scenario, I was treated to the cooking of my own hand in a restaurant by liberal application of boiling water.  Sorry mate, the kitchen is over there, not in my lap.

Surviving all these mishaps, I have now completed my 100th review with sharp tongue intact.  I wondered what surprises I would experience today at Foxlow.  It would only be fitting if some suitable calamity befell me or the kitchen on this momentous day.

It was actually brought to my attention before I even sat down that their kitchen was broken.

Seems like I really am cursed with exciting times.  Ok, time for the door then.

Actually, it was only the equipment that dealt with seafood.  Don’t ask me what the technicalities were but the result was explained to me in great detail as my eyes slowly glazed over.  An interesting lecture on the finer points of grilling a fish.  After this sermon, I queried whether the same prohibition applied to the meats.  Thankfully no.  So all is ok then.  It’s a steak place after all.  Have to order the meats then.  No great loss. 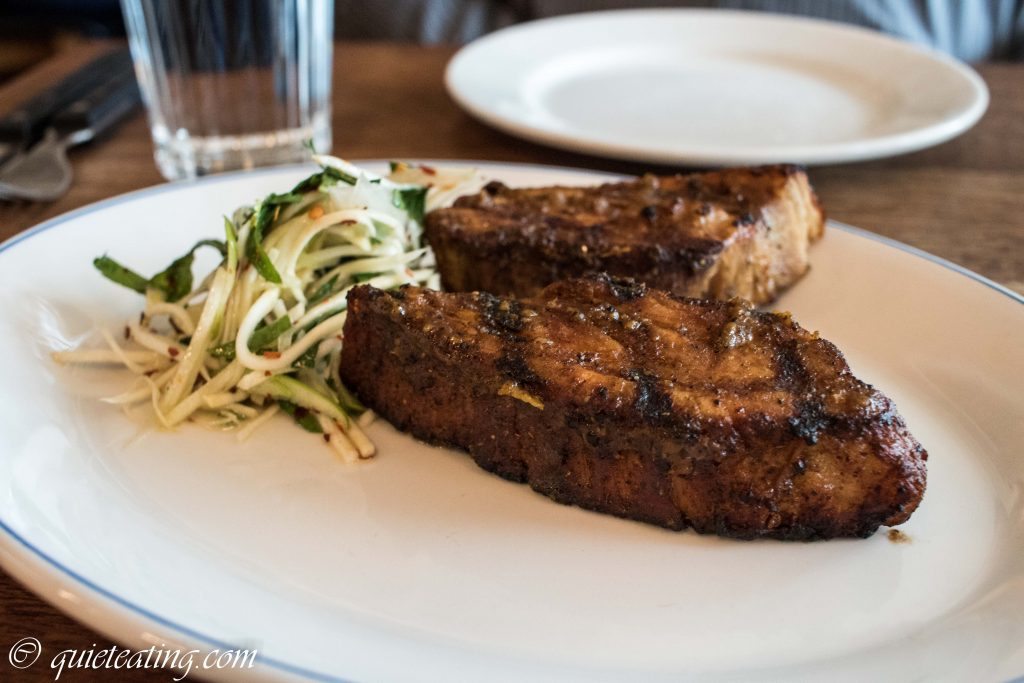 Slow cooked Tamworth Spare Rib.  Spared this potential cataclysm, we decided to go for spare ribs.  These were excellent with a delicious flavour from the deep rub.  With intense flavour and moist insides, these were to be savoured. 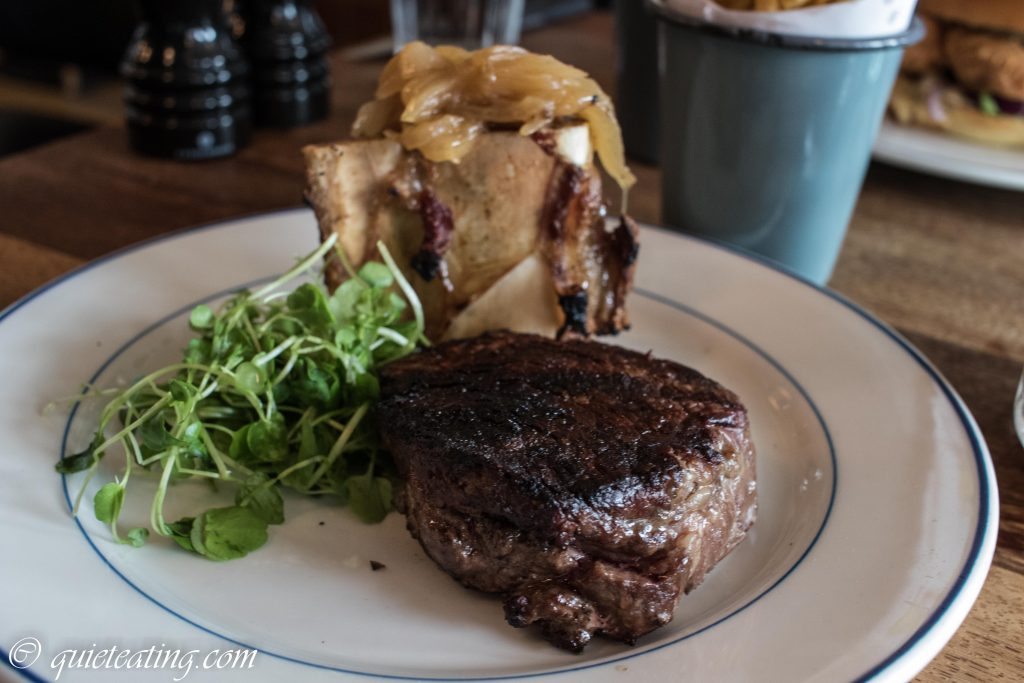 Fillet aged 35 days with bone marrow.  This dish was the main reason why I ventured to this little known corner of the city on a weekend.  My friend had waxed lyrical about their meats.  I was excited about this dish before it appeared.  I was excited in a different way after I tasted it.  Sadly, on account of its rather bland nature.  The steak was disappointingly lacking in flavour, almost as if the troubles in the seafood section had slowly leached over to the meat.  The Bearnaise sauce that accompanied tried to lift it up, although it sadly failed in this task.  My displeasure with this cut may have been due to my personal preferences. I prefer meats that are cut closer to the bone, more intense flavour there.  Much like my words some time. 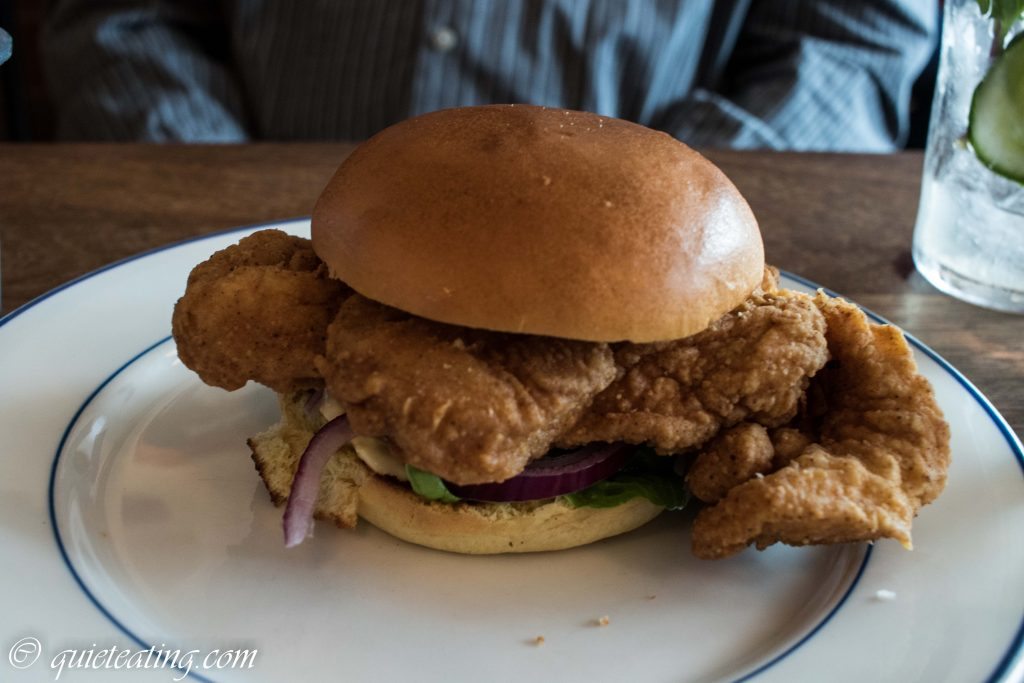 Fried herb-fed chicken sandwich.  As one of my friends likes to say continuously, it’s fried chicken, what could be wrong with it?  Au contraire, fried chickens I have known have been sadly butchered not doing justice to their sacrifice.  Thankfully this was not to be one of those occasions.  This was actually one of the best chicken burgers I’ve had.  The chicken was moist and encased in some secret herb assortment.  If the herb rub was available on the table, it might make the napkin seem edible.  It was really that good. 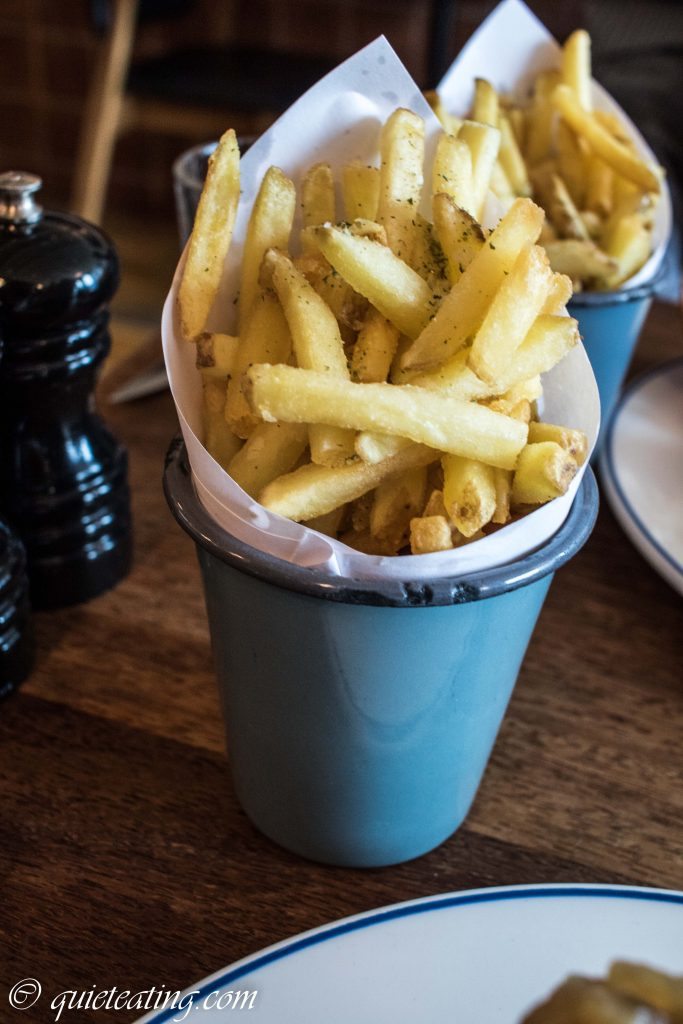 Fries with herb salt.  These were a delight with the same herb rub as the chicken.  Excellent.  An exciting way to end the meal.

The word “exciting” can mean so many many things.  Exciting as in unexpectedly sublime, exciting as in inducing a rictus of terror, exciting as in experiencing some novel procedure of food delivery to your plate.  There is also excitement in the sarcastic sense in writing, being excitingly dull.  Although in this case, the word excitement may be best used as it is in everyday tabloids.  Foxlow had its high points but rather unfortunately disappointed on their signature steak.  How very “exciting” a day.  I did expect that on my 100th review I would be in for a more “interesting” time but let’s not get started with that word.