So, Kobe beef has now landed in London with a few restaurants serving this ‘caviar of cattle’. This is supposed to be the genuine article as opposed to wagyu beef, which doesn’t necessarily come from Japan, and may not even be purebred. There seems to be much confusion over Japanese beef.  Kobe beef is just that, beef which comes from Kobe.  Although the most recognisable of Japanese beef brands, if you stop by Japan, you will find it in the minority with other regions taking precedence.  Although in London, we decided on Engawa which claims to import a whole Kobe cow – so, better to serve various cuts of meat – something which apparently competition struggles with.

Engawa is set in the luxury Ham Yard Hotel development near Piccadilly and is a pretty small restaurant with the open kitchen/bar taking up a good amount of the space. We visited when the room was fairly quiet on a Sunday lunchtime 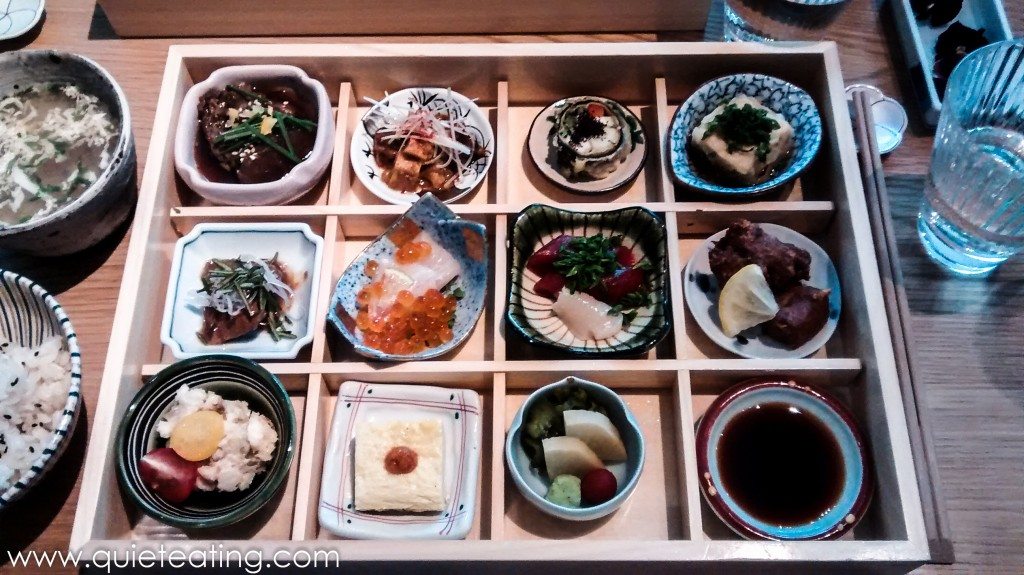 The lunch time menu served bento boxes (GBP30 for 11 pieces and GBP40 for 14), with 3, 5 and 8 course tasting menus at dinner. We decided on the 11 piece box which came with a variety of visually attractive small dishes including the much touted Kobe beef and various raw dishes.

When we went, the beef was cooked in 3 different ways (sadly, no beef sashimi) – and tasted quite good, although if not told, I’m not sure we would’ve have guessed it was Kobe beef… It just lacked that little bit of wow factor.  The rest of the dishes were all well done – the sushi and sashimi was fresh and tasty; the cooked dishes done just right.

Despite the dainty nature of the dishes, the meal was filling with the accompanying rice and soup, and at £30 for the 11 piece box, good value for money.

Overall, the arrival of real Kobe beef with Engawa is to be applauded. Even if the beef doesn’t make you think of selling your mother to try it, at lunch prices lunch were reasonable. Although it was not a stretch of the imagination to see how the bill could run of control like an enraged bull at dinner time. At the very least, we would be keen to return, not least to try the Kobe sashimi on offer.

GBP30 for the 11 piece bento box at lunch, not including service and drinks.