This was the first day that restaurants reopened in London.  I felt that Christmas had come round early. I was ecstatic.  Given that it was a weekday night, I didn’t have time to travel so this was something from the local neighbourhood.  Lucky for me, just around the corner was a place I had been to a few years ago and thought was more than passable.

Recently, I have also come across a dry spell in my writing.  It is difficult to put pen to paper to come up with something witty for this blog.  Thankfully this is no problem for my work where I am paid to write.  That doesn’t really require that much creativity as it is rather dry.  However, given that in my leisure writing here, there is no compulsion to read what I write, I owe it to you to write something worth reading.

So I really was lucky here, as less than perfect experiences are easier to write about – the worse the experience in the moment, the more fun to write (and read) about later on.  It helps to offset the discomfort of the moment. 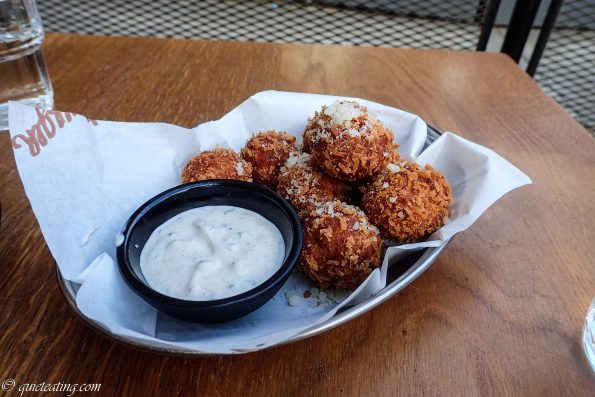 Lobster balls.  Moist and juicy inside, these were rather enjoyable.  As they should as each ball was little dear at £1 each.

Lobster, salad and fries.  Commenting on the various elements.  The salad was small, seasoned passably but otherwise a bit boring and lacking in imagination.  It just tasted like some salad leaves dressed with a token splash of sauce and then dressed with some raw onions.

The chips started off well but then after a few bites, I thought that they reminded me of other things I had.   They had that slightly stale taste from being cooked in not very clean oil.  I just hope that that oil was not left over from the last time they were open in Dec 2020 as otherwise I might get to look forward to some excitement on my throne at home.

Finally moving to the red red lobster.  It looked bright and happy and I spent some time admiring the smooth and shiny shell.  Moving onwards to the more important piece, as for the meat, it was (a) a bit rubbery; (b) a bit bland (although saved by the sauce) and (c) rather sparse.  I think it was after 5 or 6 bites that it was all gone…

It was nice to be out again but perhaps not as such a dear price.  As my first sit down meal since restaurants reopened, it was a nice experience to be served food again (even if it was a bit cold to sit outside).  That offsets being  scalped a bit by the price.  Seems that they have also taken away the free fries and salad refills now in a push to scrape as much as they can off you.

Yet looking at the bright side, I was lucky!  When inspiration tends to dry up and the words seemed locked away in a faraway tower which I cannot grasp, an easy way to take baby steps to opening an verbose tumble of my words is simply, a not so good meal.  So on that point, Burger and Lobster delivered.

Dinner (a lobster and a starter) was GBP38 excluding service and drinks.