Location is everything.  Well, at least in real estate.  The same could be said for restaurant locale.  If the outside footfall is rather timid, it might be a bit hard to entice people in the door.  Exceptions being, of course, the Fat Duck and the Waterside Inn.  Why else would one travel to Bray if not to sample these culinary delights?  Or perhaps I am just talking about myself as I live to eat, not eat to live.  Gives me something to look forward to at the end of a hard day.

Bella Cosa bills itself as being “in the heart of Canary Wharf”.  A slightly cliched statement as real estate statements aside, a 15 minute walk from the station and tucked away from the main road is possibly not the best way to get noticed.  In any case, they have a spacious and nicely laid out dining room.  No chance of being overheard, especially as there was only one other group partaking in sustenance here.  I say that instead of eating as eating has connotations of enjoyment rather than the need to digest nutrients. 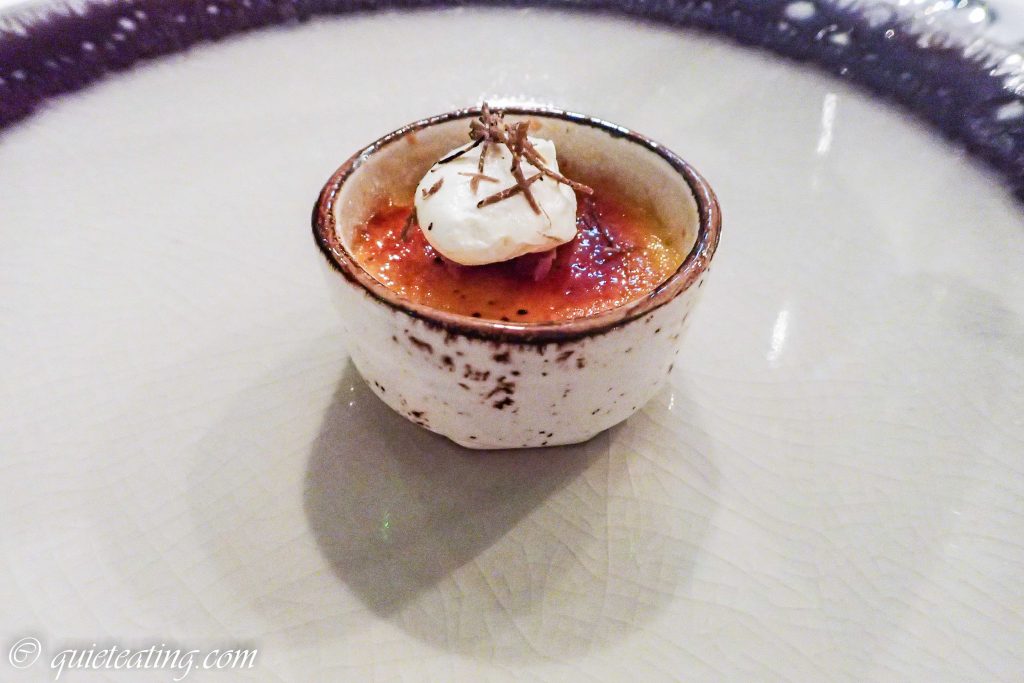 Sweet potato creme brulee.  Surprisingly, our meal came with an amuse bouche.  Although, maybe this should have been a warning of things to come.  This was a bit of a strange concoction.  Not bad, but just different. 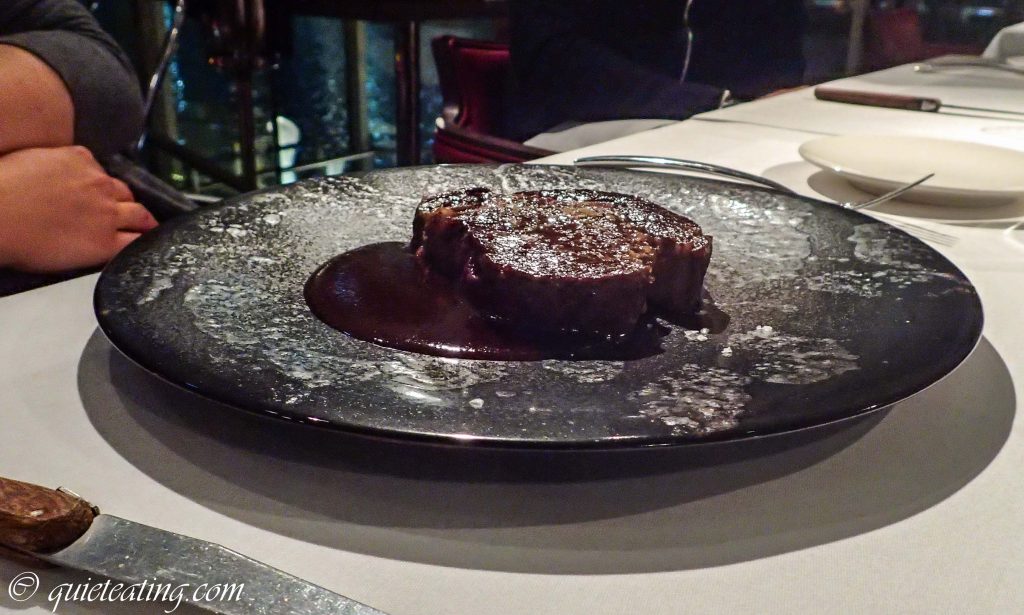 Bistecca di Manzo Pezzata Rossa DOP, Salsa al Pepe Nero: Grilled Pezzata Rossa Beef Rib Eye 300g, Black Pepper Veal Jus.  Great presentation, rather less great taste.  This specimen was to be cooked medium.  Inside, it was prepared rather more on the rare side.  With its raw nature, its lack of taste should not have been a surprise. We left it unfinished, it was just too exciting for us. 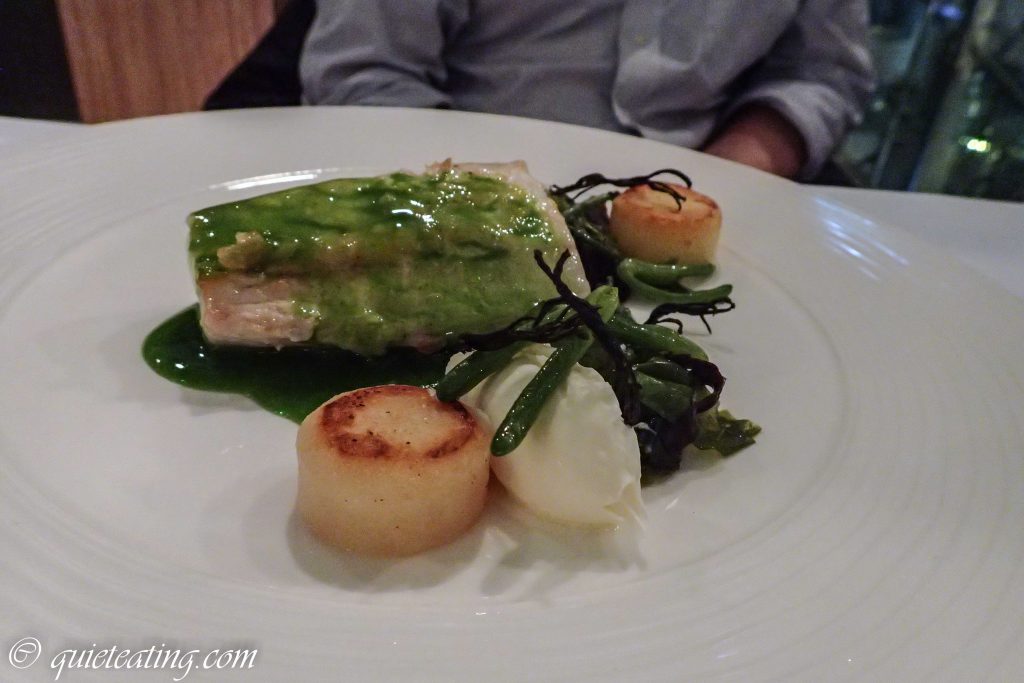 Herb Roasted King Fish, Mascarpone Cheese, Seaweed, Potato Confit, Salsa Verde, Filetto di Ricciola al Forno, Mascarpone, Alghe Miste, Confit di Patate, Salsa Verde.   This was probably the stand out dish of the night.  Stand out because it was actually something you wouldn’t necessarily immediately want to chuck into the bin, high price aside.  The amount of monetary pain was to be a theme of the whole meal.  If you are paying through your nose for something, you might feel more motivation to stick it out.  This dish was executed as I would have expected in any normal restaurant.  Just not at a restaurant with stratospheric prices for its location described in such hyperbolic language. 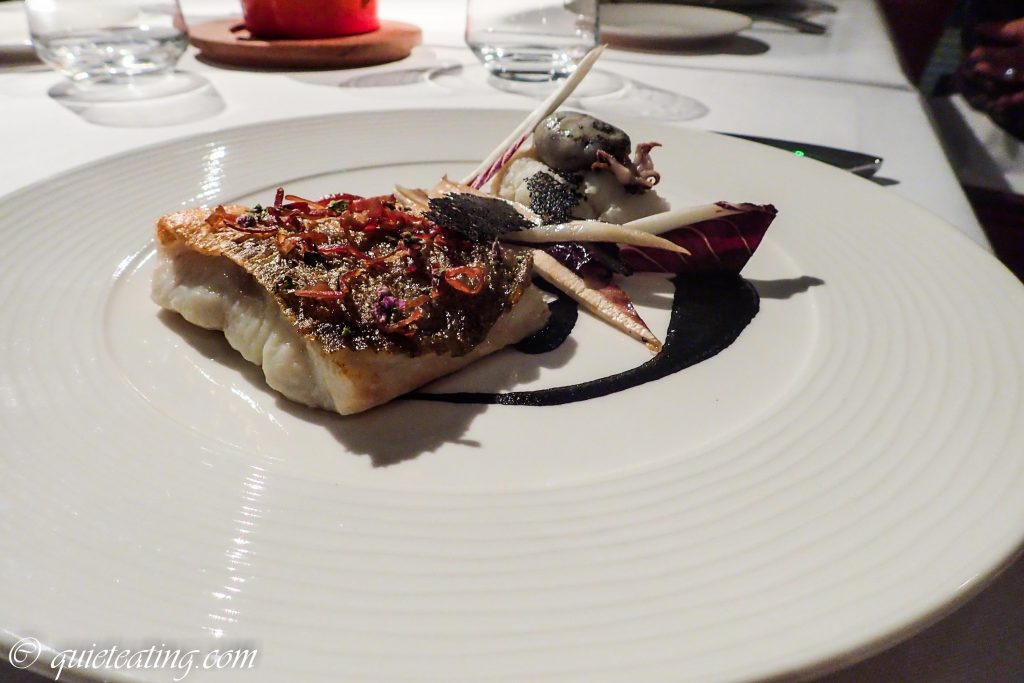 Filetto di Merluzzo in Padella , Calamaretti Ripieni, Polenta , Nero di Seppia, Prosciutto Croccante: Pan Fried Cod, White Polenta, Stuffed Baby Squid, Squid Ink Sauce, Parma Ham Crisp.  Fancy name for a fancy dish.  If it was done right.  Which it wasn’t.  The polenta was rather dry and tasteless, the squid was tasteless and the cod was, who could have guessed, exquisitely bland.  It was done so well, I was amazed at how they had managed to leech the good elements out of a harmless fish like cod.  A dish lacking in excitement.  Still, the best was yet to come. 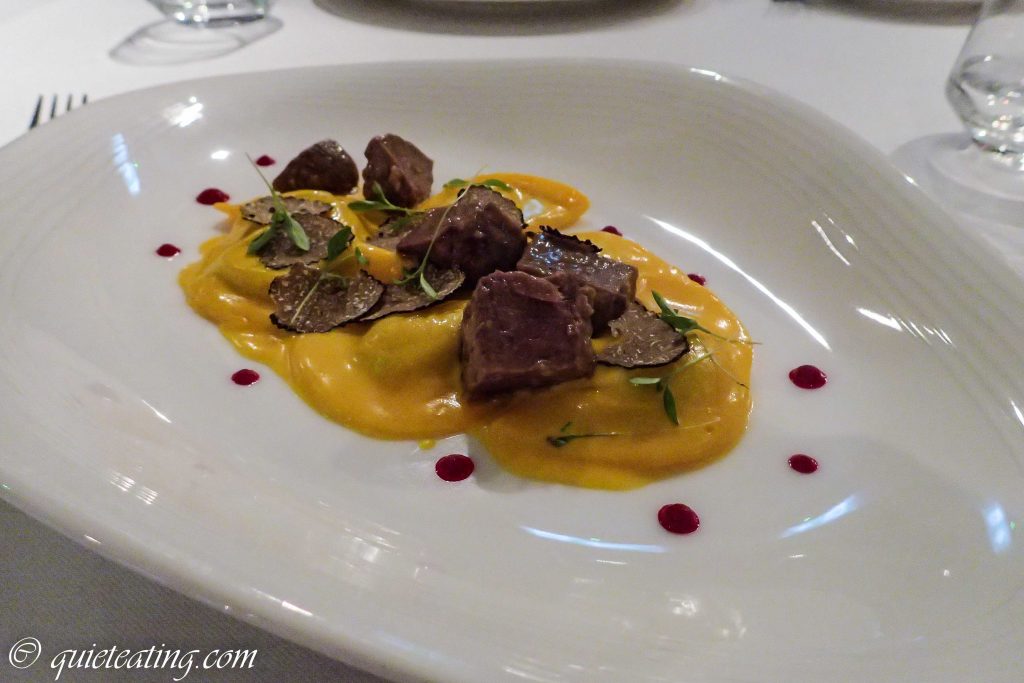 Agnolotti di Coda di Bue alla Vaccinara, Sedano Rapa, Pecorino Romano, Scalogno sott’Aceto: ‘Agnolotti’ Cacao Pasta Ravioli stuffed with Oxtail, Celeriac, Pecorino Romano, Pickled Shallot.  A dog’s dinner if anything.  The roughly hewed ox tail was placed on six pasta parcels. This was the main course size too, I shudder to think of what the starter portion consists of.  Maybe it is one raviolo?  The oxtail had a lack of any inspiration or taste, the truffle tasted of nothing and the ravioli made up for this lack of spice, being oversalted.  Even though a canine might happily eat this, they would still go away hungry.  Even if they were one of those minute chihuahuas. 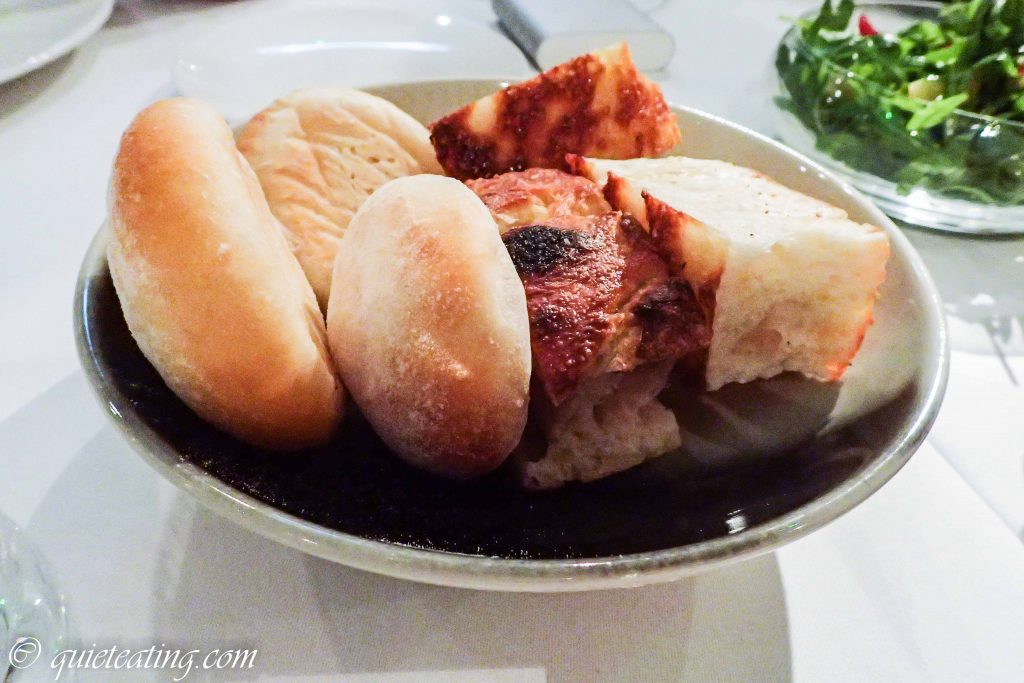 The bread was actually quite good. Focaccia and white rolls.  The only problem was that it arrived after we (or at least I in my famished hunger) finished our main courses.  Interesting modus operandi.  I guess they are just aiming to encourage you to order more from the menu to not leave hungry.  I’m proud to say that my willpower was stronger than my stomach.  I thought to beat a hasty retreat at this point, leaving behind only half my wallet.

At these very full prices, we expected something a bit more.  Maybe it is due to an unwillingness on our behalf to splash out and spend GBP70+ on dinner per person in the backwater of the Isle of Dogs but we left feeling a bit shortchanged, unhappy and less than full at the end.  Although the surroundings were superb, light and airy with crisp white linen tablecloths, the pricing seemed to be grasping above its station.  It’s a dog eat dog world in the restaurant trade.  Maybe that’s why sometimes you have to make compromises.  Like, maybe the food, location or portion size.  But never the service or ambiance of course.