That’s something that a lot of people accuse me of not having. I admit that I am one to enjoy fastidiously planning much of my day and seem to always have a plan in mind.  My rationale is that it makes life more efficient.  Although when I am with one particular person, if I voice such thoughts, they are not always received well.  In such situations, I console myself by telling myself its a free world and people have a right to a different perspectives.  Especially bombastic, imbecilic, moronic individuals… 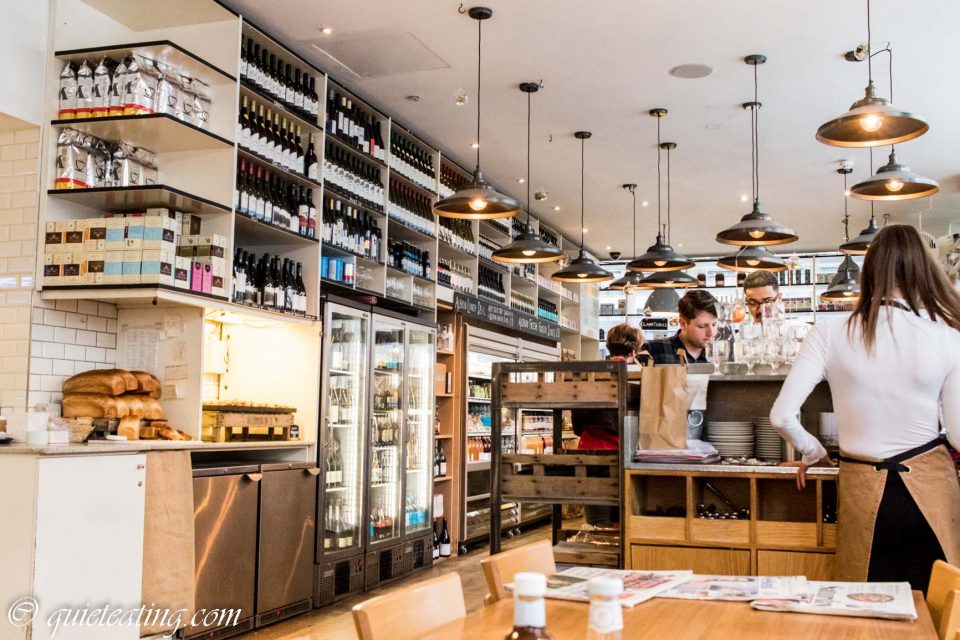 Yet in other times I try to show a bit of flexibility by deviating from the norm. I do on, occasion, live dangerously.

The most often device leading to said variance is food.  You could say that I have a soft spot for cote de beouf, kaki furai, souflee cheese cake, mushroom ice cream… 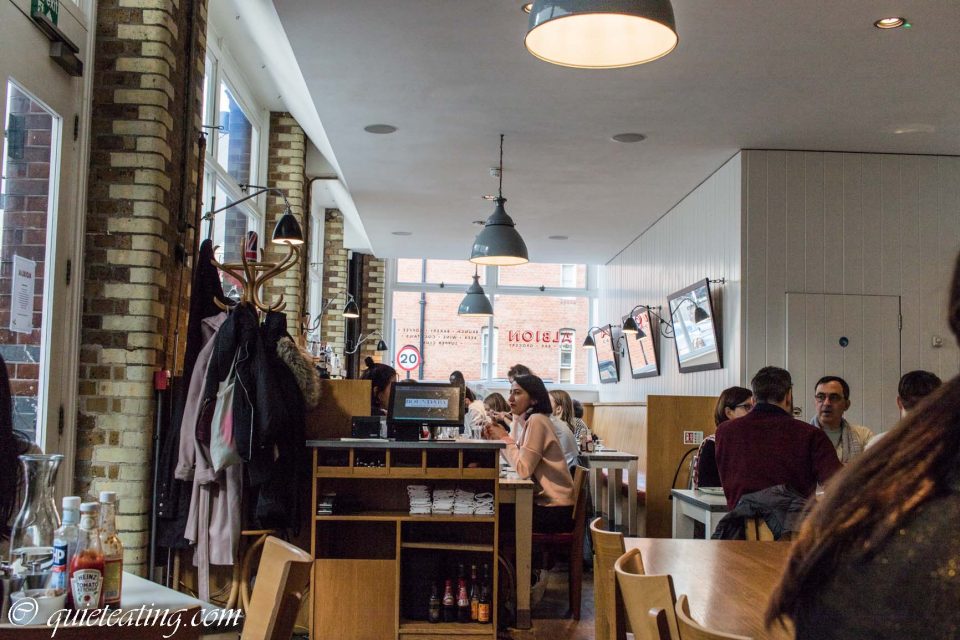 This is my long winded way of explaining how I initially approached Albion.  I was just hoping for a nice cup of coffee but ended up something rather more, similar to the way that sometimes people say they need “just that one thing” from a shop but emerge with such volume that a tractor is needed.  A particular risk around Christmas time.

When I arrived at Albion, I was greeted by a particular effuse waitress who greeted me with a charming “hello!”. Combined with the fragrant smells wafting from their open kitchen. I was lured in for more.  Well hello to you too.  Do tell me more about the smells.  However, first liquid refreshments were dealt with. 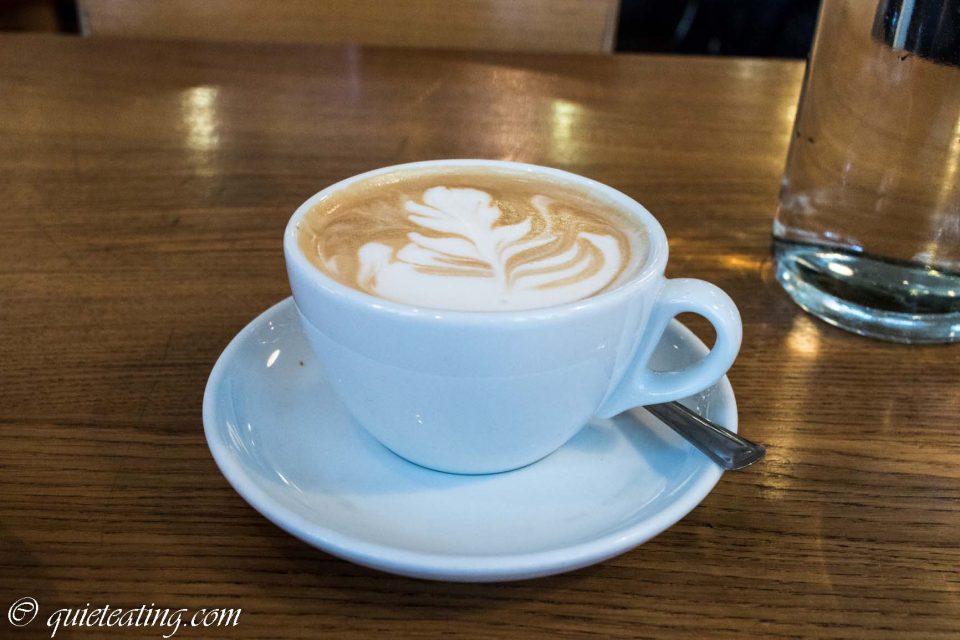 Latte.  This looked elegant and tasted quite good with creamy, milk and delightful depths of coffee taste.  If I was to be picky, I could take issue with their tea stirring instrument.  Their teaspoon could have been a bit more substantial.  It felt like it would bend in a strong breeze.

This reminded me of my days as a poor starving student (some of those words are still an accurate description of me at times).  When I arrived for university and found that I would have to buy my own utensils to avoid scrapping my pitiful attempts at cooking with bare hands into my mouth.  Like any cost conscious student I then promptly went to Poundland for my set of eating implements.  Once I started earning my own hard earned cash, let’s say that that was a irritation was quickly rectified.  It was kind of sad (and annoying) when my spoon would bend if I took a particularly loaded spoonful of food from my plate.

Volume was king in those days (I was a bit of a late bloomer in the size realm). 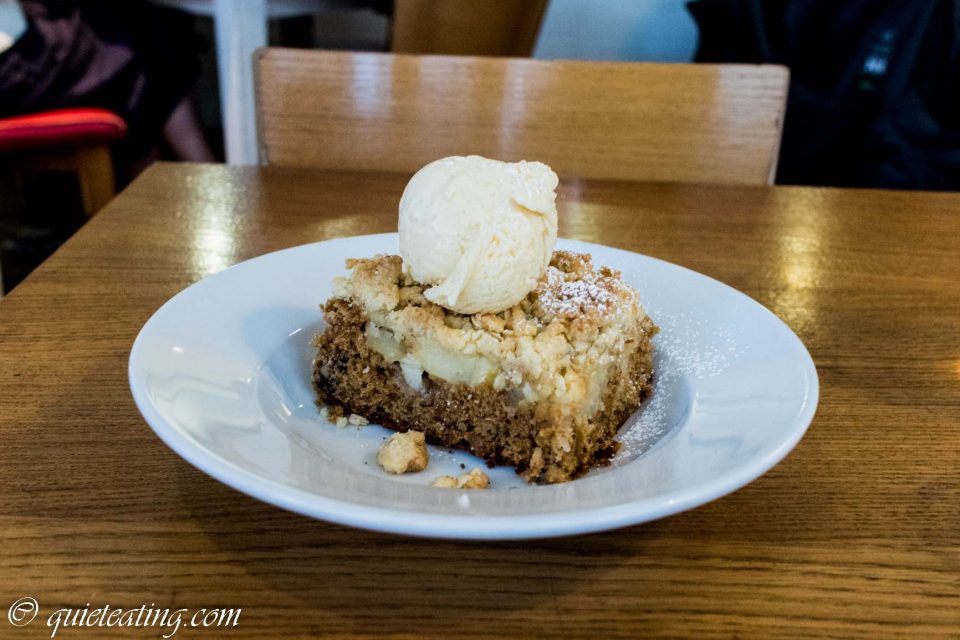 Apple crumble.  However, it was this which quickly made me forget about my coffee.  As I mention before, when I first arrived, my intention was only to have a coffee and contemplate my book.  Yet, as I walked in the door, I was jolted out of my plan as an aroma wafted past me.  Drawn irresistibly towards a tray of golden crumble I knew then I had to have it.  As cheery as the waitress was, the crumble outshone her easily.  So the imploring remarks by the waitress that it was simply excellent fell on deaf ears.  My mind was already made up.

When it arrived at my table, it was a pretty sight.  Then again, from bitter experience, I know that expectation can quickly tank as I have been disappointed more times that I could count.  So with some trepidation I took a bite.  The verdict – this was the best apple crumble I have ever tasted.  Bouncy, airy base, sweet and slightly tart apple filling, deliciously crumbly topping with a light dusting on top.  When combined with the ice cream, it almost made me swoon with the first bite.

At the end of a long table, in an airy room filled with bubbling conversation, I sat down to enjoy my good book (not MY book but a book that was mine) with a great coffee and better crumble.  It was one of those days when I lost track of time as before I knew it, it was finished.  If only the same could be said for Brexit.

On a happier note, with such amazing treats, it would be a crime to not return to try a bit of their savoury foodstuffs.  Then again, not to let things to go their head but they had me at “hello”.

Coffee and a sweet treat was GBP8 excluding service charge.