In attempting to address a profound critic of my writing, I have been forced to undertake a laborious undertaking.

To provide the greatest degree of potential literary amusement, I decided to be ambitious and try for a cheesecake.  If it collapsed, sank or otherwise fell flat, it at least would be a useful metaphor for my deflating standard of writing.

Approaching this with gusto, I soon ran into the first issue.  Making the meringue is an involved process.  I will spare you the intimate details of the eggs and me but let’s say that being forced to hold a blender static for 15 minutes stretched our strand of affection a bit too far.

Next came an exercise in a delicate maneuver.  Folding the egg whites into the batter.  As people that know me will attest, sometimes instructions and action don’t go that well together.  Although in my defence, I did manage the critical action of getting it all in the oven. 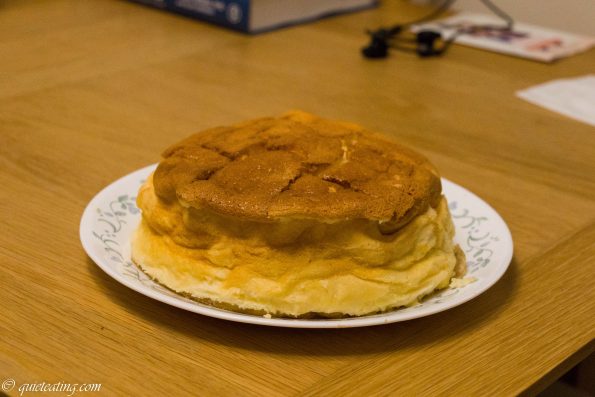 Japanese cheesecake.  Perhaps not the most photogenic of specimens on account of its rapid rise and fall (like some politicians of recent memory), as the top expanded cracked and then proceeded to deflate to a more plate friendly size.  With things more settlted, it was time for a bit of carving. 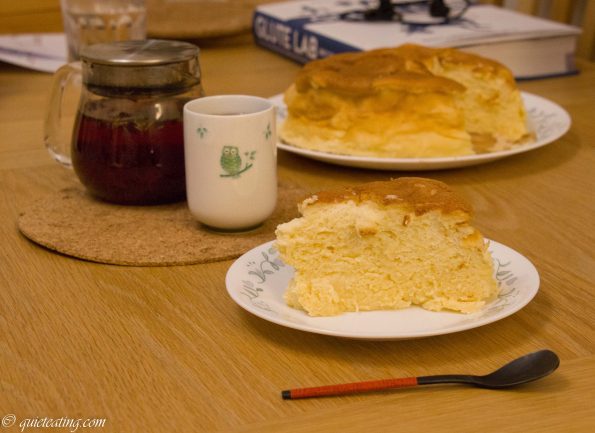 All cut up, dressed up and with some excellent tea, it was time for the taste test.  Approaching this with particular caution (as I made it), on first bite, it kind of flunked as it seemed to be a bit flat. At this point, I thought that maybe baking was not for me.

However, much as I like to give the benefit of the doubt to food other people make, I decided to give it a second try.  On another try, it worked out better as the lemon and sugar flavours burst out in their full glory, a winning combination. I could say that I was surprised but that might invite speculation that all I could do is talk.

Although my satisfied self was thinking of giving myself a pat on the back (metaphoric and literal), perhaps I should instead try to learn something from this process.  I should give things a second chance even when they sound slightly weird.  Although I hope that the same isn’t required of my prose, I do try to avoid repetition of words, cliches or otherwise literary devices.  Yet in trying to keep with the times, let me make this one faux paus.

Not going to lie, specifically, but this was a perfect cheesecake, you know what I mean.  And that is the honest truth.