Apparently the chef of Frog is somewhat of a celebrity. Having placed as a runner-up in MasterChef, Mr Handling did what any self-respecting competitor had to do, open his own restaurant.  This is how I ended up in version 2, based on the strident endorsement of a friend of a friend, dangerous people those are.  The problem with such tangential relationships is that accountability is somewhat far away.  On such occasions, if things did not go as well as I hoped, retribution (or at least harsh words) would be difficult to deliver.

Then again, it seems like Frog has its own reputation for rather caustic remarks.

In my furious and detailed search for feedback on this place (5 minutes on Google served me well), I learnt that this restaurant had a reputation for insulting its diner.  For example, should negative remarks be left online, I noted with high amusement the following:

‘You,’ The Frog wrote in response to a less than complimentary review, ‘are the prime example of an imbecile. If you think we are overpriced, you lead a very sad life… Please never come back or for that matter stick to McDonald’s –  I know it’s a touch out of your price range but try it, you will probably enjoy it.’

Expensive this place is.  Even more so when we were informed, after we sat down, that they only had their more pricey Christmas menu available.  I guess there was some substance to what was said before. 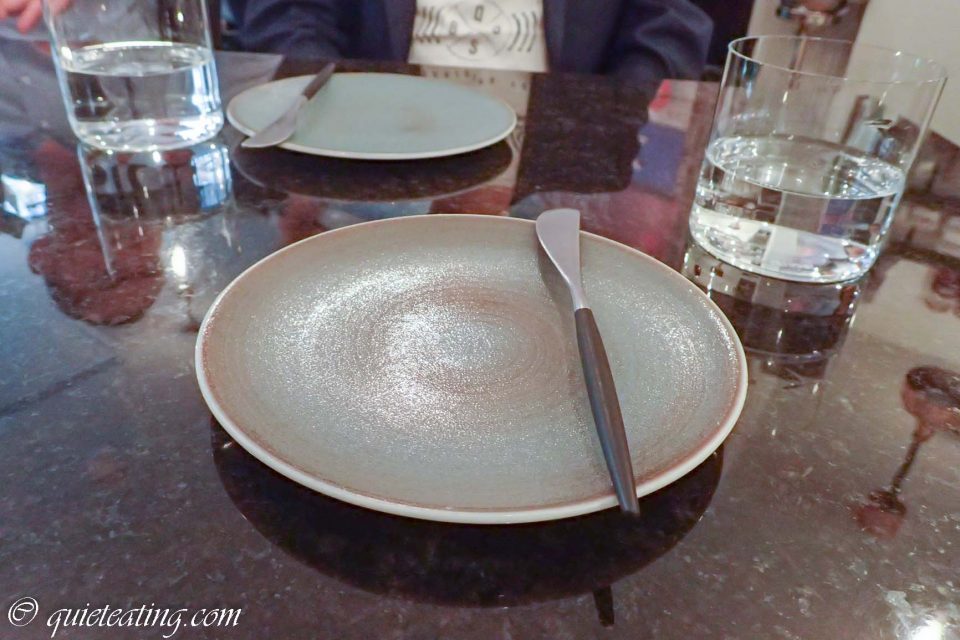 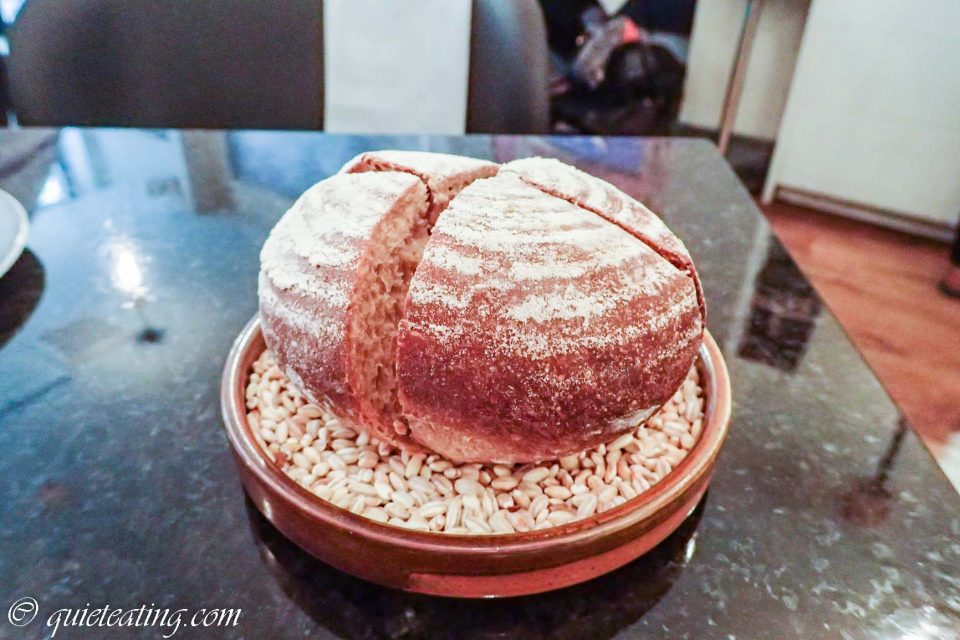 Sourdough bread.  A very round shape. 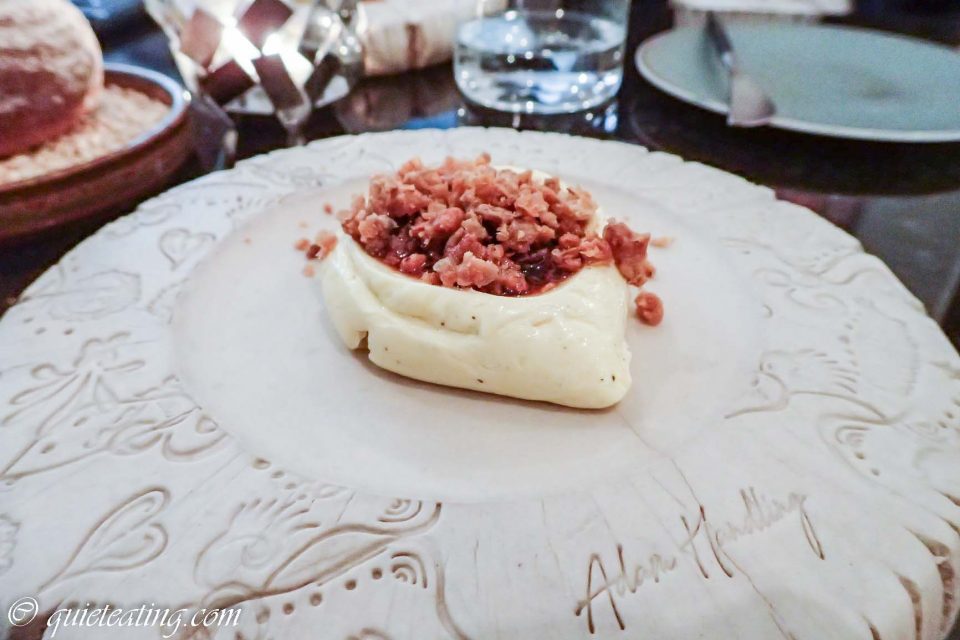 Chicken skin butter.  Rather artfully arrayed butter with fried chicken skin croutons on top.  Yet it was when the bread and the butter combined, that the true magic started.  In recent memory, I am having trouble thinking of a bun to better this.  It was crisp on the outside, airy and bouncy on the inside. And with the butter.  Oh the butter, it was a glimpse of what dreams are made of.  I lathered chicken skin butter lovingly over the bread.  As I inhaled half of the table’s bread, my stomach told me to stop.  Exceptional.  After eating half the bread on the table (sorry fellow diners), I stopped thinking that I should keep myself for other things.  Should have listened to my stomach. 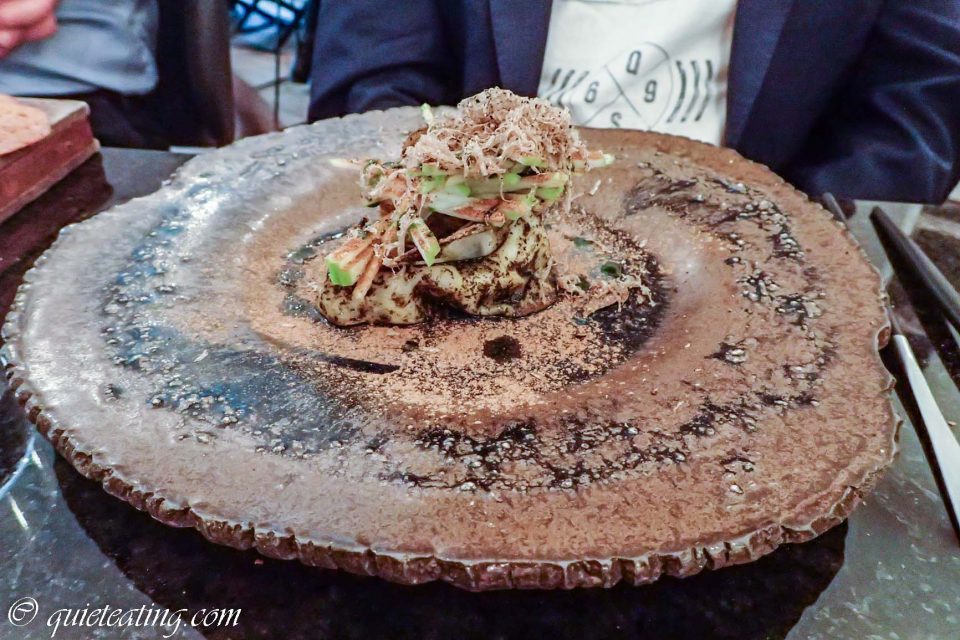 Celeriac, date, lime and truffle.  Of particular note was the intricacy of the celeriac which had been sliced into so thin a sheet that you could easily mistake it for pasta.  Sharp sour taste from a rather full amount of apple sadly masked the taste of the truffle.  It was, to put it in that most irritating and meaningless word, interesting. 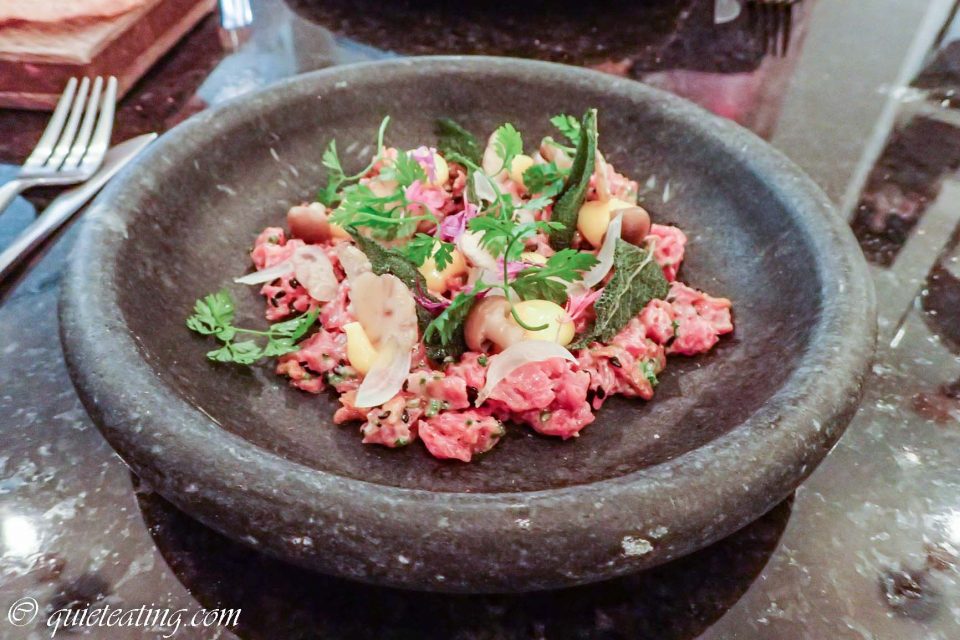 Beef tartar, sage, chestnut.  This was the other starter and was such a contrast that I wondered how it could have come from the same kitchen.  With small yolks of what I guess is quail eggs, this was rather good.  Depths of cow taste, herbs and spices added in just the right amounts and smoothness added by the egg.  This was an inspired take on a classic. 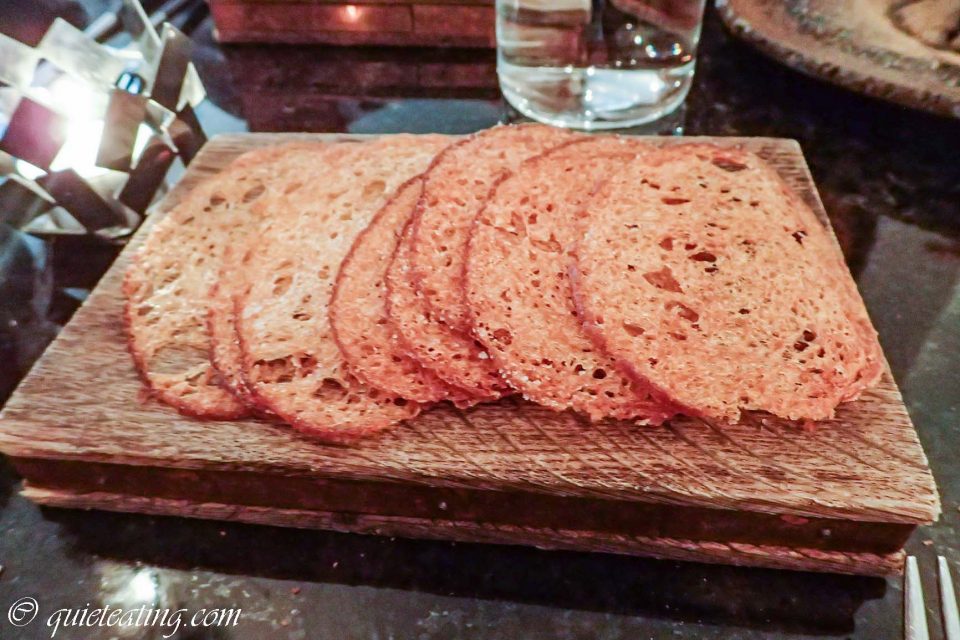 Crisps.  Delightful crisps to complement the yielding flesh of the bovine dish above. 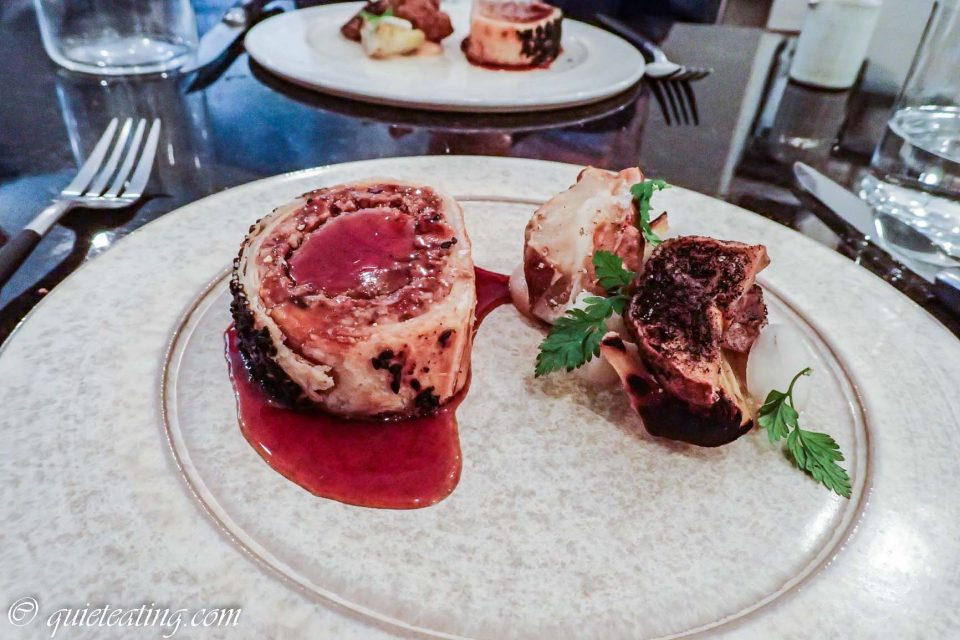 Lamb Wellington, haggis and artichoke.  Led on by the starters, my hopes were unfortunately dashed by this mains.  The lamb was enough for two small lamb pieces while the puff pastry and haggis filled it out for size.  The artichoke was ok but perhaps I would have thought more of it if the meat did not disappoint so much.  It was rather bland and to top it all off, rather small.  I rather not have had it. 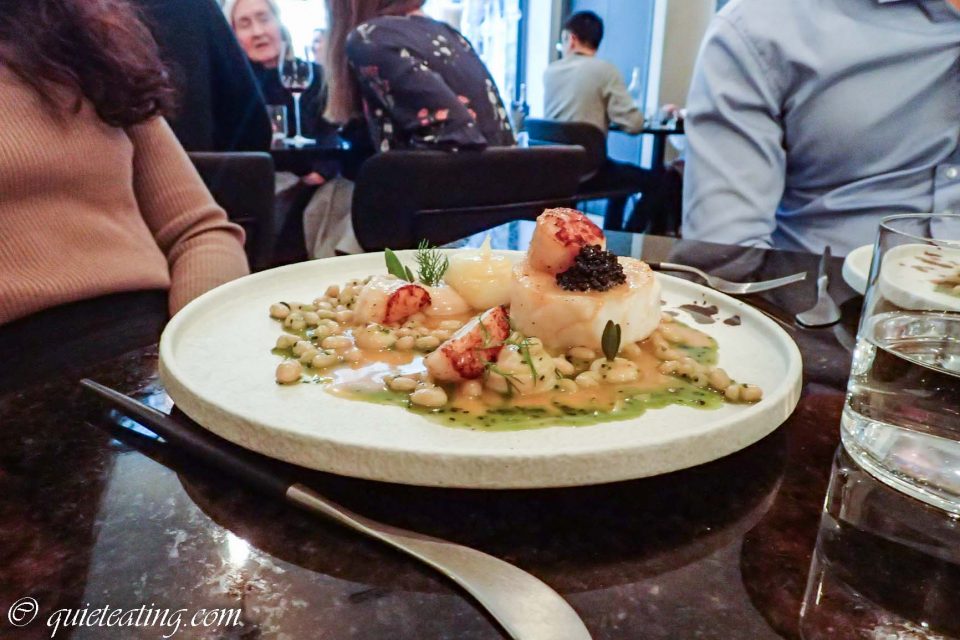 Cod, white beans, scallop and crab.  The better of the mains, this was carefully cooked, alright in taste but somewhat lacking in quantity so I could see some similarities with the lamb.  Meagerness seemed to the the recipe of the day. 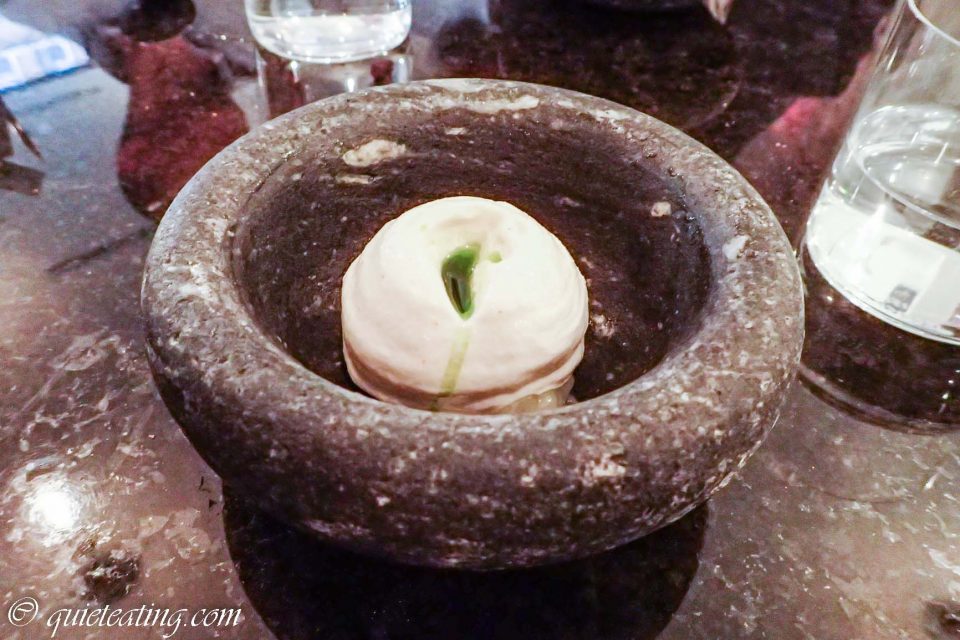 Foam with small cut fruits at the bottom.  I forget the detail of this as it was kind of forgettable. 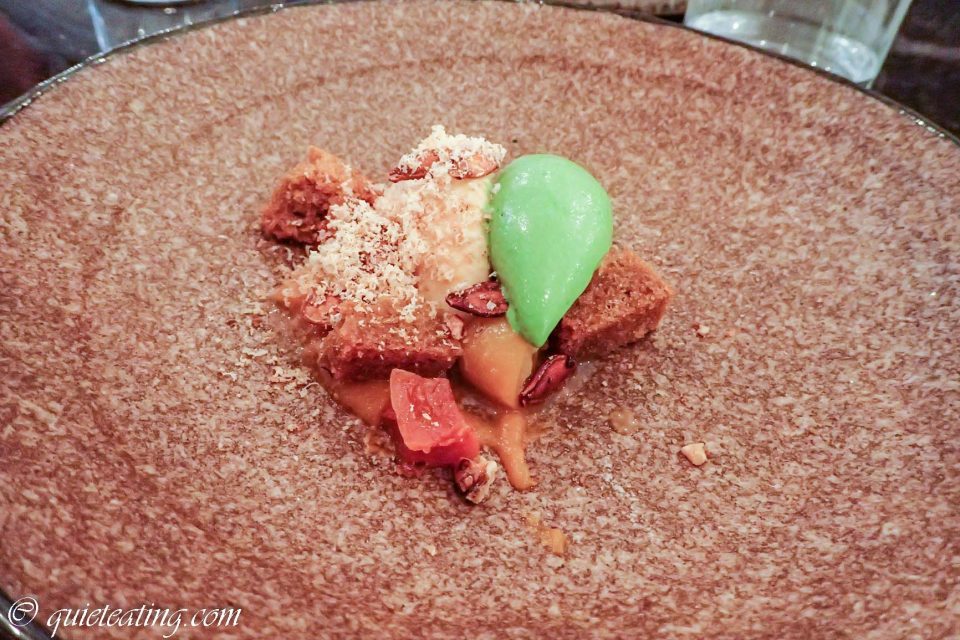 Spice pumpkin, confit kamquat and parsley.  An unusual combination, this was rather surprising.  Perhaps I should have known from the star performance of the sour dough, that bread in this kitchen was the whole reason for coming  The banana bread was something I could easily have spent my whole day eating.  The rest was alright I guess. 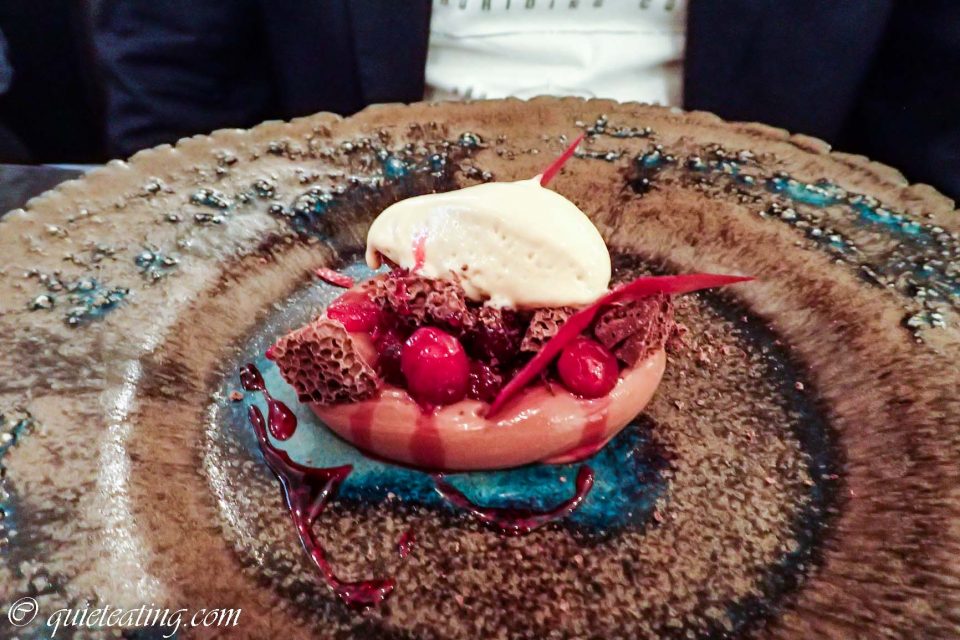 Cranberry, melilot and miso.  Unusual interplay between tastes of salty, sweet and sour with crunchy and creamy texture, it wasn’t really that stand out. 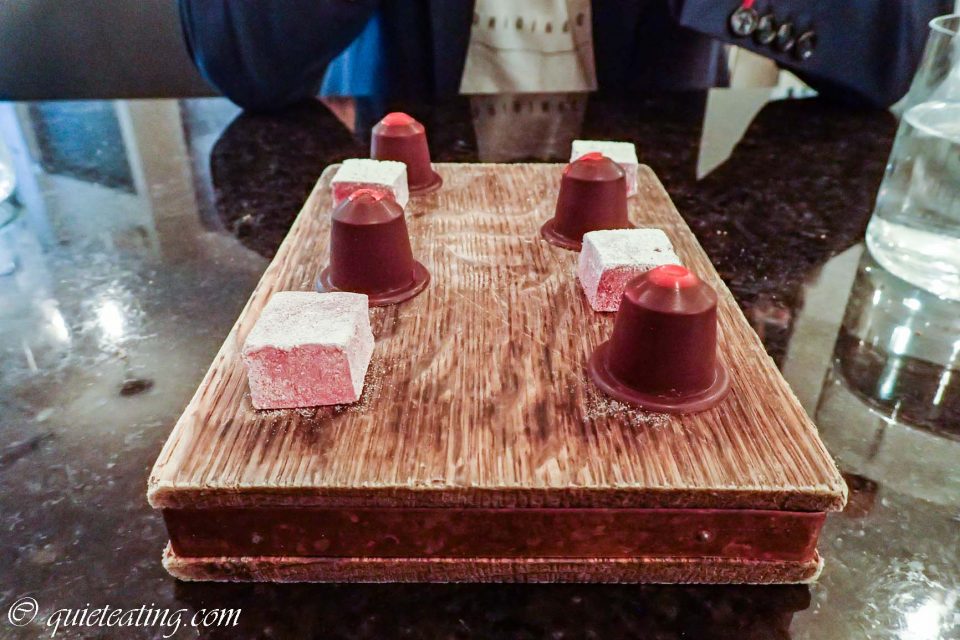 Jelly and chocolate.  Unfortunately, nothing particularly memorable here.  Perhaps they should have finished with some baked goods.  Now that might have gone down well.

As with many things in my life, things started out well.  The bread was exceptional, the butter inspired, the tartar great but things unfortunately seemed to collapse into a messy snowball by the end.  That’s not to say that the tastes collapsed into a disgusting amalgamation but rather that the unusual flavours weren’t to my liking.  Yet perhaps I should thank Frog for something.  There might be some entertainment for me after this review is published.  It would be kind of fun to trade verbal jabs, safe behind my computer, from the Frog team.

Yet perhaps I am being factitious and I should thank Frog for something else.  I really should listen to my tummy.  Life will be better after.  And that’s not pulling your (or a frog’s) leg.