As you can probably guess from this blog, I love my fried food.  In which case, Japan is heaven.  Forget all you hear about Japanese food being comprised of sushi and other healthy stuff.  Although they look dainty, their diet is far from tasteless!

On my recent trip back to Japan I had to visit all my favourite haunts, such as this busy tempura restaurant right next to Shinjuku station. 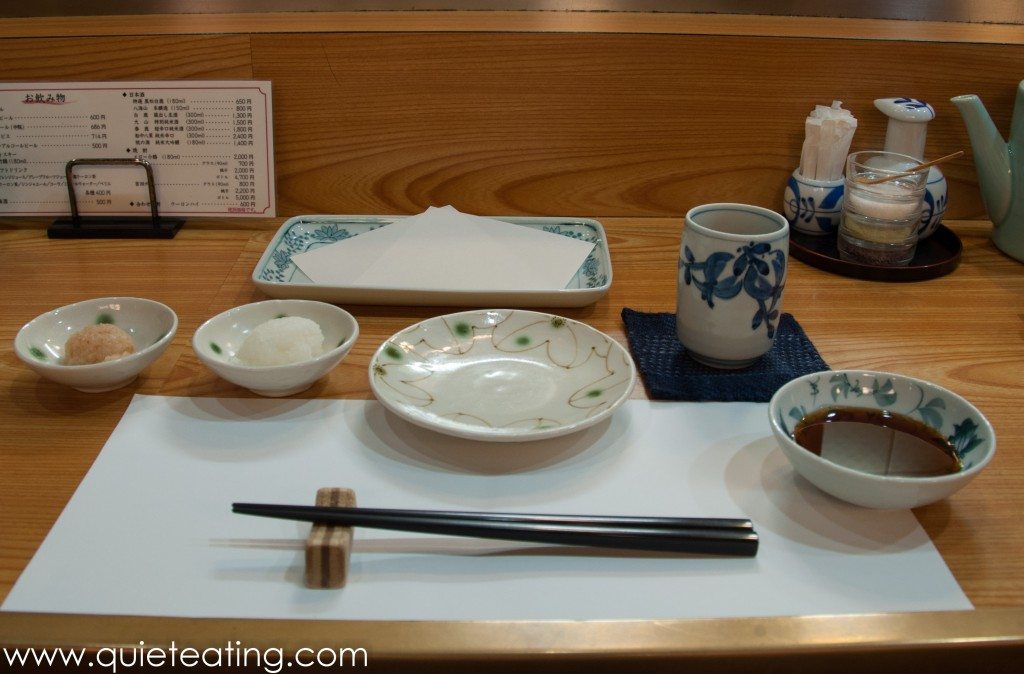 This was the scene before the eating began.  Such a refreshing change from the mess usually to land on your table outside Japan.  From the left going right.  Grated daikon mixed with plum for eating with the fish.  Plain daikon for mixing with the tentsuya.  The dish for the chef to place the fried food right after he cooked it with some rice paper to soak up the oil.  This setup hinted at the difference of eating tempura in Japan.

We were seated at the counter with the kitchen right in front of us so that the chef could watch us eat and time his cooking accordingly so that food always arrived just in time.  Moving along next was a cup of oolong tea to wash it all down and finally the tentsuya.  Tentsuya is usually made of three, parts.  Shoyu (soya sauce), mirin (cooking sake) and dashi (light japanese broth made of kelp and benito flakes).  Oh yes, almost forgot the chopsticks.  Can’t forget those, very important. 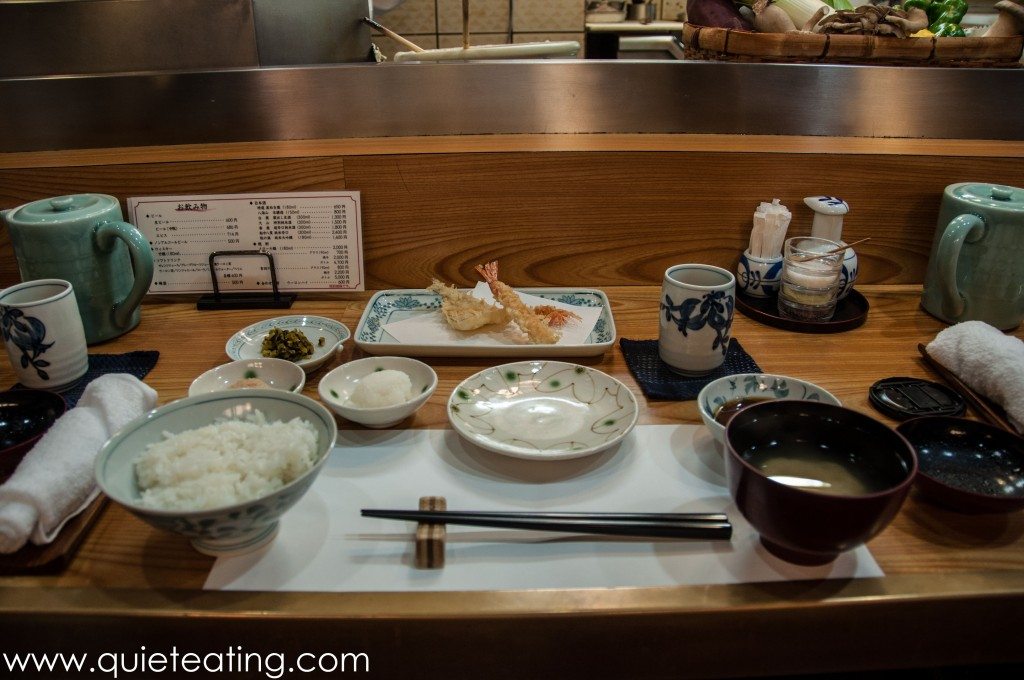 The first arrivals were sakana (fish, white bait I think), ebi (prawn) and ebi head.  Rice, pickled vegetables and miso soup completed the array.  Biting into the sakana brought back memories of delicately fried fish.  The ebi was succulent and cooked just right.  Just the right side of prepared avoiding the rubberiness of prawns which often happens when I attempt to cook.  However, it was the prawn head which brought back memories of times gone by.  I remember when I first tried prawn head I was skeptical about how it would taste.  Would it taste of brains?  Would I attain the IQ of a prawn by eating it’s grey matter?  Such worries were thankfully unfounded.  It tasted like a little ball of fried heaven with the combination of the crunchy texture of the head and savoriness. 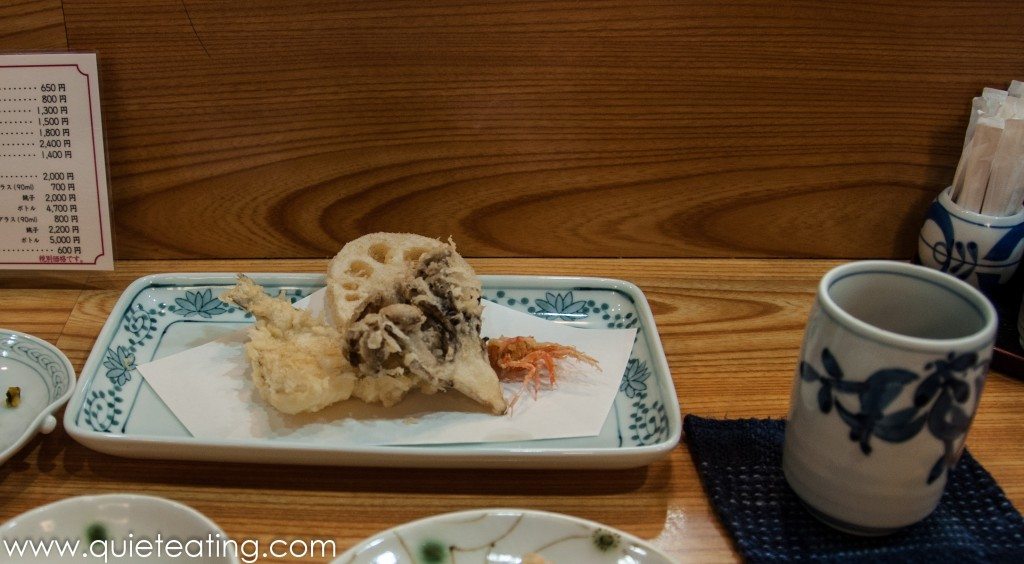 The sakana and ebi head were soon joined by renkon (lotus root) and mushroom (kinoko).  Got to have your veggies.  The mushroom was lovely, meaty in a vegetable type of way and the lotus root added delightful crunch. 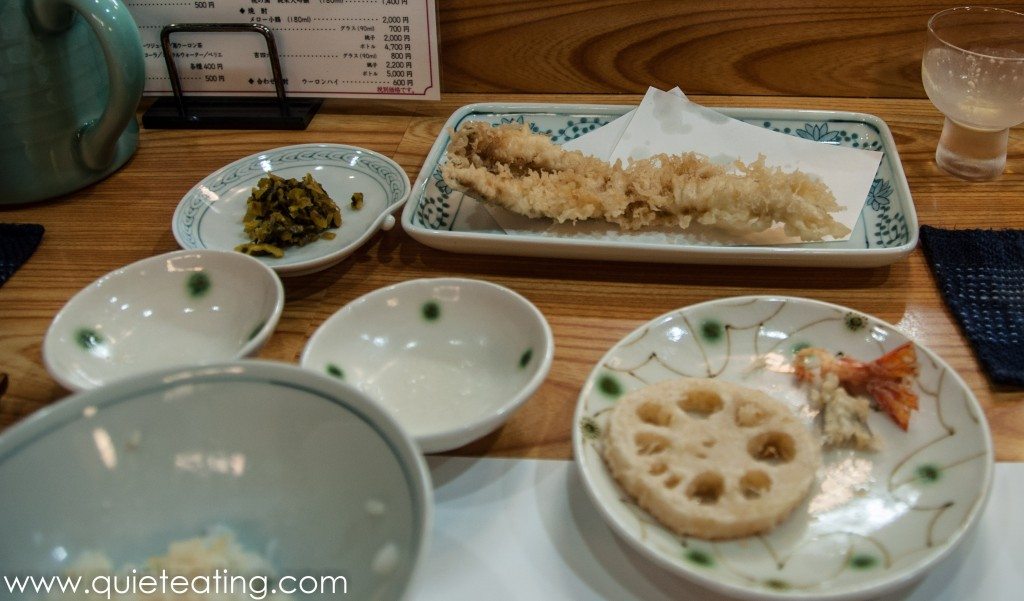 Annago (conger eel).  This, was the star of the show.  Unlike its often seen cousin, unagi (fresh water eel), this family member was born to be deep fried.  With its flaky texture and the fluffiness of the batter, this was the undoubted star of the show.  Now, if only I can figure a way to get these in London.  Maybe I can rear them in the river Thames.

It was lovely to eat tempura in Japan again at my favorite neighborhood haunt.  Although there was a place where I had the best tempura of my life, this trip reminded me that it still remains a go to place when you are passing by.  It’s very easy on the wallet too.  Now I just have to convince them to set up shop in London and all will be well with the world.