I remember when I was small, I would look forward with eager anticipation to airplane food.  As the air hostesses would glide down the aisles handing out their trays, I would wait in eager anticipation.  What I was waiting for with bated breath was soba noodles. 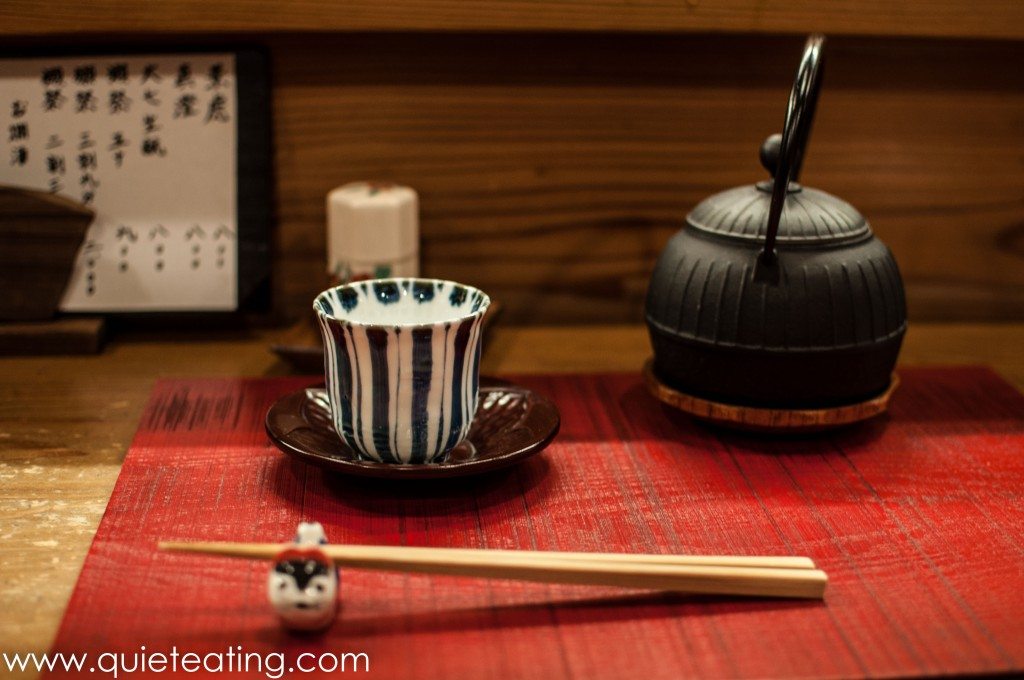 So on my return to the Land of the Rising Sun, I just had to partake in this little treat.  Not just anywhere, but at one of the most famous soba specialty restaurants in Tokyo.  So famous that it ended up featured in the New York Times. Now if only I could get my photos in there…  but I guess the Times isn’t too shabby.

When arriving at this hidden restaurant in the middle of a residential district in Tokyo, first of all, the important thing is to get the mood right with a lovely little tea made of soba kernels.  With an earthy and smooth taste, I loved it so much that I had to take some back home to try myself!

I digress.  As there was another adventure to be had. 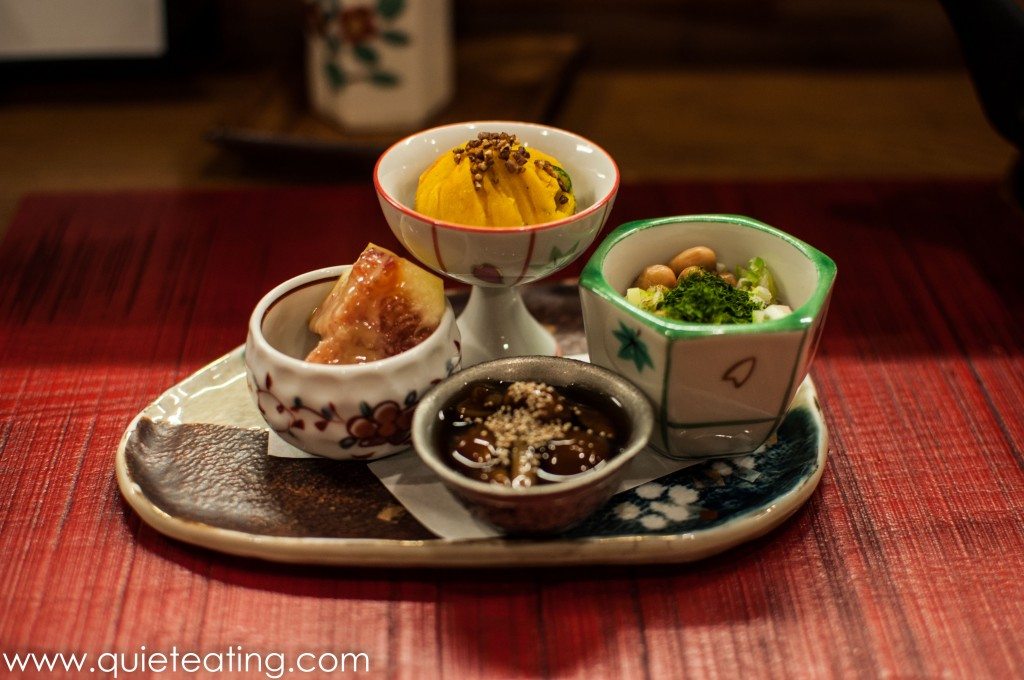 To start, from the top going clockwise, a little plum with toasted soba seeds on top, miso beans with some green veggies, beans and eggplant. Fresh and unusual flavours showcasing the delights of Japanese vegetables.  The lack of seasoning really brought out the natural flavours of the dishes. 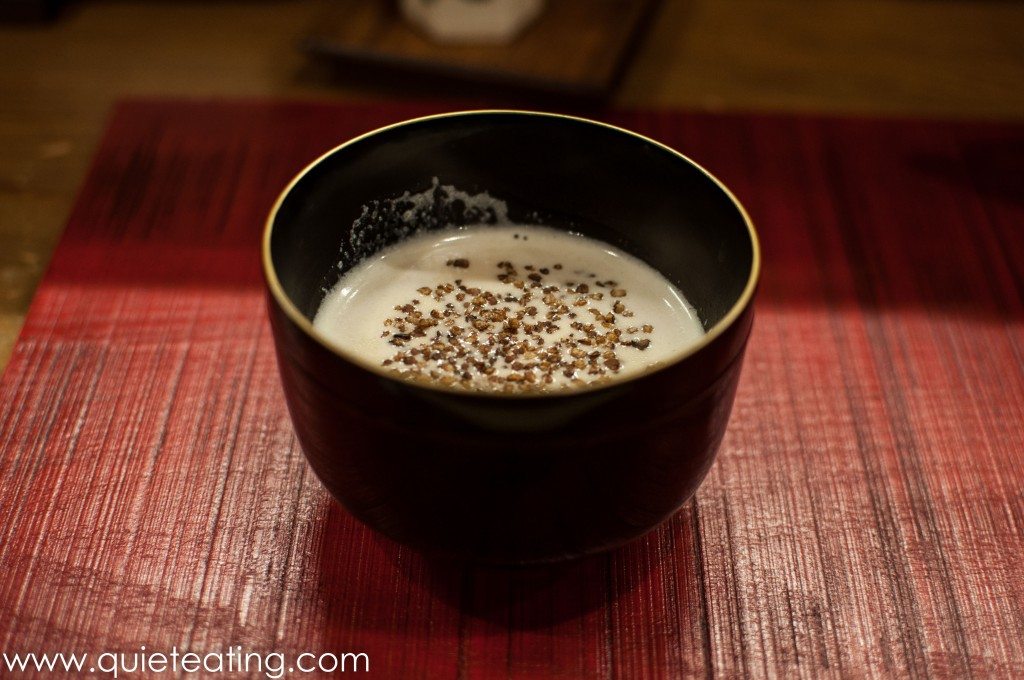 Soba milk soup.  I think this is the best soup I’ve ever had, hands down.  With a creamy but light texture made from blended soba, the experience was heightened by toasted soba seeds giving a little added crunch. 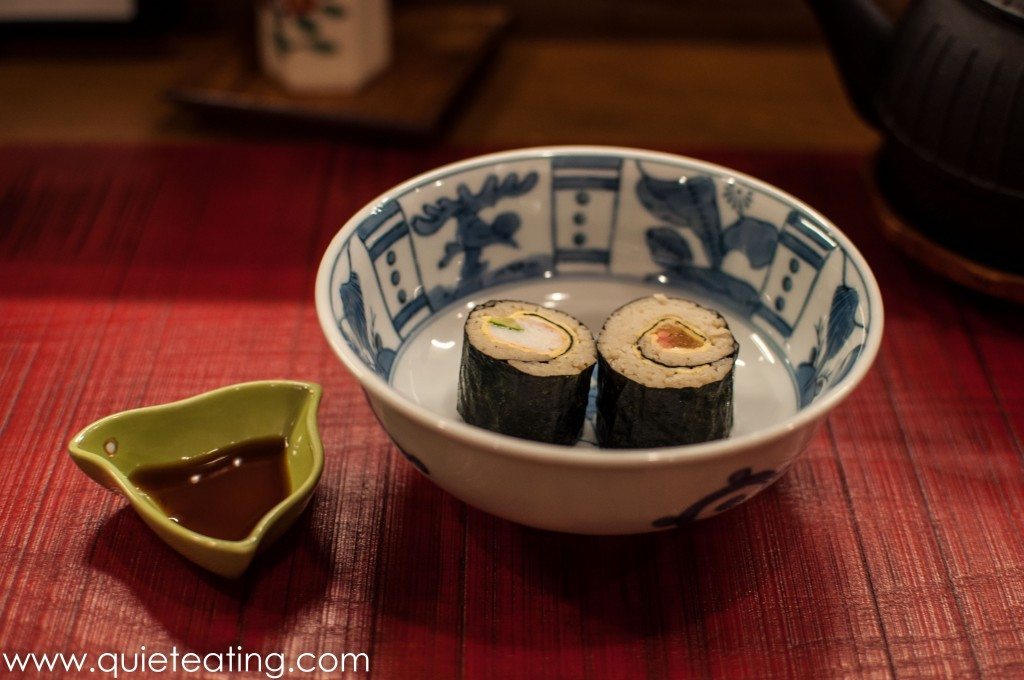 As I bemoaned in a previous post, Japanese food is not ALL about sushi.  But it is a bit sometimes.  A small little sushi set to start with shrimp and plum.  Although that’s not rice!  It’s a soba filling.  The soba gave an unusual and good earthy taste as compared to the usual rice filling. 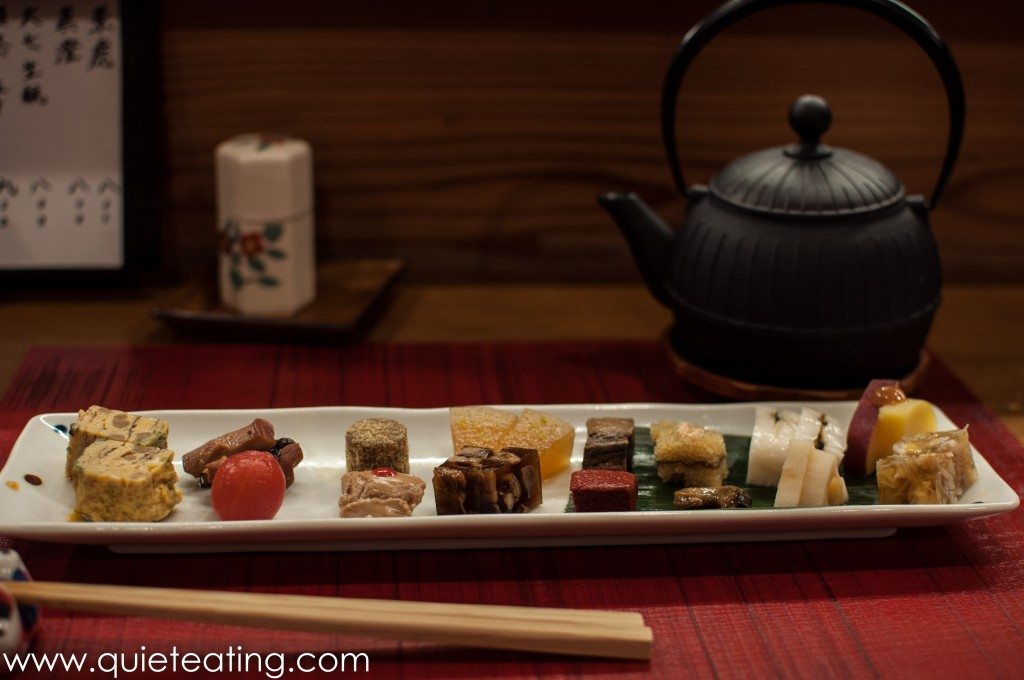 I am guessing about some of these as I couldn’t catch what they were.  This was our set of many many different tasters.  Starting from the top left going clockwise.  Egg, pickled vegetables, cod eggs, jelly something, jellied tuna, salmon testicles, mackerel sashimi, yam, gelled mackerel, lotus root, mushroom, fish liver, mushrooms, liver pate, the juiciest tomato I’ve ever had and egg.  The very varied and rare dishes were interesting and differed widely in taste.  I will never forget the salmon testicles though.  When my fellow diner asked whether these were eggs, the response was, its that “other” thing.  Much fretting followed accidental consumption. 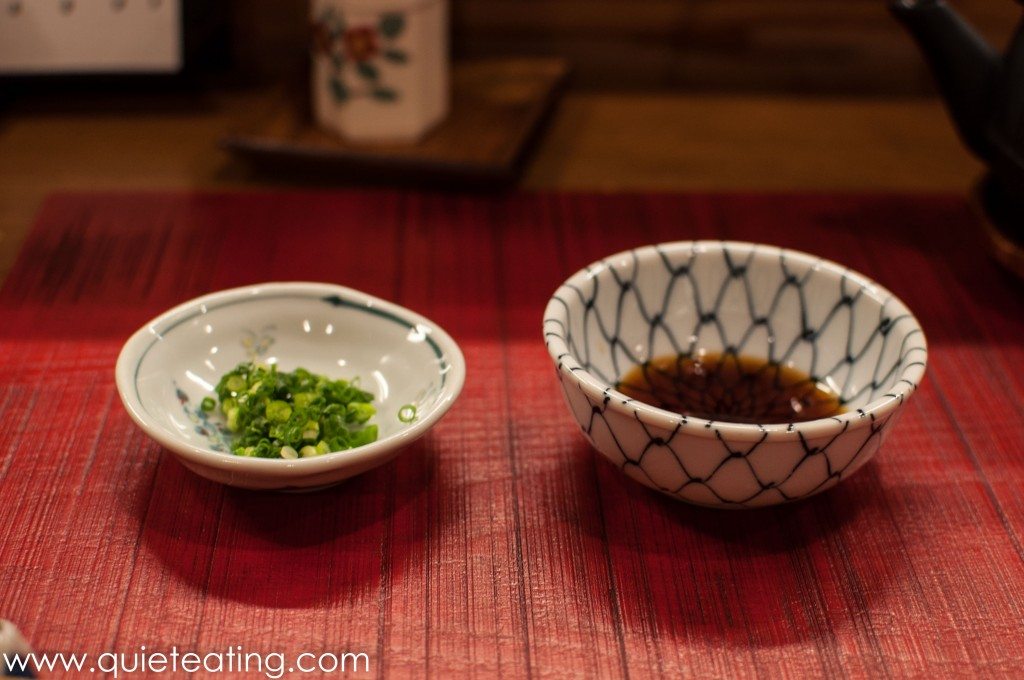 The main event was still to come.  To add to the anticipation, the chef placed a dipping sauce of soya sauce and negi (spring onions) in front of us. 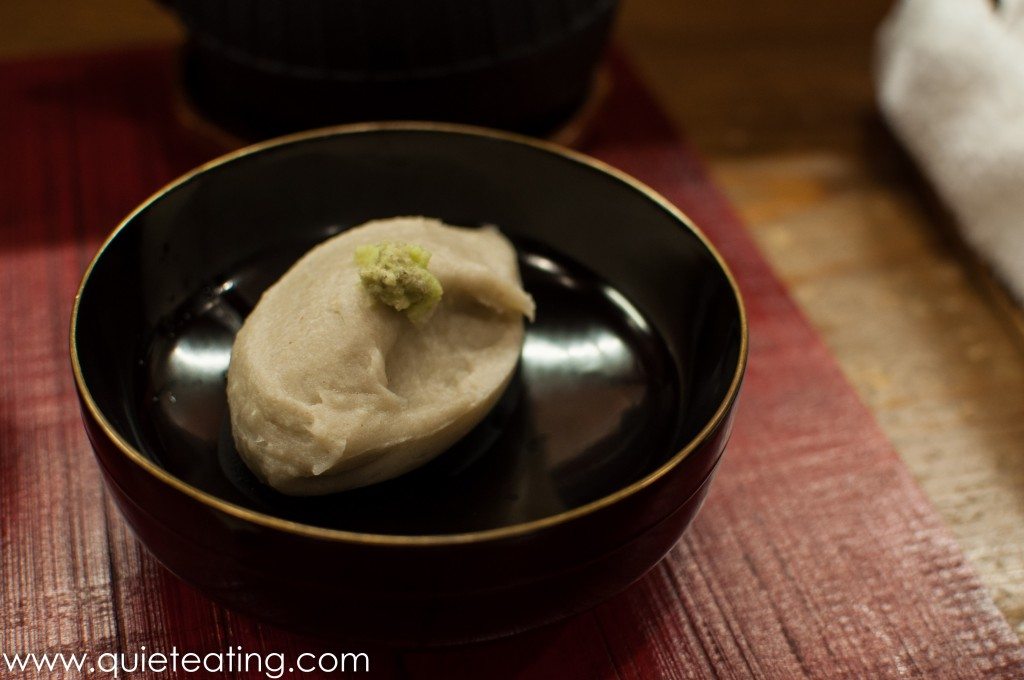 First there was a little treat though.  An unusual glimpse into what soba noodles come from.  A soba dumpling.  The first time I ever laid eyes on something like this.  It was delightfully unrefined bursting with soba taste.  This is what they flatten and chop to make soba noodles. 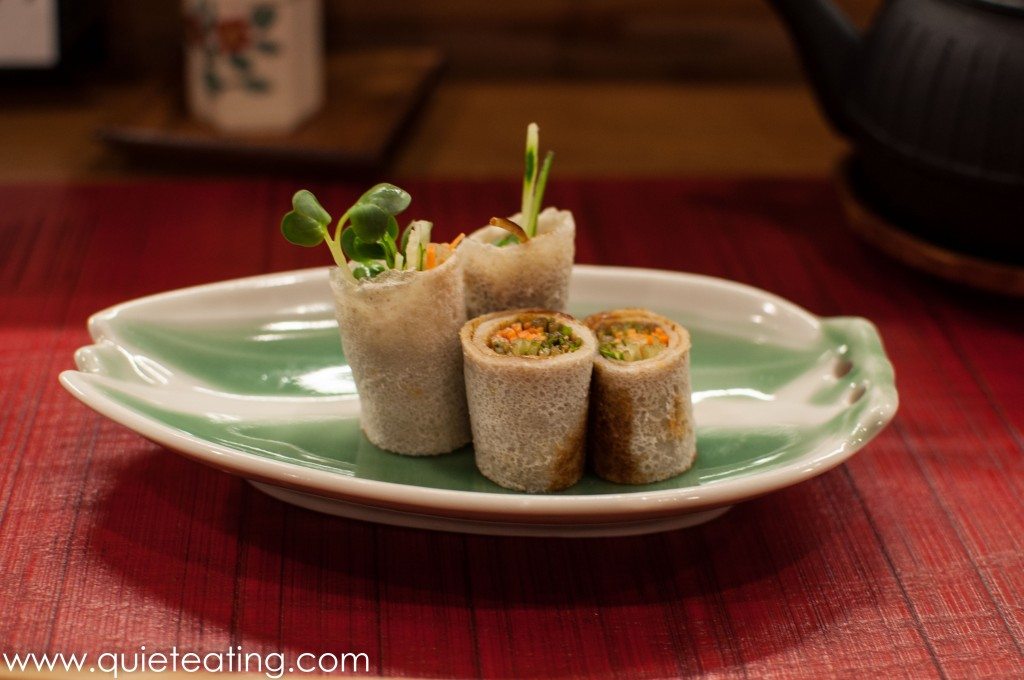 A crepe of vegetables made out of – you guessed it, soba.  Artfully arranged, it tasted better than it looked.  Now I am usually one to turn my nose up at anything that isn’t meat (why should I get excited about something which you didn’t have to chase down) but this was different.  The buckwheat flavour mixed with the prime vegetables almost made me forget my usual dislike of the vegetarian kind. 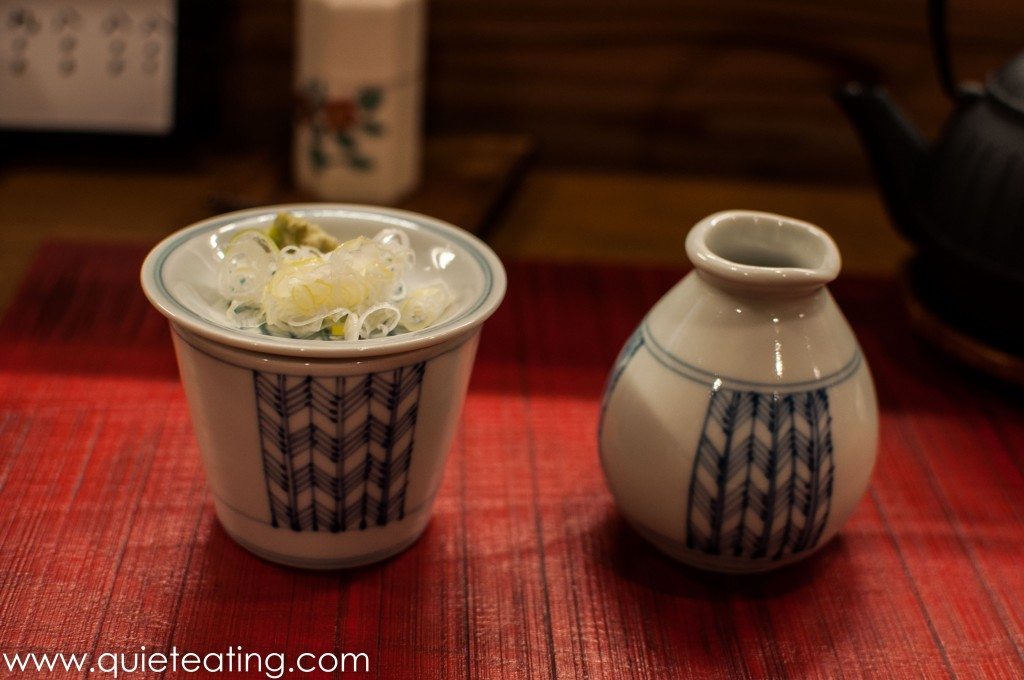 Yet, all of these surprises were just building the anticipation for the main event.  Soya sauce, negi, wasabi and a bowl to mix it all together. 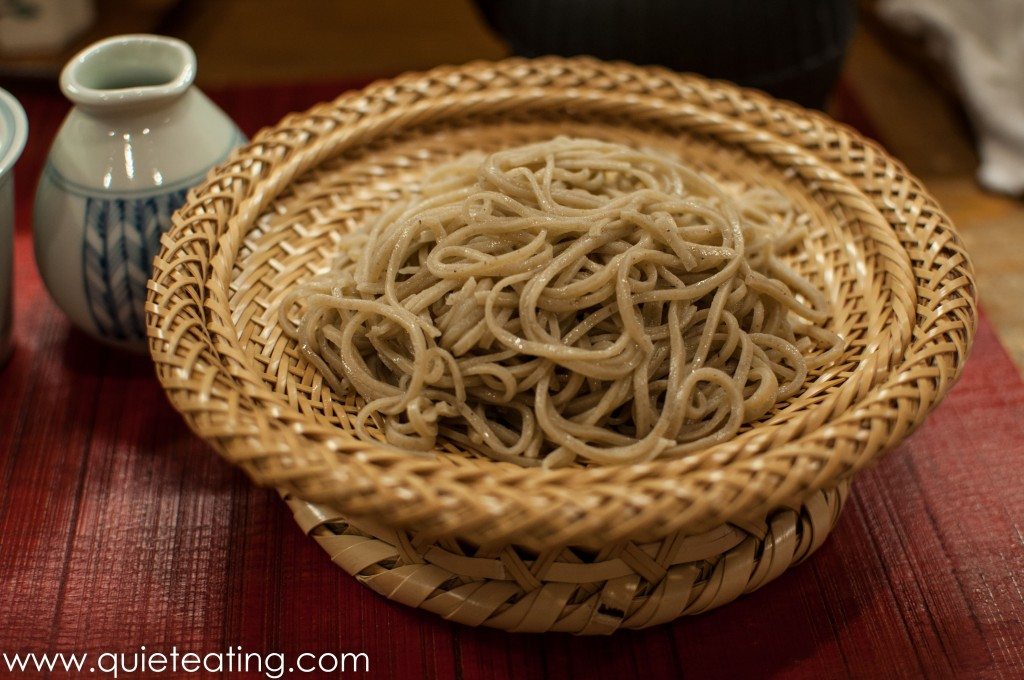 At the end, the reason for coming.  Lovely soba.  With a smooth, silky and refined texture and taste, I think I almost swooned.  It was so good but unfortunately my eyes were bigger than my stomach so I had to stop after just one serving.  However, that did not hold back my friends who asked for a second serving and attacked this with gusto.

The four of us were served personally by the chef as my friend had managed to persuade the master to open the restaurant especially for us. He even deigned to show us his intricate pottery collection.  I have a little weakness for Japanese pottery myself so I had to drag my awestruck self away at the end of this  meal.  A private little dining party for us, what more could I ask for?  Maybe a pretty Geisha to serve the food though.  Hmmm…

I think this deserves my highest rating yet.  A quiet eating 9.5/10.